The strong expected growth in aircraft deliveries to China will create a vast aircraft servicing and financing opportunity, for those that have the resources to participate. But two separate transactions yesterday by Hong Kong-based Cathay Pacific offer a perspective into how the landscape is changing.

Cathay announced plans to sell 20.7 million shares in Hong Kong Aircraft Engineering Co Ltd (HAECO), representing 12.45% of its shareholding, to its parent, Swire Pacific. The transaction is valued at approximately USD245 million. If approved, Cathay Pacific's direct interest in the issued share capital of HAECO will decrease from 27.45% to 15.00%, while Swire Pacific's stake in the maintenance provider will rise from 33.52% to 45.96%.

In a joint statement, the companies declared, "the transaction will bring clear advantages for all parties concerned. From a Cathay Pacific point of view, it will improve the airline's cash position during an extremely difficult time for the aviation industry. At the same time, the carrier will retain a strategic interest in HAECO. The transaction will enable Swire Pacific to make a significant increase in its strategic investment in HAECO on terms it regards as appropriate. At the same time, it affirms Swire Pacific's long-term commitment to Cathay Pacific and HAECO in particular, and to Hong Kong aviation in general".

HAECO's shares were up 0.4% yesterday.

Cathay also signed a purchase and leaseback agreement yesterday, with BOC Aviation, covering six of the carrier’s 19 B777-300ER aircraft currently on order. BOC Aviation stated that 24% of future delivery commitments are destined for China and widebody aircraft will account for approximately 16% of its fleet by mid-2013 when all current orders and committed purchase and leasebacks have been delivered.

Meanwhile, French Aerospace supplier, Zodiac Aerospace, is painting a mixed picture of its outlook for the remainder of 2009 and 2010. The company’s results in 2009 have been boosted by better exchange rates and acquisitions made at the end of FY2007/2008, rather than any organic growth.

Fourth quarter results were even slower, with revenue growth of 0.4% (-11.2% organic growth). Only the cabin interiors segment reported any revenue growth.

Aircraft systems was the best performing revenue segment for the full year, although cabin interior revenue surged 17.8%, due to the acquisition of Driessen, TIA and Adder last year. While revenue is still growing (+11% in Q4) the segment is feeling the effects of Embraer’s reduction in E-jet production rates, as well as a general slowing in the commercial aircraft seats segment.

The company expects to better its debt reduction target, due to strong operational cash flow and rising current operating income. The growth in operating income will be less than originally forecast in Apr-2009, with Zodiac reverting to a single digit income target, rater than the “20% plus” under its previous agreement. The shortfall in operating income is expected to be almost offset in terms of net earnings and earnings per share by lower than forecast financial expenses and one-off reductions in tax liability. 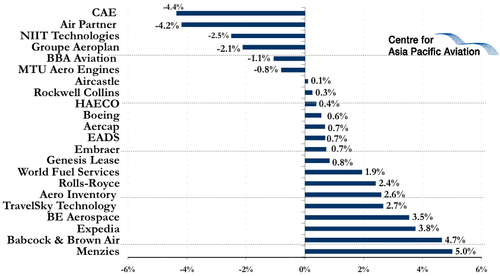