Boeing “redrawing the lines” on the B787 programme

Media reports are today suggesting the B787 may not fly before the end of 2009, potentially adding another six months of delays to the programme, and that a decision on how to implement a permanent solution for production aircraft has not yet been made. Production is rumbling ahead nonetheless, with Boeing now assembling major structures of B787 number seven - the first production model bound for All Nippon Airways.

Jim McNerney, Boeing’s Chairman, President & CEO, stated yesterday, when presenting the company’s financial results, that the manufacturer is now “learning from our lessons on this programme and will not hesitate to take the steps necessary to ensure its ultimate success, even if it means redrawing some lines that were established when we first started”. Boeing recently announced its agreement to acquire Vought's South Carolina facility, which supports the 787 programme and could eventually form the backbone of a second production line.

A new production schedule and test flight date for the aircraft are yet to be announced, despite Boeing’s assurance after the delay of the June flight that it would announce a new test flight date "in a few weeks". A “thorough and comprehensive” plan is now due to be announced by the end of the current quarter, once engineers have decided on a plan to implement the fix for the wing-to-side-of-body stress problem.

"Better technical and enterprise discipline, internal and external supply chain changes, tactical adjustments to the B787 operating model, changes to processes and organisation" - these are the behind-the-scenes structural issues Boeing has acknowledged it is having to fix to get the B787 programme back on track.

Despite the good results for the first half of the year, Boeing’s earnings guidance for 2009 remains unchanged between USD4.70 and USD5.00 per share. The revenue guidance was reaffirmed, at USD68-69 billion for the year.

Much is still dependent on the B787 programme, however, with the cumulative impact of schedule delays putting pressure on the programme’s profitability. Boeing intends to re-evaluate financial guidance upon completion of the B787 schedule assessment.

Boeing's shares traded positively immediately after the results were released, but drifted lower in afternoon trade, to close down 2.4% yesterday. 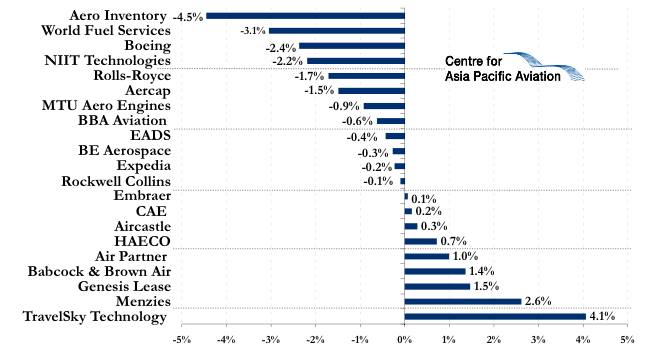