Boeing Commercial Airplanes has revealed it has commenced work on the wing to side-of-body stress point problem on the B787 static airframe and first aircraft, paving the way for a test flight later this year. Boeing shares were down 1.1% on Thursday.

The news comes as a welcome boost for suppliers, which have been suffering recently from the delays to the aircraft and the general downturn in aircraft production and aftermarket ordering. French aerospace manufacturer, Latecoere, which manufactures doors for the aircraft, announced in mid-Sep-2009 that it would cut up to 1,000 jobs and request compensation due to the delays in the B787 programme.

Boeing has admitted that its outsourcing policy for the B787 was flawed, and it would not pursue some of the same avenues if given the choice again. The company has stressed that it is still committed to the outsourcing production system, but is pulling in several suppliers closer to home to allow it to exercise more supervision and control. The company invested USD1 billion in July-2009 to acquire Vought’s South Carolina facility, which manufactures B787 aft sections. It could also use the plant as the basis for a second B787 assembly line.

Work on the B787 modifications are expected to take 30 days, clearing the B787 for its much anticipated first flight in late Nov-2009 or early Dec-2009. Getting the B787 into the air before 2009 is a crucial test for both the programme and for Boeing. Oman Air, for one, announced yesterday that it will make a decision on whether to retain or cancel its order for six B787s once the aircraft takes flight.

Lessors down in uncertain leasing market

Lessors' shares were generally down yesterday, due to lower US and EU markets. Babcock and Brown Air traded down 7.1%, due to continuing uncertainty over its future and the future of its parent, Babcock and Brown Group, after news that two thirds of the group’s debts are now owned by hedge funds. Babcock & Brown Air is still up for sale, along with larger lessors such as AIG’s ILFC and Royal Bank of Scotland’s Aviation Capital business.

While most leasing companies are reporting high portfolio utilisation, and an improving outlook for 2010, there is continued uncertainty in the leasing market, with the failure of lessors to find buyers raising speculation that they could be offered at significant discounts to already damaged book prices.

Other lessors were not as badly affected by the general market slump. Aircastle lost 2.5%, while Aercap and Genesis Lease traded down 1.2% and 1.3%, respectively.

After a ratings downgrade on Wednesday, B/E Aerospace lost 5.8% in trading on Thursday. 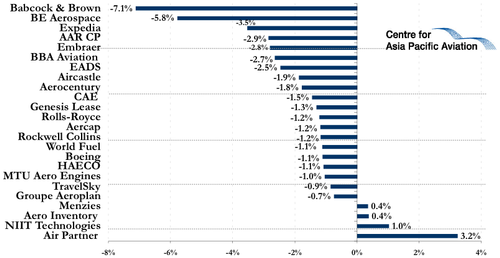