Aircastle has a portfolio of 131 aircraft and its expects utilisation to remain at or above 98% over 3Q2009. The company is actively managing its portfolio and reducing its exposure to some markets, such as India, Mexico and Eastern Europe.

Demand for aircraft remains soft and Aircastle expects the lease market will likely lag the overall economy in its recovery, as airlines take a cautious approach to their fleet plans.

The company is optimistic about a modest recovery in 2010, but is taking a conservative approach to portfolio management by ensuring placements ahead of lease termination, keeping new lease terms short and continuing to emphasize better credits and jurisdictions by choosing lease counterparties.

According to CEO, Ron Wainshal, interesting growth opportunities are starting to materialise.The CEO stated that the current environment “presents a great opportunity” as capital remains scarce for the aviation industry and, many lessors and airlines have significant long-dated financial commitments that will be very difficult for them to honor.

Airbus has 118 net orders for seven months to July

Airbus meanwhile updated its orders and deliveries website, announcing its has received net orders of 118 aircraft for the seven months to Jul-2009. The European manufacturer has suffered 22 aircraft cancellations (including three A318s, three A319s, five A320s, four A321s, one non-commercial A330-200 and five A350-800s) this year, balanced against 140 gross orders.

Airbus is maintaining its outlook for up to 300 (gross) orders for the year and plans to plans to deliver at least 483 aircraft this year, including another ten A380s. Airbus parent, EADS, was up 2.4% on Friday.

Meanwhile, Boeing was up 2.6%, as the manufacturer continues to claw back ground on its own order book. It has booked 40 orders for the year to date, confirming an order for eight B737s from EgyptAir. With 129 (gross) orders Boeing lags only slightly behind Airbus in terms of net order numbers, but the 89 cancellations this year (mostly B787s) have weighed down its order book. 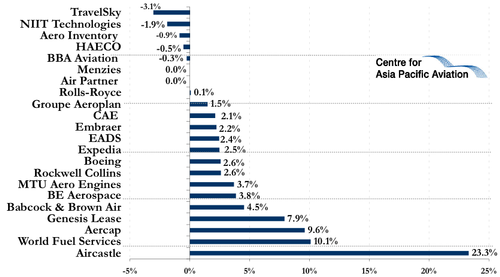