Bodi Group, one of the largest corporate conglomerates in Mongolia, is launching Mongolian Airlines, a new domestic airline in Mongolia. The carrier, which appears to be affiliated with MIAT Mongolian Airlines, will compete with former MIAT subsidiary company Aero Mongolia (owned by Newcom Group) and Eznis Airways (owned by Monnis Group). According to reports in the local media, an agreement on the establishment of the airline has been signed between Bodi Group and MIAT, enabling Bodi to ultimately benefit from the planned privatisation of MIAT in coming years.

While details are being slowly confirmed, Nordic Aviation Capital CCO Jim Murphy confirmed to CAPA that it has sold the carrier a Fokker 50 aircraft (local media reports had stated Nordic Aviation Capital leased the aircraft to the carrier) to support the launch of operations. The carrier, based in Ulaanbaatar, reportedly plans to gradually increase its fleet to four aircraft, according to reports from the Business Council of Mongolia. Aero Mongolia, a former domestic arm of MIAT before it was sold to the Monnis Group in 2001, also operates Fokker 50s. There are three Fokker 50s in service in Mongolia at present, according to OAG Fleet iNet, with regional aircraft comprising 75% of the nation’s fleet.

Mongolia fleet breakdown for aircraft as at 12-Dec-2011 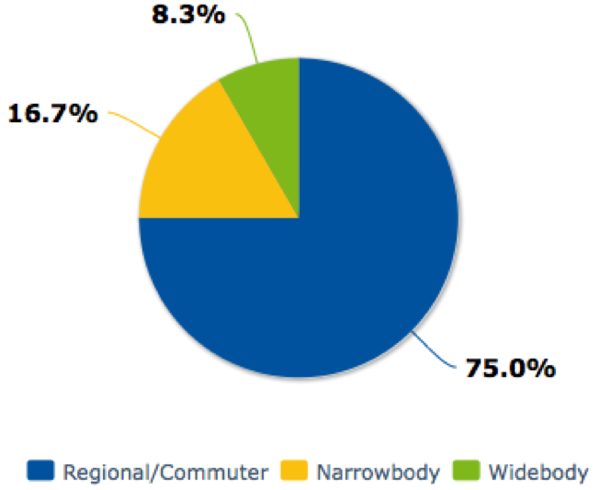 Bodi Group is one the largest business groups in Mongolia with 13 subsidiary companies and six JVs, and a workforce of over 1400 employees. Bodi Group, established in 1993, is engaged in the fields of banking financing, property development, real estate, media, trade and services. The Bodi Group has representative offices in Beijing, Berlin and London.

Mongolia is the second smallest of the 24 aviation markets in Asia after Bhutan, with fewer than 15,000 international seats and a domestic market which, up until now, has only had two competitors. In addition to Aero Mongolia and Eznis Airways, Blue Sky Aviation, Central Mongolian Airways and Sky Horse Aviation have been granted Air Operator's Certificates but are not operational.

Eznis Airways, which launched commercial services five years ago on 06-Dec-2006, has the largest network of domestic destinations in Mongolia and the highest frequency on these routes. The airline was established in Dec-2006 by Newcom Group, one of the largest holding companies of Mongolia. Its history and milestones is in the background information section.

Since its launch, Eznis Airways has operated 15,450 services and transported over 343,122 passengers. The airline now serves a route network of 14 domestic and two regional destinations with four 34-seat Saab 340B and two 93-seat Avro RJ85 aircraft. The carrier took delivery of its most recent Avro RJ85 in Jun-2011, with the aircraft deployed on domestic services and used to operate charter services for mining companies. The aircraft was financed by Khan Bank.

The first scheduled service of Ulaanbaatar-based Eznis Airways was from Ulaanbaatar to Choibalsan, with the carrier subsequently expanding to cover 14 destinations in Mongolia including Dornod, Bayankhongor, Khuvsgul, Umnugobi, Khovd, Uvs, Zavkhan, Bayan-Ulgii, Gobi-Altai and Uvurkhangai through charter and scheduled operations. The carrier also operates international services to Hailar in China's Inner Mongolia region and Ulan-Ude in Russian Federation's Buryat Republic, and charter services to points in China, Russia and Kazakhstan. “In the future, Eznis Airways plans to [enter] new markets and also increase flight frequency to currently served destinations,” the carrier has said. The carrier has authorisation for, but does not yet operate, international services to other points in China, Russia and Kazakhstan. The carrier also plans to expand through strategic partnerships with other airlines, it has said. 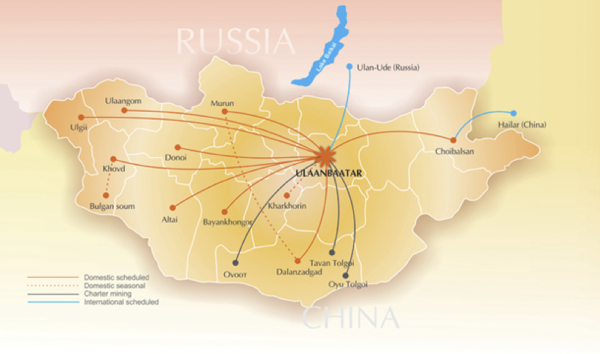 Aero Mongolia was founded 10 years ago in Jun-2001 and conducted its first domestic service on 03-Jun-2003 with two Fokker 50 aircraft. International services were launched in Dec-2003. The carrier now operates a fleet of three 50-seat Fokker 50 aircraft and has over 130 employees. Monnis Group took over the responsibility of the company’s management in Jun-2007. The carrier has a network of two international destinations, namely Hohhot and Irkustk, and six domestic destinations, namely Altai, Hovd Airport, Ulaanbaatar Buyant Uhaa Airport, Ulaangom Airport, Ulgit Airport and Uliastai Airport. 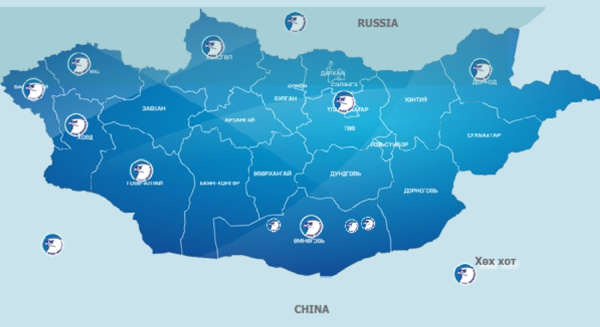 69% of the Ulaanbaatar-based carrier’s capacity (seats) is deployed domestically, with 31% of total seats (500) deployed on international routes. 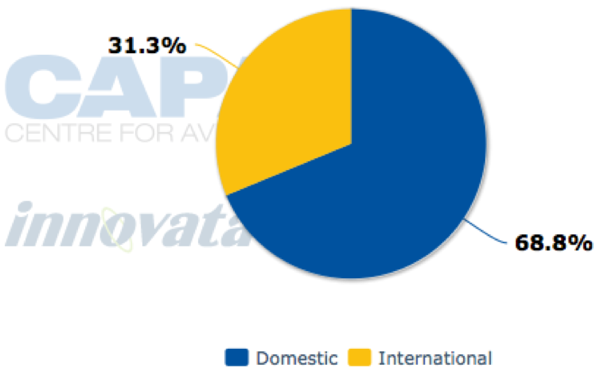 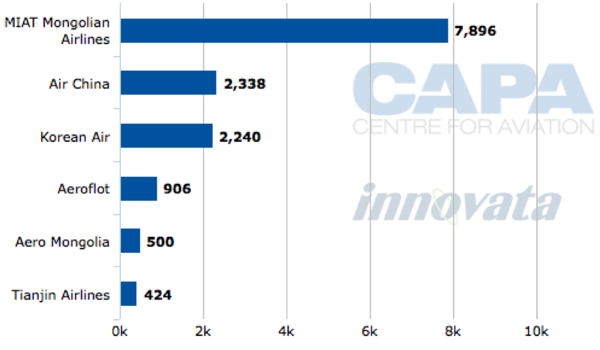 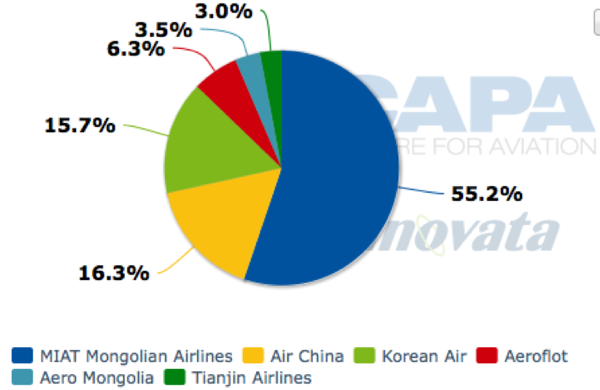 MIAT Mongolian Airlines, established in Jul-1956 with the help of Aeroflot (which is one of the carrier’s two codeshare partnership in addition to Korean Air), is Mongolia’s national carrier and operates an international-only network. The carrier, which was formed in 1956, entered the international arena in 1987, and now operates a network covering six destinations from its Ulaanbaatar base, to Beijing Capital, Hong Kong, Seoul Incheon, Tokyo Narita, Berlin Tegel and Moscow Sheremetyevo. 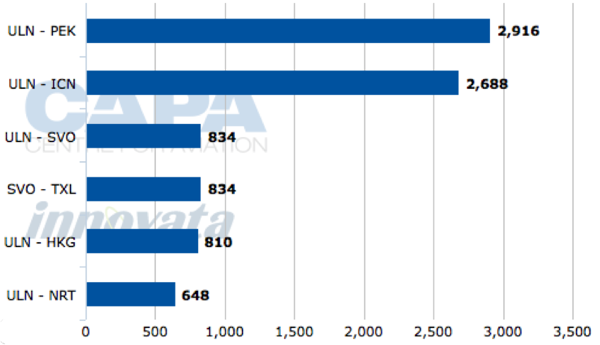 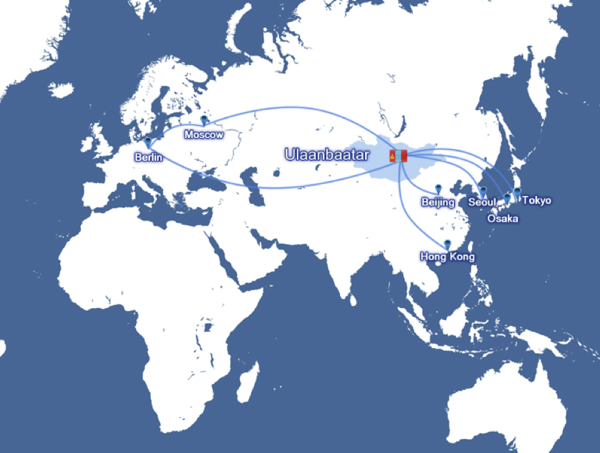 MIAT Airlines in Aug-2011 was awarded a grant from the US Trade and Development Agency (USTDA) to develop a new strategic business plan and restructuring plan. The carrier will use the USD400,000 grant to support its planned fleet expansion and to help ensure "greater air transport infrastructure for Mongolia's continued economic growth". The investment in Mongolian aviation by the USTDA is also designed to "encourage the development of Mongolia's small civil aviation sector and address training and capacity needs to assist MIAT in the successful operation and expansion of the airline". This grant, together with the addition of Mongolian Airlines, will change the nature of the nation's aviation sector. 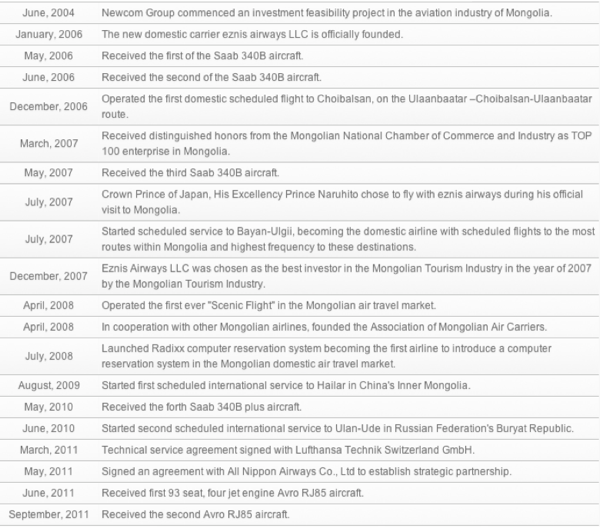