Of all the many delays to new airport openings, that of Berlin Brandenburg Airport is in a league of its own – standing at nine years, if and when the airport does ultimately start receiving and dispatching commercial flights in Oct-2020.

Promises are being made that this deadline is the last one, but some funding still needs to be found. And it will require two different operating models to come together under the same roof. Some disquiet has already arisen over that, with LCCs complaining that they are getting a raw deal.

Questions continue to arise. The nature of the business has changed over the last 20 years since the airport was first envisaged. Has so much effort been put into resolving the fire control/electrical system problems that today's pressing environmental measures had to take a back seat?

What else can happen now?

“What else can go wrong now?” would not be an unnatural reaction to the news that Willy Brandt Berlin Brandenburg Airport (BER) will officially open on 31-Oct-2020 and that the final services from Berlin Tegel Airport will be on 08-Nov-2020.

BER should have opened in Oct-2011; in the circumstances it might be wise to keep Tegel open a little longer, just in case.

The reasons that BER didn’t open in 2011, largely connected to problems with electrical wiring and the fire control system, are well documented. Close behind it is the documentation on the harm the interminable delay did to Germany’s reputation as an engineering centre of excellence, made worse by the damaging furore over what in recent weeks has become a class action by 90,000 people in the UK against Volkswagen, alleging it fitted software to 1.2 million vehicles designed to cheat clean air laws in the UK.

Only 18 months ago Eurowings CEO and Lufthansa Group executive board member Thorsten Dirks predicted that BER would be demolished and rebuilt, a comment that did not go down well in the upper echelons of German society.

Final checks remain to be done and the airport has to be tested by an army of volunteers. There is plenty of scope for more issues to arise, and bookmakers must be considering offering odds on that opening date not being realised. It is quite possible that any further delay to the opening now could well be terminal, shocking though that may seem.

The operator, Flughafen Berlin Brandenburg GmbH (FBB), has already forecast a reduced operating result in FY2020 due to a one-off charge for ORAT (operational readiness activation and transition) procedures for the commissioning of BER.

One issue already arising is that FBB is reported to require close to a further EUR300 million in financing for BER, including more than EUR200 million required for the completion of the main terminal. The operator also requires an additional 200 employees "to operate BER safely".

FBB’s CFO Heike Fölster said the company is in the process of setting up a new business plan with the financing gap in mind.

The previous business plan [Mar-2018] for the years 2018 to 2037 identified additional funding requirements of EUR770 million for the period after the opening of BER in Oct-2020, due to loss of revenue from the unfinished main terminal. It took into account the expectation of an increase in revenues based on the increase in passenger numbers from 2021 and improved revenue opportunities in non-aeronautical activities. The board discussed different options for covering financial needs – including even a hire purchase model at the expense of long term revenue while also committing to raise EUR400 million of necessary funds on the capital market.

And when it opens, BER can expect more pressure from LCCs and charter carriers operating now at the existing Schönefeld Airport next door (which is to be rebranded as Terminal 5 of BER), for lower airport fees.

Those operators are dissatisfied that taxi distances to the existing facility will be several times longer than to the new facility and they are seeking the lower charges in compensation. FBB might do well to look at airline opposition to Kuala Lumpur’s original LCC terminal, which was much too far away from the original airport and prompted the massively expensive KLIA2 to be constructed to replace it.

That will be another problem, because between them low cost and charter airlines currently account for 90.1% of all seats at Schönefeld (a proportion that is likely to change significantly at the new airport). 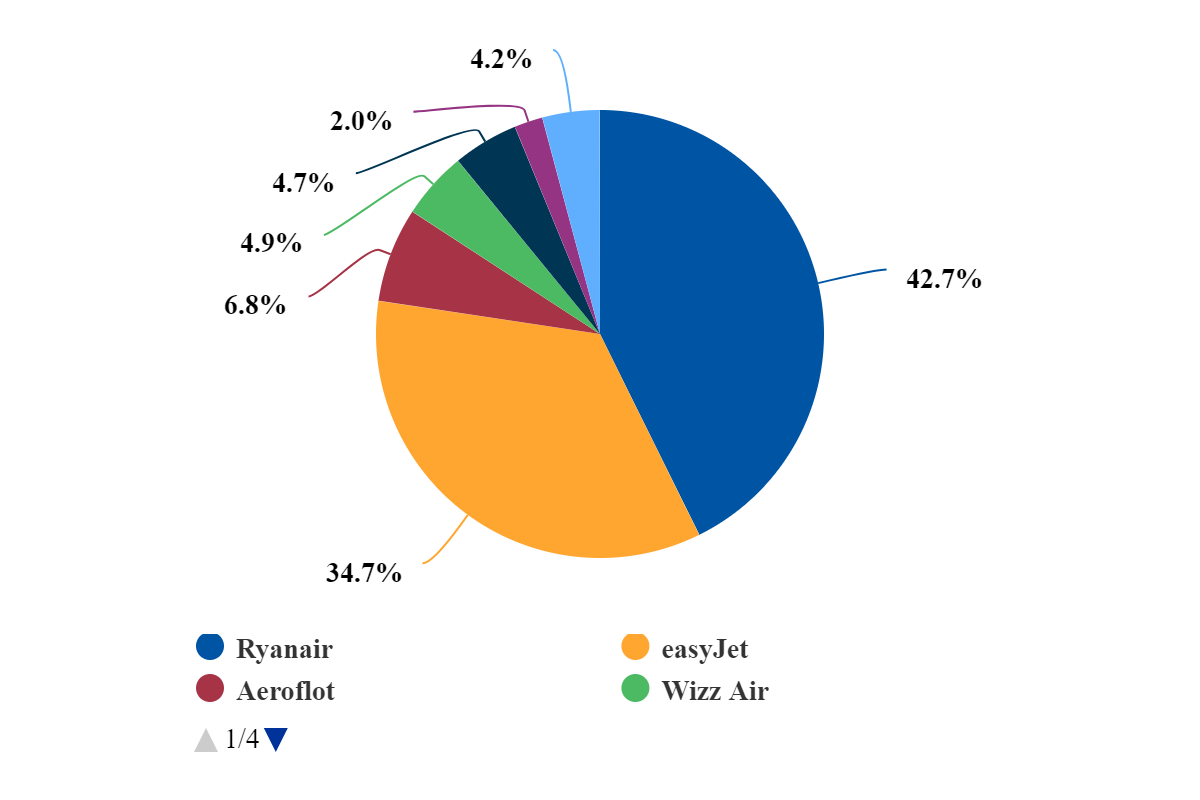 LCCs also account for 50% of seats at Tegel, which is a bigger airport and almost twice the size of Schönefeld, but it still means that 60% of passengers at BER could be travelling on dissatisfied budget airlines.

Equitable levels of charging might be difficult to arrive at

Moreover, the levels of charges to airlines at Tegel are high in comparison with the airport's peers Hamburg, Frankfurt and Munich airports (but not at Schönefeld), as the chart below demonstrates.

Orienting charging levels at BER towards those of Tegel could create strains; prospective levels have not yet been announced. 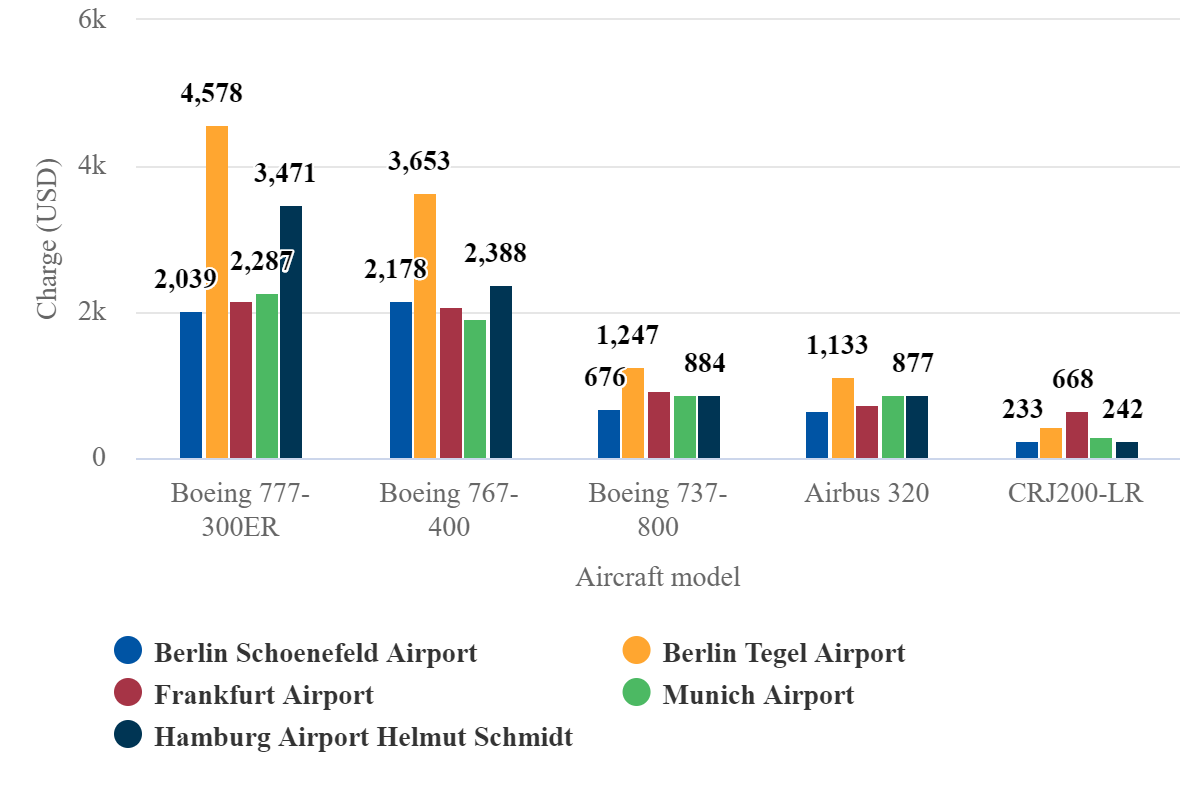 The rail station is ready however

One good piece of news is that rail services to BER will launch on the opening day of the airport. That’s a given; Deutsche Bahn had already completed tracks and platform facilities in time for the originally scheduled date in Oct-2011.

Or is it good news, in fact? Many airlines had already lodged claims over costs incurred when the airport failed to open on time (including Air Berlin, which subsequently failed). Albeit unlikely, the potential remains for Deutsche Bahn to start a new queue for compensation if the revised opening date turns out to be premature.

The commercial challenges BER has faced over the years while it remained a shell came from East German airports such as Dresden and Leipzig, and even from Warsaw. But overall passenger traffic continued to increase despite the age of the two current airports.

That is, until 2017 when roles were reversed. Schönefeld stopped growing while Tegel started. 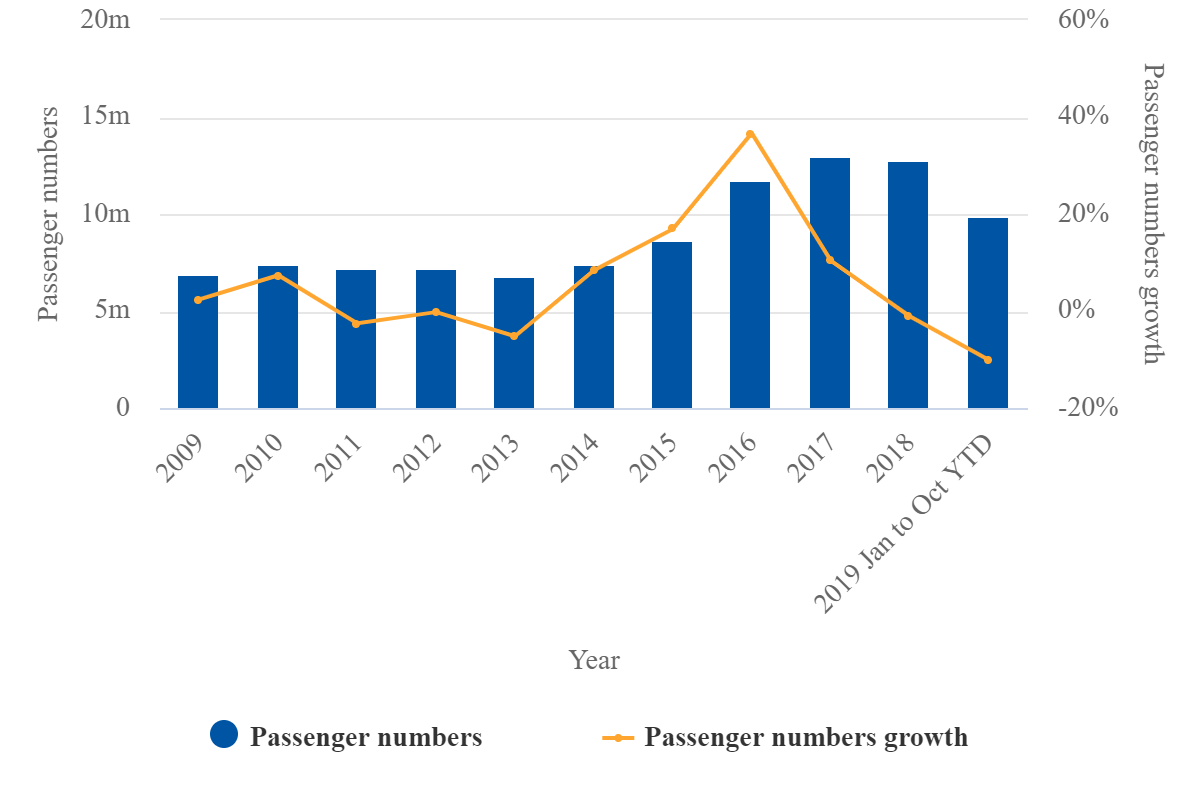 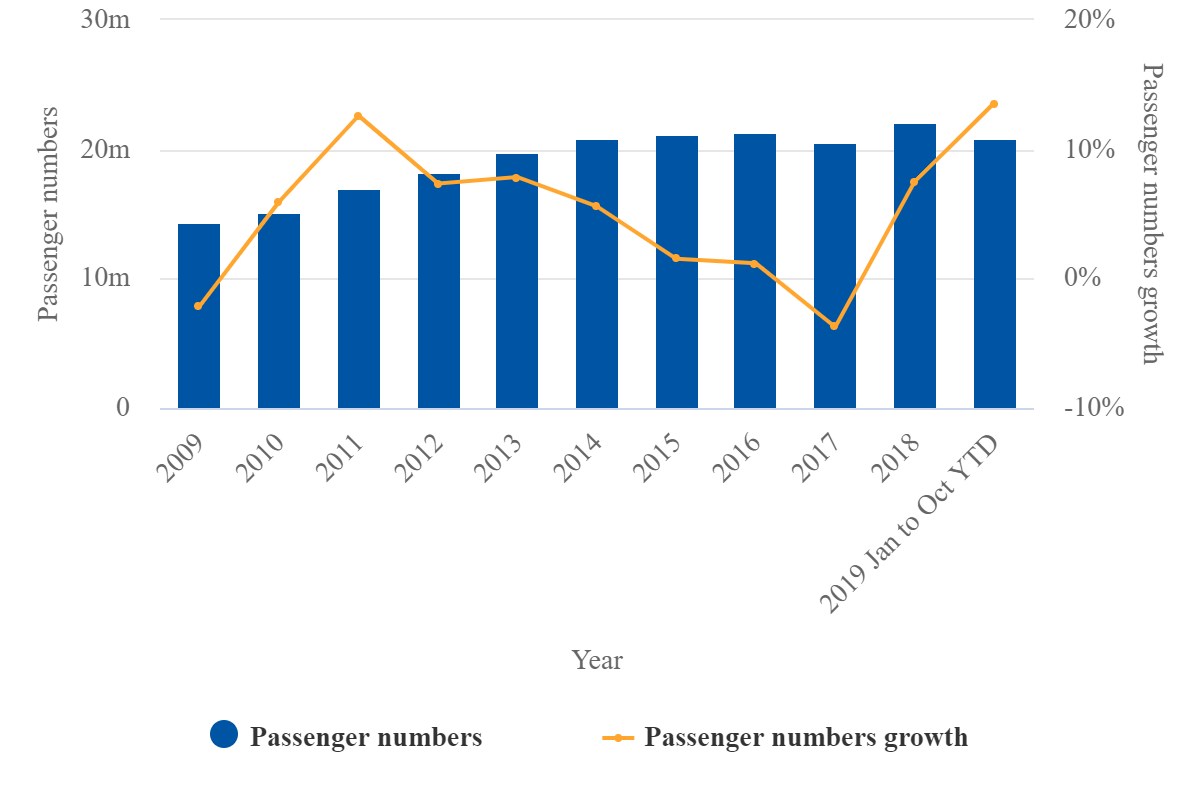 Schönefeld has been influenced by high tax rates applied to aviation impacting leisure travellers, while Tegel's result was achieved despite the 2017 collapse of Air Berlin and is testament to the increase in airlines that have filled that gap, notably easyJet and Eurowings.

Berlin has become a European aviation hub in every sense, having been an also-ran at the turn of the century. Assuming BER does open in 2020, this recent growth should offer a vital springboard to re-establishing Berlin as an economic hub, complete with the long haul connectivity that befits a city of its stature.

One new issue that may yet raise its head as the opening date approaches is the tidal wave of opposition to flying on environmental grounds. There was no environmental emissions lobby to speak of when BER was first planned, in 1991.

It would be ironic if BER now faced the wrath of climate protesters – and they will undoubtedly be there in force when it opens – because the need for environmental controls could not have been envisaged when the airport itself was first conceived. And it has hardly been top of the list of things to worry about in the last eight years. It is now.

Chancellor Merkel, who was raised in a town to the north of East Berlin, will step down in 2021, possibly sooner. She has been Chancellor throughout the period of BER's struggles and a successful opening would be a welcome part of her legacy.

The pressure for the 31-Oct-2020 opening date to be honoured is immense.