Belarus aims to privatise Belavia in 2013, with Russian carriers the most likely suitors

Belarus and its aviation industry have come under the spotlight in recent months, not least for its air services dispute with Russia which led to the temporary suspension of all Minsk-Moscow services in late Mar-2012. Discussions regarding the privatisation of national carrier Belavia have also been occurring, with the privatisation likely in 2013 according to Belarus’ Transport Minister. Aeroflot is rumoured to be interested in purchasing the carrier, although other Russian companies are also reported to be interested.

In Apr-2012 the subject of Belavia’s potential privatisation emerged after the Belarusian Government revealed plans to convert state-owned transportation enterprises into open joint stock companies by 2015. Belarusian Transportation Minister Ivan Shcherbo confirmed Belavia was included in these plans with privatisation most likely to occur in 2013.

Mr Shcherbo said ahead of the privatisation the Government will look to strengthen and grow Belavia’s presence in the Eastern market in an effort to make it more attractive to potential investors. As part of these plans Belavia recently announced it will lease two Embraer E175 aircraft from Air Lease Corporation, the first of which is expected to arrive in Sep-2012.

The fleet expansion will allow the flag carrier to both expand its network and to increase capacity on existing routes. The aircraft will be in addition to Belavia’s existing fleet of 17 aircraft, which include 10 Boeing 737-300/400s, four Bombardier CRJ100/200s and three Tupolev Tu-154 aircraft.

The carriers operate short- and medium-haul services, mainly across Eastern and Western Europe. Its network also includes some services to the Middle East and Central Asia. 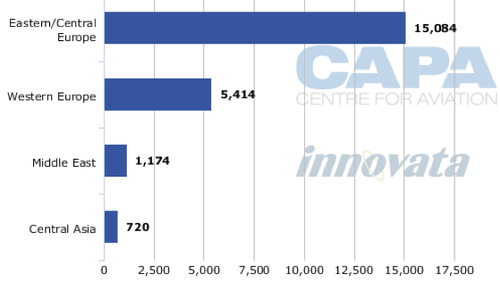 Summer 2012 will see Belavia increase capacity on existing routes, including Minsk-Batumi service which will see frequency increase from three times weekly to daily from 10-Jun-2012 to 06-Sep-2012. The CRJ200s normally used on the route will be replaced with larger 737-500s. New routes to Russia will also come in summer 2012 with Minsk-Sochi service to launch on 16-May-2012 followed by Minsk-Novosibirsk service on 03-Jun-2012. 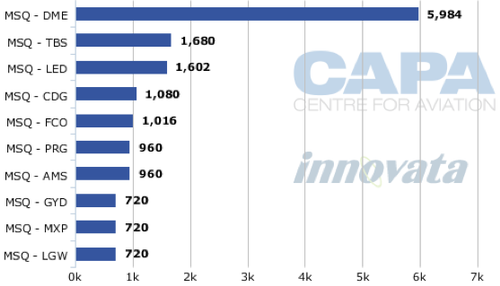 Only Russian companies have been reported to be interested in taking a stake in the carrier, with Aeroflot rumoured to be among those interested. The Russian interest is not surprising when looking at where key traffic volumes are from Belarus.

From Belarus’ key airport, Minsk, Moscow Domodedovo leads with 7776 seats per week, followed by Moscow Sheremetyevo on 4060 seats per week. Saint Petersburg Pulkovo also appears on the top 10 list with 1602 seats per week from Minsk.

Belarus does not have domestic air transportation networks, making it more difficult for Belavia as the carrier has to rely upon international routes where it has to compete with primarily larger foreign carriers. Belavia currently has about a 61% share of capacity in Minsk, with the closest competitor being Aeroflot, which has about a 10% market share.

The potential purchase of Belavia by Aeroflot or another Russian carrier follows a very recent dispute between Belavia and Russia over their bilateral air services agreement. In late Mar-2012 Russian carriers requested the existing frequency allocation of four times daily Minsk-Moscow service be increased. This led to a dispute which culminated in all services between the countries being temporarily suspended on 26-Mar-2012. Russia temporarily suspended Belavia’s licence to operate Minsk-Moscow Domodedovo service while Belarusian authorities revoked Russian airline licences to operate to Minsk.

Transportation officials from both countries met on 29-Mar-2012 to discuss the issue and agreed to allow services to operate between the countries until 10-May-2012. During this extension negotiations for amendments to the Russia-Belarus bilateral air services agreement were to be conducted, with a finalised agreement to be signed on 10-May-2012. The agreement is reportedly to enable each country to operate five daily Moscow-Minsk frequencies.

Belavia is the only Belarusian carrier which operates to Russia so has the full Belarusian entitlement. On the Russian side, Aeroflot currently operates three times daily from Moscow to Minsk while UTair and S7 Airlines now each operate daily service.

The importance of the Minsk-Moscow route for Belavia is the reason more liberalised aviation policy is such a threat to them. Aside from Moscow Domodedovo, Belavia also operates to Saint Petersburg, Yekaterinburg and Kaliningrad. Sochi and Novosibirsk will also be added to its Russian network in summer 2012.

Despite being a small carrier, Belavia is likely to be attractive to Russian carriers looking to increase their share of the Russia-Belarusian market. Belavia currently has a 56% share of capacity in the Belarus-Russia market, while Aeroflot has a 25% share, according to Innovata data. Currently almost one third of Belavia’s total capacity is allocated to Minsk-Moscow Domodedovo and Minsk-Saint Petersburg alone.