The world’s busiest airport by total passenger movements, Atlanta Hartsfield-Jackson International Airport, continues to hold off Beijing, the world’s second busiest airport, but it is only a matter of time before Atlanta is dethroned. Only a decade ago, Beijing Capital did not even rate among the world’s top 30 airports, a list that Atlanta has headed since 1998. Beijing only appeared as one of the world’s 30 largest airports in 2004, in 20th position, with passenger growth of over 43% in this year. This week Tokyo Haneda surpassed London Heathrow as the world's third largest airport. 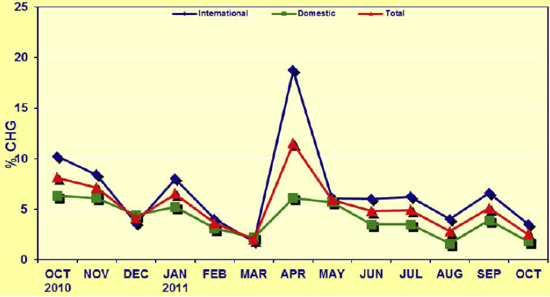 Atlanta saw a 5.3% decline in schedule frequency and 2.8% decline in seat capacity in Dec-2011, according to OAG FACTS data. Beijing, meanwhile, reported a 3.1% increase in frequency and 4.5% seat capacity growth in the month. At present, Atlanta has around 94,000 more weekly seats, or 410,000 monthly seats (Dec-2011) than its Chinese counterpart (equating to a 5% difference in seats), despite Beijing Capital reporting stronger year-on-year growth rates in recent months. Atlanta is also operating around 62% more frequencies in Dec-2011 than Beijing. 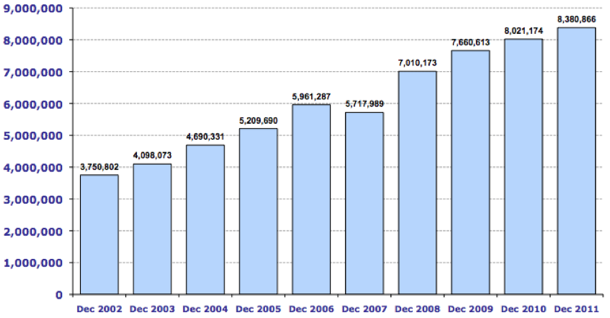 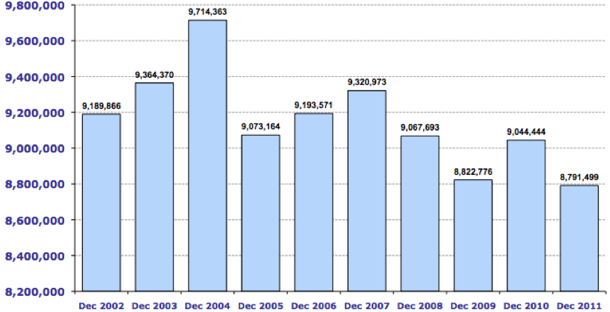 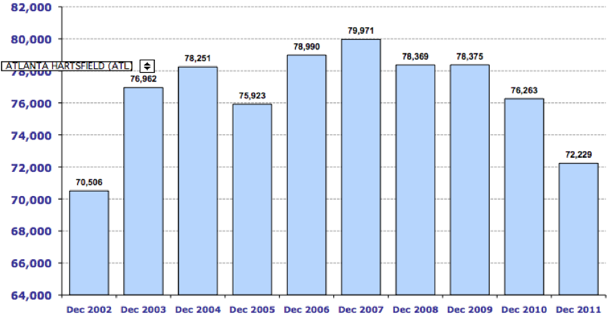 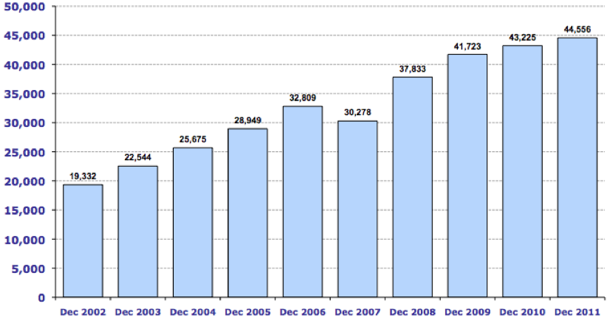 While an examination of capacity and frequency trends over the past decade highlight a stable upwards trend for Beijing and a weakening trend for Atlanta, Atlanta will still end the year as the world’s largest airport, for the 14th consecutive year. 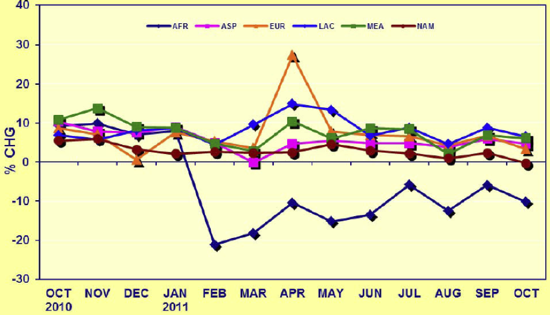 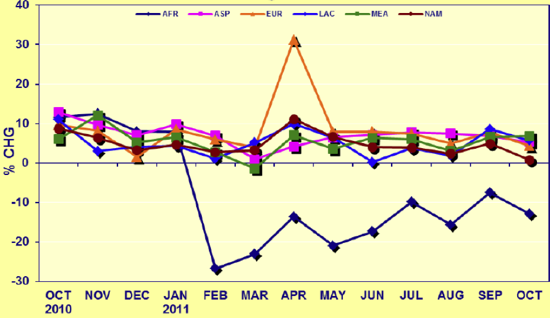 ACI noted that in the Middle East, Abu Dhabi continued to be among the high growth airports in the region at 17.2%. Abu Dhabi Airports Company (ADAC), in late Nov-2011, stated it expects traffic to exceed 12 million passengers in 2011, with a year-on-year increase of 11% from 2010 levels. ADAC is forecasting double-digit growth for the next few years. Passenger traffic for the first nine months of the year rose 9% year-on-year, to 9 million. 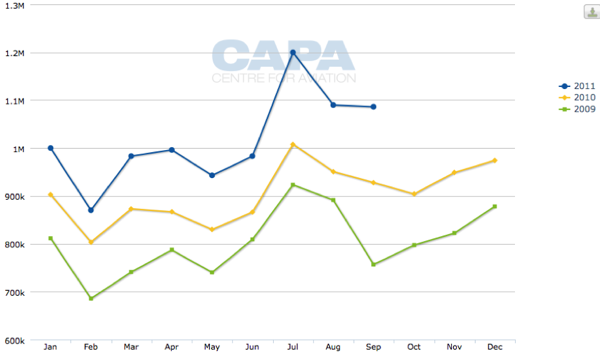 While international traffic remains strong for many airports in Latin America and the Caribbean, domestic markets in Brazil and Mexico are continued sources of growth for the region. Airports such as Belo Horizonte, Rio de Janeiro and Mexico City experienced gains of +29.2%, +20.1% and +19.6%, respectively, ACI said. 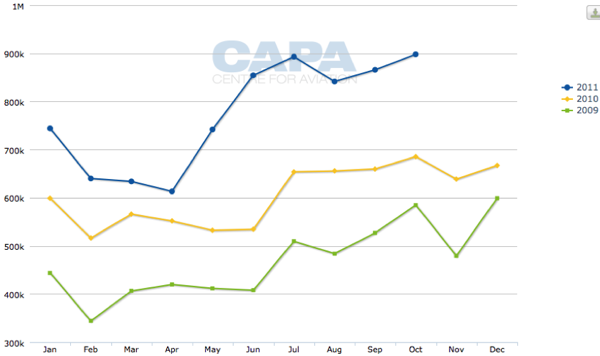 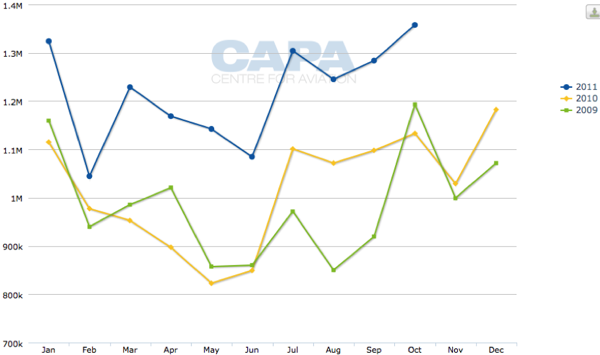 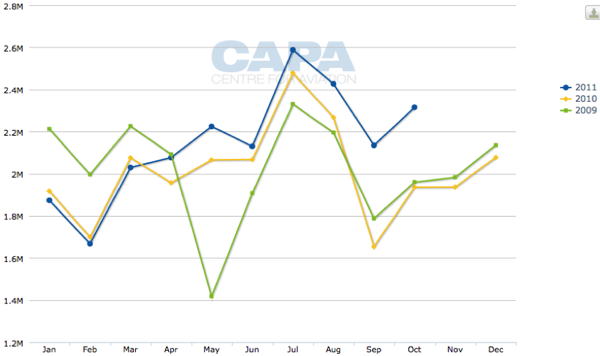 In the Asia Pacific region, New Delhi, the largest airport in India, and Jakarta, the largest Indonesian airport, have witnessed strong growth rates, of 33.3% and 17.9%, respectively, in domestic traffic. During Nov-2011 and based on OAG FACTS data, Southeast Asia key hubs commanded four of the top 10 rankings by incremental numbers of seats, represented by Jakarta, Manila, Singapore Changi and Kuala Lumpur. Including Delhi and Hong Kong, the incremental 2.995 million seats in these six airports is a strong testimonial that the Asia Pacific is the main driver of aviation growth, OAG noted.

Significant downturn in Europe but with some strong growth

The overall passenger traffic at European airports increased by 3.4% in Oct-2011, half the growth rate seen in Sep-2011. Overall aircraft movements increased 1.3%, lowered by the continued entrenchment of negative freight growth (-4.9% in Oct-2011).

*Examples of airports that experienced the highest increase in passenger traffic per group
Source: ACI Europe

Based on Nov-2011 capacity data, OAG FACTS noted that Tirana recorded the highest growth rate of 65%, followed by Tallinn (37%) in Europe (Mexico City was in between these two European airports with growth of 38%). Based on absolute numbers, Istanbul sustained its aggressive growth with an additional 917,315 seats. In terms of schedule frequency, Tirana Airport achieved the highest growth rate of 57% year-on-year (followed by Montevideo (50%) and Islamabad (45%)).

North America saw generally flat growth in international (+0.8%) and domestic (-0.2%) passenger traffic, although higher growth will likely be experienced during the Nov-2011 and Dec-2011 holiday season. However, traffic over this peak period is expected to be weaker than in previous years, according to the Air Transport Association of America (ATA).

ATA forecasts around 23.2 million passengers will fly on US carriers' domestic and international routes during a 12-day period surrounding Thanksgiving (18-Nov-2011 to 29-Nov-2011), a 2% year-on-year reduction and equating to around 37,000 fewer people per day compared with last year, as US carriers have reduced capacity to match demand and offset higher costs. The 2011 expectations anticipate that total volumes for the period will be 12% less than the peak volumes reached in the same period in 2006.

With continued social and political unrest in North Africa, the region is experiencing a temporary shift in passenger traffic away from the region as a travel destination. Major Egyptian and Tunisian airports have witnessed double-digit declines, according to ACI. Cairo saw a decline of 25.9% while Tunis experienced a decline of 12.3%. However, some traffic appears to have been diverted to Enfidham, which has seen traffic rise by 205.7%, ACI noted.

ACI, meanwhile, continues to voice its concerns about the health of the global air freight market, echoing comments made by IATA and an increasing number of airlines, that the industry is “likely to observe year over year declines in freight traffic over the months to come”.  With air freight “on the sidelines”, passenger growth in Oct-2011 remained in resilient and positive territory despite the challenges in global markets.

Mr Echevarne commented: “Traffic in air freight, as a leading indicator, is much more sensitive to pending risks in the business cycle. International trade in air freight has been placed on the back burner until business confidence is revived, particularly with respect to the economies of Europe, Asia and North America. With the remaining fears of a possible Euro break-up, we are likely to observe year over year declines in freight traffic over the months to come.”

Air freight has now seen its sixth consecutive month of year over year decline up until Oct-2011, with a 3.9% weakening in freight volumes in the month. International and domestic markets have seen year-on-year reductions of 3.8% and 4.0%, respectively. 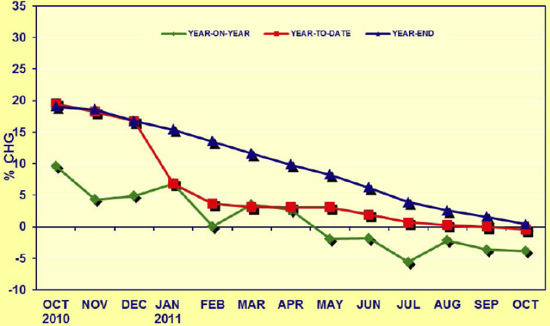 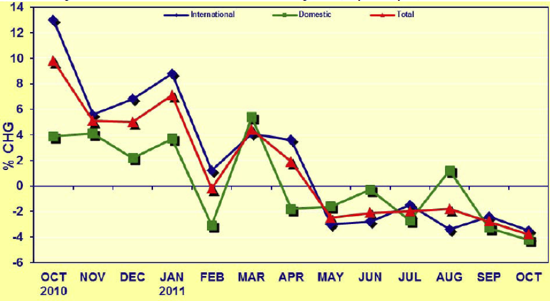 Global exporters in Asia experienced sharp declines in total freight with Hong Kong (-8.2%), Shanghai (-9.8%) and Incheon (-8%) all witnessing freight contractions, according to ACI. The major North American freight airports all experienced declines in their year over year volume. Memphis saw a decline of 1.5% while both Anchorage and Louisville declined by over 5%. There was a similar situation in Europe, with a 4.4% year-on-year decline in freight. Among the major airports in the region, declines were observed in Frankfurt (-9.5%), Amsterdam (-3.8%) and London Heathrow (-7.2%). 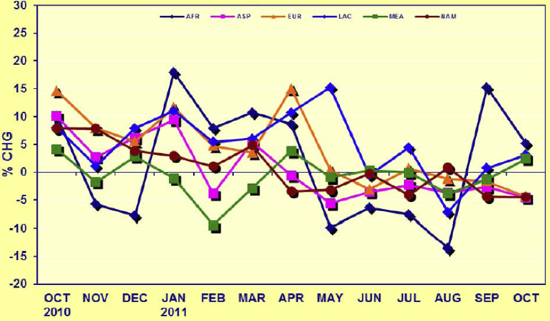 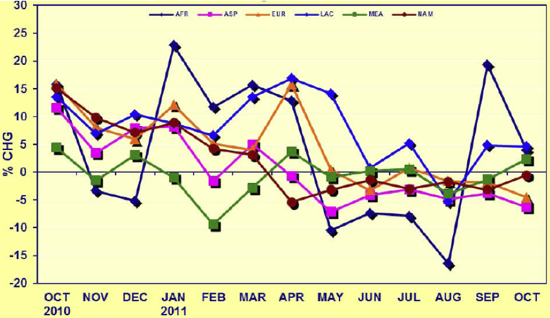 Despite the overall slowdown in global air freight, certain trading blocks in Africa, Latin America and the Middle East are less affected by the risks associated with sovereign debt in developed economies. Contrary to Africa’s decline in air passenger travel, air freight has posted the greatest gains compared to all other regions, although much of the region’s growth can be attributed to Johannesburg, with a growth rate of 8% in the month. International freight in key Brazilian airports observed notable double-digit gains. São Paulo Guarulhos and Campinas saw gains 13.7% and 10.7%, respectively. The Middle East saw modest gains with overall growth reaching 2.3%. 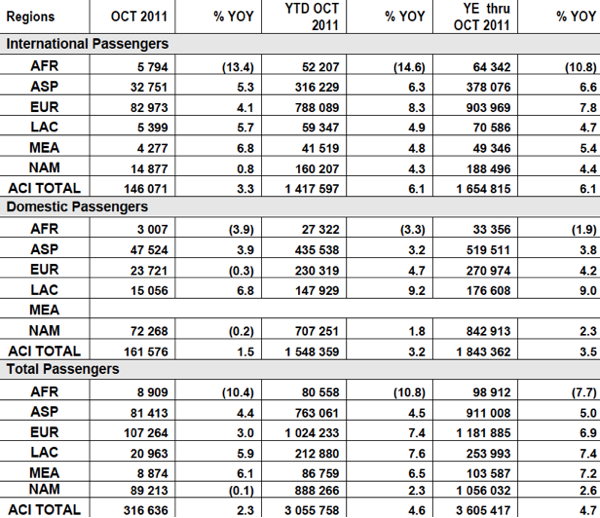 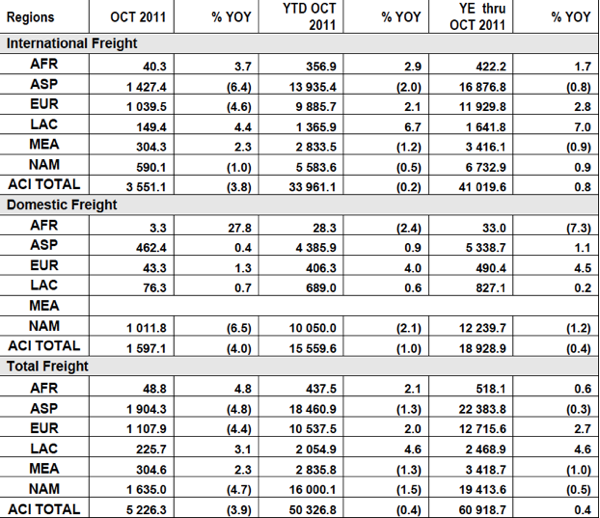