Beijing Capital International Airport is in talks to issue new shares through a subscription. No further information was disclosed. On the same day the airport’s shares rose by 14%.

The airport’s board of directors noted the increases in the trading price and volume of the shares of the company on Friday (22-Oct-2010) and stated it is not aware of any reasons for such movements.

Autogrill SpA shares advanced 1% to EUR9.4, extending gains of 2.8%. Equita Sim SpA reiterated a “buy” rating on Autogrill, highlighting in a note “the improvement in traffic”, according to Reuters.

Meanwhile, shares in Ferrovial rose by 2.7%, outperforming a weak STOXX Europe 600 construction and materials index SXOP, after the company announced it has started a process for a possible sale of a minority stake in BAA Limited (BAA). Initially, the proposed transaction is to divest 10% of the equity in FGP Topco, parent company of BAA. Ferrovial holds, indirectly, 55.87% of BAA, the rest of the equity being held by Britannia Airport Partners LP (26.48%) and GIC (17.65%).

Ferrovial intends to use the proceeds of the transaction on other new infrastructure and services projects and to pay down corporate debt, as has been the case with proceeds from recent disposals. The company reportedly plans to settle a deal for the stake in 2011. Ferrovial’s net debt expanded to EUR24.5 billion as of Jun-2010, an increase of EUR2.2 billion since Dec-2009. EUR15 billion of this amount has been from BAA. 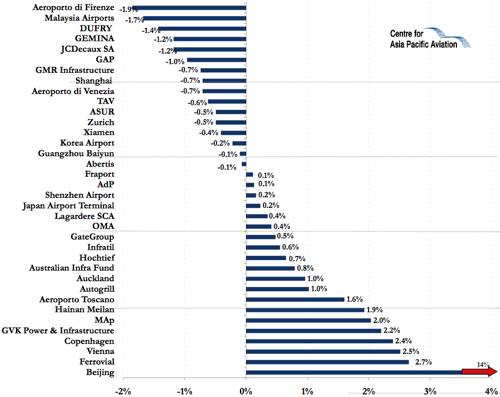