Full year lease revenue was slightly down (-2.3%), although B&B Air reported an annual lease utilisation factor of 98%. The leasing company gained USD82.3 million from the purchase of USD169.4 million principal amount of its notes payable for 49% of the principal amount and another USD8.3 million from lease termination settlements.

Expenses were up in the year, particularly a USD6 million charge related to debt purchase option amortization and an additional USD9.6 million in depreciation, primarily due to a full year of depreciation on aircraft purchased during 2008.

Full-year EBIT was USD113 million, more than double the USD55 million reported in 2008.

Conditions to improve in 2010

B&B Air expects airline and financial market conditions to improve in 2010 and it will continue to evaluate aircraft acquisition opportunities. The company had 62 aircraft on its books as of 31-Dec-2009, the same amount as at the end of 2008, contracted to 36 lessees.

Total assets are just over USD2.0 billion, including USD235 million in cash. The company invested USD9 million in share repurchases in 2009, representing approximately 7% of shares outstanding.

Meanwhile, Boeing shares gained 1.7% yesterday, after a number of upgrades. UBS upgraded the company from ‘Sell’ to ‘Neutral’ and raised its price target for the company to USD68, citing less overcapacity and strong traffic. CK Cooper initiated coverage on Boeing with a ‘Buy’ rating and a price target of USD76 per share.

Groupe Aeroplan shares dropped 9.1%, after than company reported a lower-than-expected 4Q2009 profit of CAD20.5 million, less than a quarter of its net profit in the previous corresponding period in 2008. The company admitted to a “disappointing” quarter, although revenue was down just 1.3% to CAD425 million.

The company reported net revenue of CAD1,436.8 million for the full year, and a net profit of CAD89.3 million.

For 2010, the company is forecasting “modest organic growth”, although free cash flow levels are expected to be cut and the "inclusion of several one-off transaction costs" is also expected to eat into the company’s full year results for 2010. 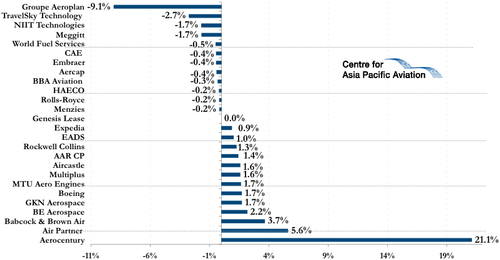