Azerbaijan Airlines (AZAL) has embarked on a major expansion of its network with the launch of seven seasonal routes and three year-round routes. All the new routes will be launched by the beginning of Jul-2012 and primarily across Eastern Europe. The expansion comes as the flag carrier aims to bolster inbound leisure traffic following an effort by Azerbaijan to build up its tourism sector through the use of tourism campaigns and hosting Eurovision 2012.

As with other carriers from Central Asia and the CIS, Azerbaijan Airlines’ peak period is upon it with the summer 2012 schedule gearing up. The airline’s operations in 2012 will peak at just under 42,000 seats per week between Jul-2012 and Sep-2012 before dropping to just under 31,000 seats from the start of the winter season in late Oct-2012. Almost 75% of the carrier’s capacity is now allocated to Eastern and Central Europe routes with the Middle East, Western Europe and Asia collectively accounting for about 26% of capacity. 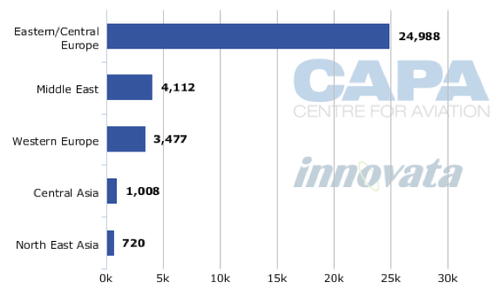 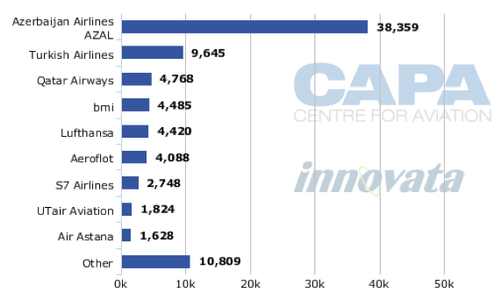 Azerbaijan Airlines’ summer 2012 schedule will see the launch of 10 new services as well as increased frequency on its existing network including services to Paris Charles de Gaulle, Prague, Milan Malpensa, Istanbul Ataturk, Anakara and Dubai. Six of the new routes have already been launched, two more will begin this month and the final two will be launched at the beginning of next month.

Three of the routes already launched are year-round additions to Azerbaijan Airlines’ network (Rome, Lankaran and Zagatala) while the other seven will only be operated for the peak summer season. Three of the new destinations are domestic: Lankaran, Zagatala and Gabala.

According to Innovata, on the 10 new routes, Azerbaijan Airlines will only face competition on Baku-Novosibirsk Tolmachevo. S7 Airlines currently operates between Novosibirsk and Baku twice weekly using A320s.

As seen by the Eastern focus of the summer 2012 expansion, Azerbaijan Airlines’ network emphasis is on Eastern Europe. This is seen again when viewing its top 10 international routes, with seven of the routes to Eastern European destinations. The airline’s two top routes, services to Moscow Domodedovo and Istanbul Ataturk, offer three times as much capacity per week than the third largest route to Dubai. 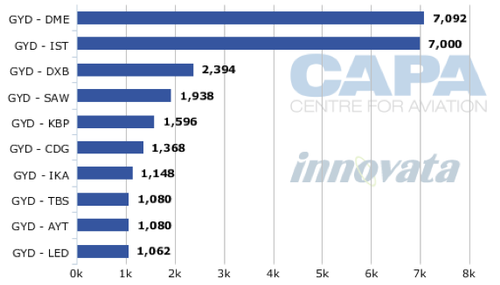 Azerbaijan Airlines operates to both Istanbul Ataturk and Istanbul Sabiha Gokcen airports, its second and fourth largest routes, respectively. The airline recently signed a codeshare agreement with Turkish LCC Pegasus Airlines, which is based at Sabiha Gocken. The agreement also involved reciprocal mileage accumulation benefits for passengers travelling on either of the airline’s services.

Pegasus does not operate into Azerbaijan, which has very low LCC penetration with only about 2% of the country’s current capacity contributed by LCCs. Like most other Central Asian countries, Pegasus is unable to launch services to Azerbaijan due to bilateral restrictions. But Pegasus is willing to forge partnerships with local carriers such as Azerbaijan Airlines to access new markets.

The Azerbaijan Airlines-Pegasus partnership will benefit both carriers in both the local Baku-Istanbul market as well as in the greater Baku-Europe market as Pegasus has a large European network and offers a connection product at Sabiha Gocken. As a result, the partnership will allow both carriers to compete more effectively against Turkish Airlines.

As the largest foreign carrier in Azerbaijan, Turkish Airlines is now well positioned to carry a large share of traffic between Azerbaijan and Europe, particularly markets which are not served non-stop by any carrier.

The Government of Azerbaijan has set the development of the nation’s tourism industry as a key priority, with Azerbaijan Airlines a very important component in this strategy. The nation is seeking to make tourism one of the major, or the largest single contributor, to the country’s economy.

Azerbaijan joined the UN World Tourism Organization (UNWTO)/World Travel & Tourism Council (WTTC) Global Leaders for Tourism Campaign in late Nov-2011, signifying tourism’s growing importance to the nation. Azerbaijan expects travel and tourism’s contribution to the country’s GDP to rise by 9.5% annually in the next 10 years with travel and tourism-related employment to increase 5% annually in the next 10 years, rising to 375,000 jobs by 2021. In 2010 the country received 1.5 million foreign tourists, which has grown from 900,000 in 2006.

Increased tourism to the nation will see Azerbaijan Airlines expand its network and grow its operation. The airline may increase its Western European network, which it has largely untapped. It could also look to expand its Asian network to tap into the rapid growth in Asian outbound leisure markets such as China. The carrier’s easternmost destination is currently Urumqi in western China. Urumqi is the only destination from Northeast Asia and Azerbaijan Airlines does not currently have any service to South Asia or Southeast Asia.

The growth of Azerbaijan as a tourism destination could also bring increased LCC penetration to the country, which could threaten Azerbaijan Airlines through undercutting the flag carrier’s relatively high cost operation. The country is now under-served by LCCs but this could change if Azerbaijan adopts a more liberal air services regime as part of its bid to increase tourism. While expansion of Azerbaijan Airlines is needed for the country to realise its potential as a tourism destination, LCC expansion would potentially have an even bigger impact given the lower fares and stimulation of demand that typically comes with new LCC routes.

The airline’s first 767 is currently being used on twice daily Baku-Istanbul Ataturk service. The 767 has allowed Azerbaijan Airlines to increase capacity to Istanbul, one of its largest and most competitive route, which in turn has freed up some of its narrowbody aircraft to launch new destinations such as Rome and increase capacity to existing destinations.

Azerbaijan Airlines’ other two aircraft orders are for the 787-8, which it expects to receive in 2014. The carrier aims to use its 787s to launch services to the US. Azerbaijan is yet to be assessed by the US Federal Aviation Administration (FAA) for compliance with ICAO safety standards. Azerbaijan Airlines’ planned US service will require a Category 1 safety rating from the FAA, a rating other countries in the Central Asia region have struggled to secure.

While operating a varied fleet, it has opened up a new revenue source for the carrier: training. In late 2011, Boeing and Azerbaijan Airlines entered into a flight training partnership which added AZAL Aviation Training Centre to Boeing’s global network of training campuses. The airline operates new full-flight simulators for the 757, 767, A320, and ATR turboprops. Offering the training facility to other airlines in the region is allowing the airline to lower its operating costs and recoup some of its investment made into training infrastructure.

With the nation’s increased tourism focus, Azerbaijan Airlines is taking steps to improve the passenger experience with the introduction of mobile and web check-in, in-flight mobile connectivity and the opening of a business class lounge at its hub.

In Feb-2012 the carrier commenced the installation of mobile and internet connectivity on board its aircraft after signing an agreement with Azerfon and OnAir in Nov-2011. This was followed with the launch of mobile and web-check in for passengers in May-2012 with the adoption of SITA’s Horizon PassengerMobile solution. The airline will also be introducing self check-in kiosks at Baku Heydar Aliyev International Airport and Moscow Domodedovo Airport later in 2012.

Azerbaijan’s visibility as a tourist destination is increasing throughout Europe, particularly assisted by the nation’s current tourism campaigns and its hosting of Eurovision 2012 – an event considered to bring considerable tourism benefits to the host nation. Azerbaijan Airlines has become a key part of the country’s tourism strategy and further expansion of the carrier’s network is likely to follow.