Shares in Italy’s Autogrill regained 1.3% on Friday, following the release of the company’s financial report for 2009, which sent its shares 2.8% lower on Thursday. CEO, Gianmario Tondato Da Ruos, forecasts two scenarios for the company in FY2010: “blustery” and “breeze”, which have been “upgraded or downgraded, depending on your level of optimism” from its earlier projections of “hurricane” and “storm”, respectively.

According to Mr Da Rous, in The Moodie Report (05-Mar-2010), “blustery reflects [Autogrill’s projections of] EUR5.9 billion in sales and EBITDA of EUR615 million; “breeze” reflects sales of EUR6 billion and EUR635 million in EBITDA. But I am also hoping for another scenario – “blue skies” - and there is a possibility that things might get even better”.

Turkey’s TAV Airports reportedly confirmed the sale of an 18% stake in its Tunisian subsidiary, TAV Tunisie SA, to Pan African Infrastructure Development Fund (PAIDF) for EUR39.7 million. The sale reduced TAV’s stake in the JV to 67%. Funds raised from the sale will be used to strengthen the company’s financial structure. Shares in TAV Airports were up 1.8% on Friday. 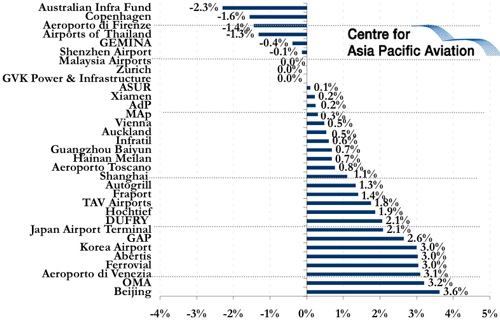