Gold Coast traffic was up 8% to 6.3 million passengers in the year ending 30-Jun-2016, with international traffic up 18% to 1.05 million. Gold Coast had the fastest international growth in FY2016 among Australia’s six main international airports.

Gold Coast reported an 18% increase in international passenger movements to 1.05 million, and 5.6% domestic growth to 5.26 million, in the process overtaking Adelaide as sixth largest. Both growth figures were higher than those of any of Australia’s other top six airports.

Following the capacity truce between the two major airline groups, average domestic growth in Australia in FY2016 was a more modest 2%, based on BITRE figures. Of Australia’s 10 largest domestic airports only Hobart in Tasmania had slightly faster growth in FY2016 than Gold Coast. BITRE figures only include revenue scheduled passenger traffic, while airport figures typically also include non-revenue traffic and charters.

Gold Coast has 10 international and nine domestic routes (based on OAG data for week commencing 26-Sep-2016).

All three of Gold Coast’s other New Zealand routes – Christchurch, Queenstown and Wellington – also recorded year-over-year increases in Jun-2016. Hong Kong and Wuhan, launched over the last year, have also contributed to the recent surge in international passenger traffic. 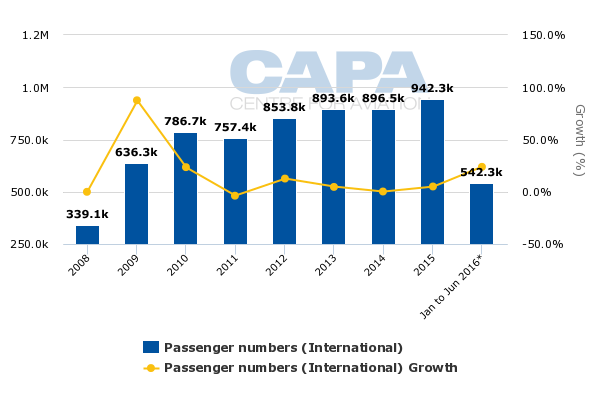 As CAPA has previously highlighted, the additional capacity for the Gold Coast is part of an overall focus on resuming expansion in Australia. AirAsia X, particularly, is bullish about increasing its share of the Gold Coast-China market, which it now serves with a one-stop product via Kuala Lumpur.

One year ago AirAsia X operated only five weekly flights to Gold Coast. It restored daily services at the end of Nov-2016 and now has 18 year-round weekly flights from Gold Coast (including 11 to Kuala Lumpur and seven to Auckland).

AirAsia X’s weekly seat capacity at Gold Coast Airport has increased a remarkable 260% over the past year. 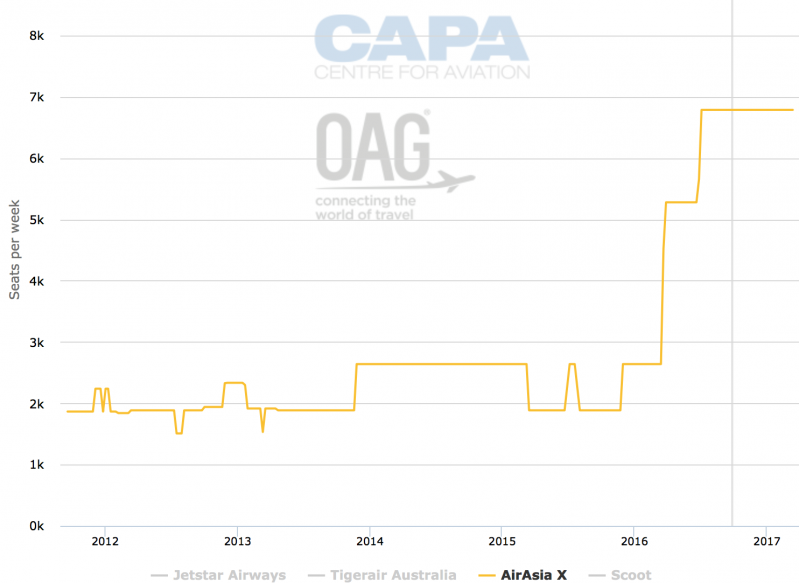 In Sep-2016 Hong Kong Airlines unveiled plans for a further increase in capacity to the Gold Coast, with five weekly year-round flights from Dec-2016 and a daily service during the Chinese New Year period in early 2017. At least for now, Hong Kong Airlines will continue to tag Gold Coast with Cairns on a circular routing.

The additional capacity from Hong Kong Airlines is significant as it enables Gold Coast to continue growing traffic from China, which is the fastest growing source market for the region’s tourism sector. Hong Kong Airlines relies heavily on connections to mainland China, although most of its Australia traffic consists of individual consumers rather than group bookings.

Jetstar suspension of Wuhan should have relatively small impact

Over the past year Gold Coast has benefitted from its first regular nonstop connection with mainland China. Jetstar has operated a twice weekly scheduled charter service from Gold Coast to Wuhan since Oct-2015, backed by a Chinese agent. The Wuhan service has generated approximately 4,000 passengers per month, contributing to Gold Coast’s recent rapid rate of growth.

However, Jetstar operated its last Gold Coast-Wuhan flight on 27-Sep-2016. Gold Coast should be able to attract another China route in the near future, and potentially establish a more permanent scheduled service.

Jetstar continues to operate six international routes from Gold Coast – Auckland, Christchurch, Nadi, Queenstown, Tokyo and Wellington. However only Auckland is daily, and only Tokyo is served with widebody aircraft.

Jetstar is no longer the international market leader at Gold Coast. AirAsia X now has that distinction, accounting for approximately 40% of international seat capacity compared with 31% for Jetstar. 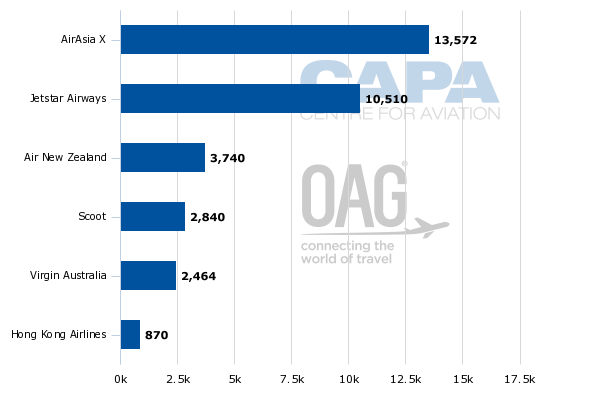 AirAsia X has been evaluating further capacity increases at the Gold Coast, including the addition of a second New Zealand route.

Gold Coast was AirAsia X’s very first route when it commenced operations in late 2007. AirAsia X has established a strong brand in the Gold Coast market that it is now leveraging with the new services to Auckland. Prior to the launch of Auckland, AirAsia X’s capacity at Gold Cast was relatively stable for over eight years.

Gold Coast Airport is also talking to several airlines about potential new international services. At least one new international route is likely to be announced by the end of 2016. However, Queensland Airports CEO Chris Mills told CAPA TV in an Aug-2016 interview on the sidelines of the CAPA Australia Pacific Aviation Summit that the focus at Gold Coast is mainly on growing the existing services.

Gold Coast is confident that international traffic will continue to rise rapidly and is now committed to opening a new terminal in 2018. Construction on the major upgrade project began in mid-2016.

“We are bursting at the seams”, Mr Mills told CAPA TV. “We just don’t have enough areas to park planes, we don’t’ have enough gates and we have congestion at various parts of the terminal. The terminal is not coping well.”

Gold Coast Airport’s current single-storey structure does not have any aerobridges, and was not designed for the more than 6 million annual passengers the airport now handles – or the more than 1 million international passengers. The new building will have three stories and provide four aerobridges, as well as at least three additional widebody parking stands. More aerobridges and widebody stands are planned as part of later phases.

“It really takes us to another level”, Mr Mills said. “Gold Coast Airport is a single level terminal building currently. The new terminal building will go three levels. We will have aerobridges for the first time at Gold Coast - that is something our customers have been telling us they would like to see. It will provide better amenity and better facilitation for our passengers.”

An instrument landing system is also planned as a separate project, pending final approvals. Gold Coast is now the only one of the top 10 airports in Australia without an ILS.

However, Gold Coast is keen to continue growing its full service airline capacity – both domestic and international. “Gold Coast over time has expanded and diversified so it’s not just low cost”, Mr Mills said. “It’s a mix of low cost and full service.”

The success of Hong Kong Airlines could attract other full service airlines from Asia.

While international growth has been much faster and in the spotlight, Gold Coast has also been growing domestically. Qantas has been the biggest driver of domestic growth over the past year, with increases to both Melbourne and Sydney. Qantas resumed services to Gold Coast in Oct-2012. 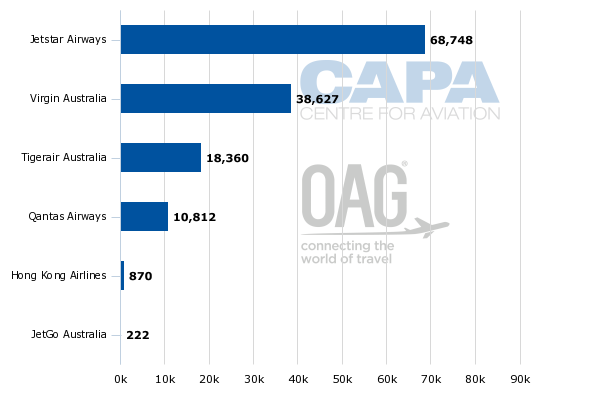 Note: half of Hong Kong Airlines' capacity at Gold Coast is counted as domestic as it operates a Hong Kong-Gold Coast-Cairns-Hong Kong circle routing.
Source: CAPA – Centre for Aviation & OAG.

Gold Coast is likely to remain one of the fastest growing airports in Australia.

The Gold Coast is one of Australia’s most popular tourist destinations – both for domestic and international travel. It also benefits from local economic and population growth.

The new terminal and expanded apron are necessary steps as Gold Coast prepares for further growth.

While the terminal will make the airport more appealing to full service airlines considering the destination, including from mainland China, the biggest opportunities remain in the emerging long haul low cost sector.