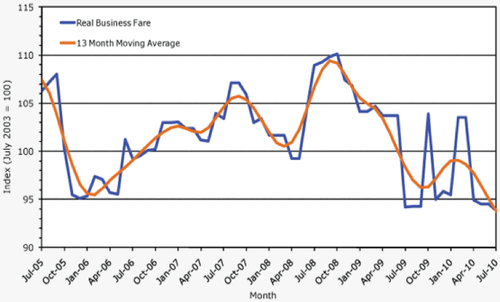 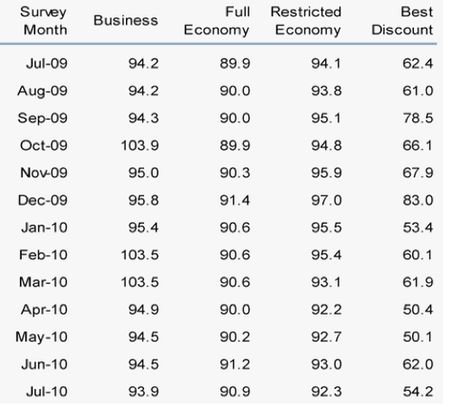 Lowest fares below half their 2003 levels

The index of ‘Best Discount’ domestic fares continued its steep downtrend again this month to 54.2 from 62.0 in Jun-2010 and 62.4 in Jul-2009. The index is marginally above lows established in May-2010 when fares had effectively halved from levels seven years earlier (Jul-2003). 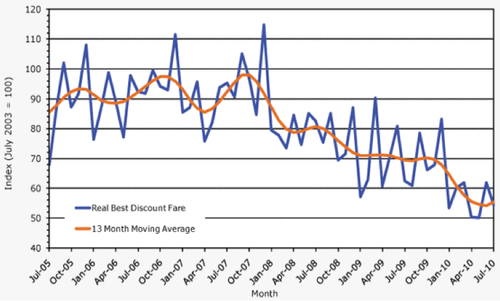 The outlook for domestic fares in Australia remains challenging in the absence of a sustained economic upswing, as airlines enter what is likely to be a bruising battle over market share. Indeed, only the Reserve Bank and the Treasurer seem to think there is strength in the economy - distorted by solid mineral exports to China.

Qantas this week announced it will take delivery of eight B787s two years earlier than planned in response to domestic competition from Tiger Airways and Virgin Blue. Virgin Blue's new CEO, John Borghetti has signalled plans to boost the airline's share of the corporate market from 10% to at least 15% in the next two years, which will require considerable investment in product, accompanied by attractive corporate rates.

Australia has avoided the worst effects of the global recession, but China’s cooling growth and expectations of a slowdown in US GDP could constrain Australia’s economic prospects. A strong Australian dollar also encourages overseas travel, further pressuring the domestic environment.