AoT investors reacted positively to the news that Thai Airways is obtaining further financing from local banks to support its working capital requirements and to retire other maturing debts. AoT's latest traffic results (for April) also showed an easing in declines in passenger numbers (-10.7%) and cargo traffic (-3.6%).

But the big story today is Australian Infrastructure Fund (AIX), whose shares have dropped 18% in morning trade in Sydney today following the completion of the institutional component of its one-for-two share non-renounceable offer at a heavily discounted AUD1.10 per security. The offer was announced to the market on 18-Jun-2009 when its securities closed at AUD1.62. The retail offer will open on 26-Jun-2009. AIX CEO, Jeff Pollock stated the instutional component was oversubscribed, with strong local and foreign interest and the compnay is "pleased with the support shown".

Australian Infrastructure Fund also cut its final distribution to 5c (down from the previous year's 8.5c) and warned the full-year dividend next financial year would be 10c. Latest traffic figures at its Australian airport interests are holding up reasonably well, but its European interests are struggling.

It is a similar story for Macquarie Airports, whose shares closed up 3.6% on Friday following approval of Sydney Airport’s 20-year Master Plan. Most of those gains have been given up, with the stock trading down 2.7% in morning trade in Sydney today.

Macquarie Airports' shares gained 3.6% on Friday , which forecasts an average 4.2% year-on-year increase in passenger numbers to 78.9 million passengers by 2029.

For updates on airport traffic from around the world as they happen, tune into Airport Business Daily. 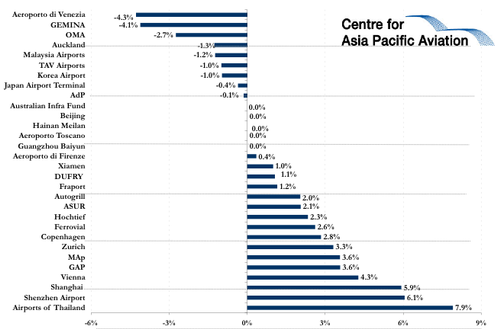