Passenger traffic between Australia and the Philippines grew by 39% in 2015, making it Australia’s fastest growing international market. The Australia-Philippines market is poised for more rapid growth driven by expansion at Cebu Pacific Air and Philippine Airlines (PAL).

PAL is planning to use its new A321neo fleet to launch new nonstop flights to Brisbane and potentially add a second frequency to Sydney. Cebu Pacific plans to launch service to Melbourne as it expands its A330-300 fleet.

However, overcapacity is a major concern. Cebu Pacific’s entrance has stimulated demand but impacted load factors and yields. In 2015 the average load factor on Australia-Philippines flights was less than 67%, including a dismal 60% at PAL and only 64% at Cebu Pacific. 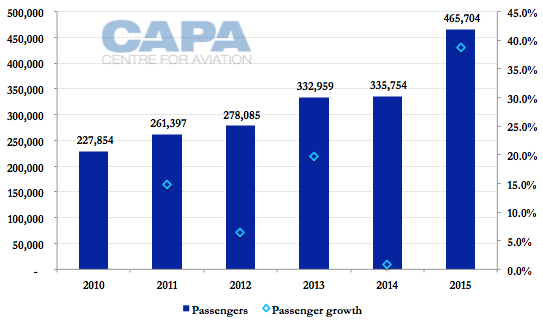 Back in 2010 the Philippines was the sixteenth largest international market from Australia. Over the last five years the Philippines has surpassed Korea, Papua New Guinea, South Africa and Vietnam.

Cebu Pacific was the main driver in 2015

The growth in 2015 was driven primarily by Cebu Pacific. Cebu Pacific launched services to Sydney in Sep-2014 but only flew 30,348 passengers to and from Australia in 2014 as it took time for the new route to mature.

In 2015 Cebu Pacific carried 138,793 passengers on the Sydney-Manila route, giving it a leading 41% share of the market. Cebu Pacific currently operates four to five weekly flights on Sydney-Manila compared to seven weekly frequencies for PAL and a consistent five weekly frequencies for Qantas but uses much higher density aircraft than both its competitors. 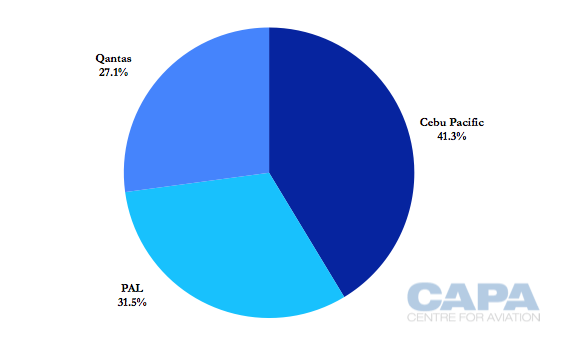 Note: based on passengers carried
Source: CAPA – Centre for Aviation and Australia BITRE

Philippine Airlines’ Australia traffic was also up 17% in 2015

PAL also expanded in Australia in 2015 as it added capacity to Sydney and Melbourne. The PAL expansion was likely a competitive response to Cebu Pacific.

While PAL is the only nonstop competitor between Manila and Melbourne, Cebu Pacific has flagged its intention of also serving Melbourne since prior to launching Sydney. Cebu Pacific also has noticed that some of its Manila-Sydney passenger self-connect in Sydney, mainly to Melbourne.

PAL serves three other Australian destinations – Brisbane, Cairns and Darwin. However, PAL only launched Cairns in Dec-2015 and therefore Cairns did not have a meaningful impact on the overall Australia-Philippines figures for 2015. A majority of PAL’s Manila-Cairns passengers also continue on the same flight to Auckland and are not counted under the Australia-Philippines figures.

PAL launched Manila-Darwin-Brisbane service in Jun-2013 but PAL carried approximately the same number of passengers on this route in both 2014 and 2015. Overall PAL’s passenger traffic to and from Australia was up 17% in 2015 driven entirely by increases in both Melbourne and Sydney.

PAL has grown significantly in Australia over the last three years 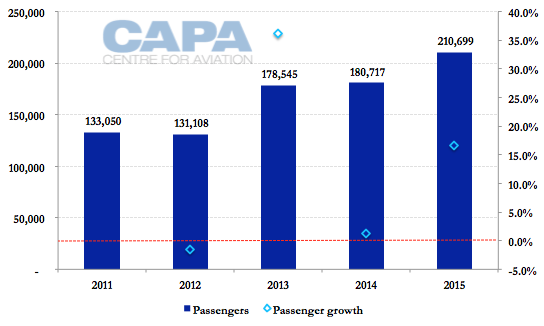 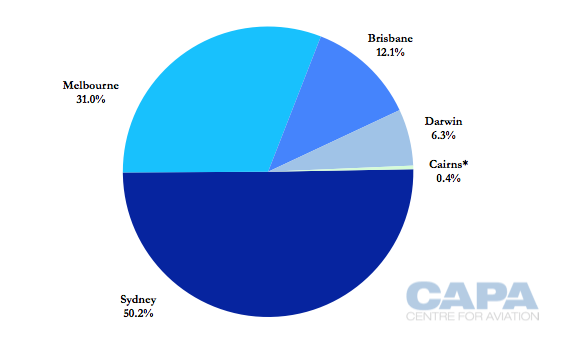 PAL also briefly operated Manila-Darwin-Perth in 2013 before suspending the route after only three months due to lack of demand. PAL flew less than 6,000 between Manila and Perth in 2013, according to BITRE data.

PAL is keen to launch nonstop services to Brisbane, which it currently serves with four weekly A320 flights via Darwin. Approximately two thirds of PAL’s passengers on the Manila-Darwin-Brisbane route now originate or are heading to Brisbane.

The Manila-Brisbane route is too thin for widebody aircraft and is out of the range of the current generation A320. However, PAL president Jaime Bautista told CAPA on the sidelines of the 2-Jun-2016 IATA Annual General Meeting that PAL may deploy the A321neo on Manila-Brisbane.

PAL has 21 A321neos on order for delivery from 2017. Mr Bautista said PAL expects to receive its first two A321neos in 2H2017. PAL is looking at deploying its first batch A321neos to Australia and India.

Manila-Perth nonstops would also be an option for the A321neo but is not currently being considered. Manila-Perth is a smaller market than Manila-Brisbane and PAL is likely concerned about the economics of Perth given the experience it had in briefly serving Perth in 2013.

The launch of a nonstop service to Brisbane would likely result in a further increase in PAL’s Australia capacity but the size of the increase hinges on what PAL decides to do with its Darwin service. Manila-Darwin is a small local market and may not be able to support its own turnaround flight although PAL could try make the route work by focusing more on transit traffic beyond Manila.

Mr Bautista said PAL may also use the A321neo to introduce a second daily flight on the Manila-Sydney route. PAL currently serves Manila-Sydney daily with 254-seat A340-300s but at times uses 368-seat A330-300s.

A double daily A321neo operation would increase PAL’s total Sydney capacity by approximately 50% compared to the current one daily A340-300 flight. PAL configures its A321ceos with 199 seats but has been considering a slightly less dense configuration for the A321neo to accommodate lie flat business class seats.

Opting for a lie flat business class seat would help PAL compete for premium traffic on longer medium haul routes such as Manila-Sydney. PAL also believes offering the choice of two frequencies per day will enable it to increase its share of corporate traffic and give it a unique selling point. Qantas currently operates five weekly frequencies on the Manila-Sydney route while Cebu Pacific operates between four and five flights (depending on the time of year). Cebu Pacific uses single class high density A330-300s while Qantas uses two class A330s (mainly -300s but -200s are used at times).

The A321neo has sufficient range to serve all of PAL’s Australian destinations nonstop. Melbourne could be another option as it would enable PAL to offer a daily flight in the Melbourne market without significantly increasing capacity. PAL currently serves Melbourne with three weekly 368-seat A330-300 flights.

PAL does not need the A321neoLR, which will enter service in 2019, to reach Australia. However Mr Bautista said PAL will most likely go with the additional fuel tank option for its first batch of A321neos.

PAL is now free to add capacity to Sydney – along with Brisbane and Melbourne – following the expanded air services agreement forged between the Philippines and Australia in May-2015. Previously there was no room for expansion by any Philippine carrier to any of Australia’s four main international gateways – Brisbane, Melbourne, Perth and Sydney.

The new agreement immediately provided an additional 1,500 weekly one-way seats to the four main cities and stipulated the possibility of another 2,000 weekly one-way seats over time. Darwin and other secondary Australian cities enjoy open skies but PAL’s Manila-Darwin-Brisbane service counts towards the cap as the flight does not turn around at Darwin. Currently only PAL’s Manila-Cairns-Auckland service is excluded from the cap.

Cebu Pacific initially intended to launch Melbourne by the end of 2015. The latest delay was caused by problems securing a gate at Manila for the proposed service.

Cebu Pacific executives said during the group’s 1Q2016 analyst call in May-2016 that Melbourne and Honolulu remain possibilities for 2016. In addition to working with Manila airport authorities to secure the needed gates and slots, Cebu Pacific is negotiating possible leases on two additional A330-300s.

Cebu Pacific currently operates six A330s on five long haul and three short haul routes. Cebu Pacific could free up an A330 for Melbourne by redeploying aircraft from short haul routes but executives said they want to continue using the A330 on domestic trunk routes to maintain its market share.

The timing of Cebu’s Melbourne launch therefore seems to hinge on securing gates, slots and additional aircraft. Cebu Pacific remains keen to serve two destinations in Australia and will almost certainly launch Melbourne at some point in the near to medium term.

Cebu Pacific and PAL however could face challenges in the Australia market as more capacity is added. Both airlines have had unsustainably low load factors on their Australia routes over the last year. As competition further intensifies there will likely be further pressure on yields and load factors.

In 2015, there was a 53% increase in nonstop seat capacity in the Australia-Philippines market, according to BITRE data. This more than outstripped the previously mentioned 39% increase in passenger traffic. As a result the average load factor dropped 6.6ppts to only 66.6%. This marks the lowest average load factor on Australia-Philippines routes in at least a decade. 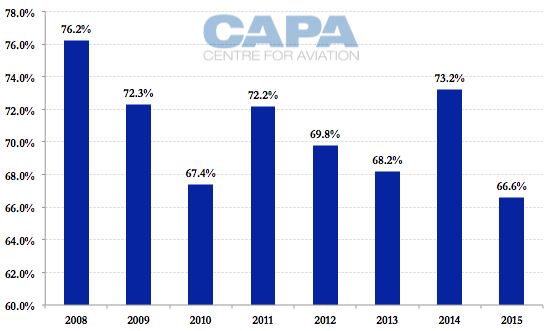 Among Australia’s top 15 international markets, Australia-Philippines was also the only market with an average load factor below 70%. This is hardly an encouraging sign.

It could take a few years for the capacity added over the last two years to be fully absorbed – assuming there is not any further significant expansion. If Cebu Pacific and PAL pursue further expansion as intended the market could suffer from overcapacity for several years.

Qantas’ load factor on Sydney-Manila route has been very high

The drop in load factor have been completely driven by Cebu Pacific and PAL. The only other airline operating nonstop flights between Australia and the Philippines, Qantas, has been able to improve its already relatively high load factor over the last two years.

In 2015 Qantas’ Australia-Philippines load factor was 91%, an astonishing 31pts above PAL and 27pts above Cebu Pacific. Qantas has typically enjoyed higher load factors than its Philippine competitors but the gap has widened significantly.

Australia-Philippines inbound and outbound average load factors by airline: 2011 to 2015

Qantas has benefited from capacity discipline – it has reduced capacity while its competitors have added aggressively. In fact Qantas’ traffic on the Sydney-Manila route was down 6% in 2015 to 91,075 passengers despite the 2ppts improvement in load factor.

Qantas also has likely benefited in the Australia-Philippines market from its partnership with Emirates. Manila is a connecting point for Qantas and Emirates, enabling Qantas to sell excess Manila capacity to Emirates (although Australia-Europe traffic routed via Manila is typically very low yielding).

Additional capacity increases by Philippine competitors could start to impact Qantas. However the bigger question marks are with Cebu Pacific and PAL – and specifically whether they will be able to maintain their Australia capacity.

There is a lot of potential for growth in the Australia-Philippines market, particularly as lower fares continue to stimulate new demand in both the outbound and inbound sectors. But the market is highly seasonal and directionally imbalanced.

Philippine carriers rely heavily on ethnic or visiting friends and relatives traffic, making it hard to maintain high year-round load factors. Cebu Pacific and PAL average load factors in Australia improved in 1Q2016 but after a strong January slipped in February and March. In Mar-2016, the last month of available BITRE data, Cebu Pacific posted an average load factor of only 60.8% and PAL 58.6%.

Significant growth and sustainable load factors may only be achievable with significant sixth freedom traffic beyond Manila. However, given the intense competition in Australia’s international market and the fact PAL and Cebu Pacific are not well known brands outside the Filipino community any sixth freedom traffic would be low yielding and likely carried below cost.

The preference would be to grow the local market and stimulate more demand from Filipinos. But there is a limit to this growth and the low load factors at Cebu Pacific and PAL is an indication of the challenges that lie ahead.