A significant expansion in air traffic rights for Chinese airlines to Australia saw their stock prices jump 3-5%. Ironically, the growth made available from this agreement may mostly be unprofitable, at least in the short term. This explains why China is pursuing gradual liberalisation and not the open skies Australia wants. There is no doubt which group of airlines gain the most: it is the Chinese carriers, who already account for 92% of Australia-China non-stop seat capacity. Qantas, the only Australian airline to operate non-stop, is at 8%.

But Australia is still very much the winner in the bigger picture. Chinese visitor numbers to Australia in the first nine months of 2014 were up 13.4%, and overall volumes more than doubled between 2009 and 2013. As with other destinations in the region, Chinese are quickly becoming a key source market. For Sydney Airport, Chinese passengers account for half of its international growth while at Melbourne Airport China is its largest long-haul market. The expanded agreement is already bearing fruit with capacity additions from Air China and China Eastern as well as a new service from Xiamen Airlines to Sydney expected to be launched before the end of 2015.

Australia on 23-Jan-2015 announced an expanded air service agreement with mainland China. The details are:

From all other Chinese cities to major Australian gateway cities (Sydney, Melbourne, Brisbane and Perth), both Australian and Chinese airlines can operate:

A further 2,500 weekly seats in each direction are available to both Australian and Chinese airlines when linking an Australian gateway city to another city in Australia (for example, Sydney-Cairns-Shanghai) as part of a multi-stop international service.

The agreement also allows for three beyond points of choice except to North America and six additional intermediate points, for example allowing Qantas to fly to Europe via China (although China had already granted this right, after a long experiment allowing cargo fifth freedoms) or for a Chinese airline to fly to Australia via another Asian city.

Most of the Australia-China flights are in the first category, from Beijing/Guangzhou/Shanghai to Sydney/Melbourne/Brisbane/Perth. There are slowly increasing flights from other Chinese cities to major Australian cities, such as Chengdu-Melbourne and Nanjing-Sydney.

Although totally unrestricted on the Australian side, services to non-gateway Australian cities have been limited and are typically charters, such as China Southern to the Gold Coast or China Eastern to Cairns. Flights from non-major Chinese cities to Australia typically require subsidies, and even then profits can be challenging.

The benefit is almost exclusively to Chinese airlines – and Australia's economy

Which side benefits more? From an airline perspective, there can be no doubt the gains are almost exclusively in favour of Chinese airlines. They account for 92% of the non-stop China-Australia. Qantas a single daily Sydney-Shanghai Pudong flight accounting for 8%.

There are indirect benefits to Qantas. The carrier has a proposed JV with China Eastern, without which Qantas would have struggled to make gains in the market. Stronger Chinese carriers could weaken third-country Australia-China hub carriers (Cathay Pacific, Singapore Airlines) which could translate to a gain for Qantas. The intermediate and beyond points are unlikely to be useful to Qantas in the immediate future, and besides Qantas already held the right. 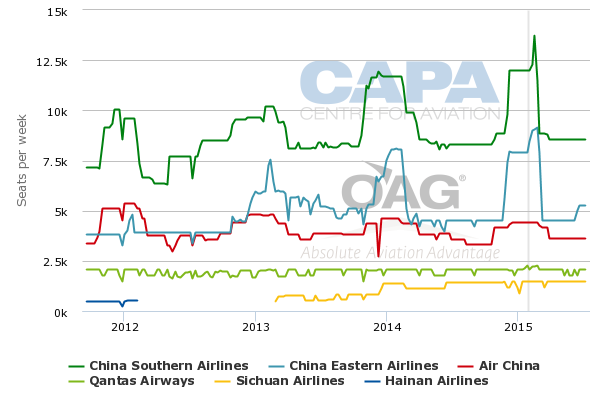 Arguably larger in economic impact is the contribution of Chinese tourists to Australia. The China-Australia market is mostly outbound Chinese, although Chinese carriers hope to change this and are strongly pushing campaigns like China Southern's "Canton Route" from Australia to Europe via Guangzhou.

Chinese visitors to Australia more than doubled between 2009 and 2013 (latest annual data), to 715,000. There are however questions how much of Chinese visitor holiday spend is made and kept in China. Visitors for the first nine months of 2014 were up 13.4%. Australia was the 43rd largest country in terms of volume of visitors but 11th for overall spend and first for spend per visitor (this partially reflects Australia's higher costs). 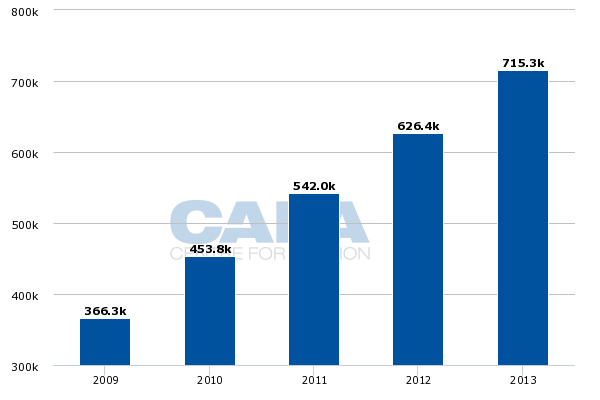 Half of Australia's international passengers travel under an open skies agreement. At CAPA's Australia Pacific Aviation Outlook Summit in Sydney in Aug-2014, Australian Department of Infrastructure and Regional Development Secretary Mike Mrdak outlined that Australia would like to form an open skies agreement with China. Australia expects the China market to grow 10% per annum. This is lower than the 15%+ growth rates in visitors in recent years but reflects growth coming off a much higher base than in past years. 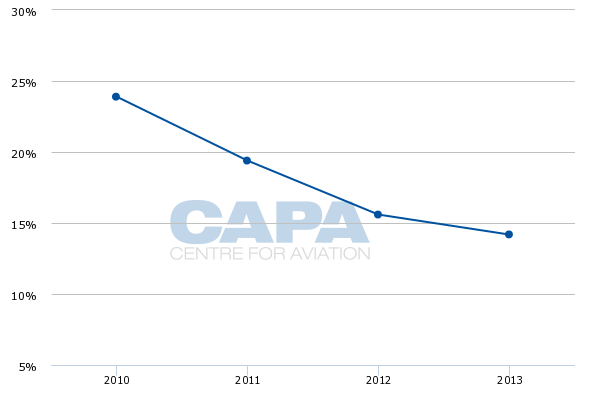 China wants to see its airlines sustainably grow. A cap on capacity ensures the floodgates are not opened. Mr Mrdak noted that with two million annual China-Australia seats operating at a 75% load factor, there were still half a million empty seats. This does not necessarily create the sustainability Mr Mrdak's department aims to have in aviation. Mr Mrdak noted over-growth means consolidation with capacity removals impacting airports and tourism economy.

On a panel discussion, Sydney Airport CEO Kerrie Mather partially disagreed with this view. Ms Mather noted the major three airlines in China may have been content with the bilateral arrangement, but smaller airlines that want to grow are held back. Ms Mather used the example of Sichuan Airlines only being able to serve Sydney twice a week under the previous bilateral.

The announcement of the expanded traffic rights came as Ms Mather was in China meeting with airlines. “We have been in discussions with a number of Chinese airlines that want to fly to Sydney, but the existing agreement has been at capacity over the peak season for a number of years,” Ms Mather said in a statement.

Sydney is interested in building services from more secondary Chinese cities, with Ms Mather noting: “Some of our largest unserved markets are outside of the primary hubs of Beijing, Shanghai and Guangzhou and our strategy is to attract more visitors from these cities.” While the route profitability of such secondary city services is questionable, airports are eager for the services and Chinese provincial governments are willing to provide subsidies so Chinese airlines can continue their international expansion.

Ms Mather's visit was reported to have successfully secured a three or four weekly service to Sydney from Xiamen Airlines, which is still waiting to deploy its new 787s on long-haul routes. The Sydney service is expected before the end of the year but Xiamen may make its long-haul debut earlier on a European route.

Air China meanwhile will launch seasonal Beijing-Melbourne service while China Eastern will add an extra weekly flights between Sydney and Shanghai Pudong, supplementing its existing daily service. Air China's announcement was flagged as part of an earlier global route launch while China Eastern's increase was raised in its application with Qantas for a joint-venture.

China Southern has set out to have 55 return services to Australia and New Zealand this year. After large growth recently in Australia (and facing bilateral limits), China Southern grew in Auckland to establish more direct China-New Zealand traffic flows. Many Chinese visitors to New Zealand currently arrive via Australia.

Growth may be unprofitable but long-term opportunity remains

Reuters reported that the expanded China-Australia air service agreement pushed shares at the main Chinese airlines up about 3-5%. Ironically, the growth the expansion allows may create short- and medium-term profitability challenges at those airlines. But for receiving airports, this is not a concern – unless the service ends. Commercially sustainable operations are in everyone's interests.

Likewise the Chinese government providing short-term subsidies in hopes of long-term service may face the reality that some flights cannot be profitable without subsidies.

Governments can continue subsidising long-haul expansion or have a public loss by losing the service. The CAAC may well be wise to not pursue open skies and the flood of capacity and resulting volatility that would bring its airlines.