Austin airport at 20: Prepping for doubling of passengers by 2040

Austin Bergstrom International celebrates its 20th anniversary in 2019, and the airport’s passenger growth shows no signs of slowing as its roster of routes continues to grow with new international and domestic flights.

Now the airport is working to shape its future for the next 20 years as its embarks on an expansion plan to roughly double its passenger capacity in that time period. Austin is one of numerous US mid sized airports working on significant expansion to support robust projections in passenger growth.

The airport’s growth in a relatively short period of time is remarkable, and with Austin’s stature as a strong tech hub and a low unemployment rate, it is positioned to remain one of the fastest growing airports in the US.

Austin’s passenger levels jumped roughly 14% in 2018 to nearly 16 million. It is the highest year-on-year growth the airport has posted since 2009, and from Jan to Apr-2019, its passenger levels increased by 9.3%. 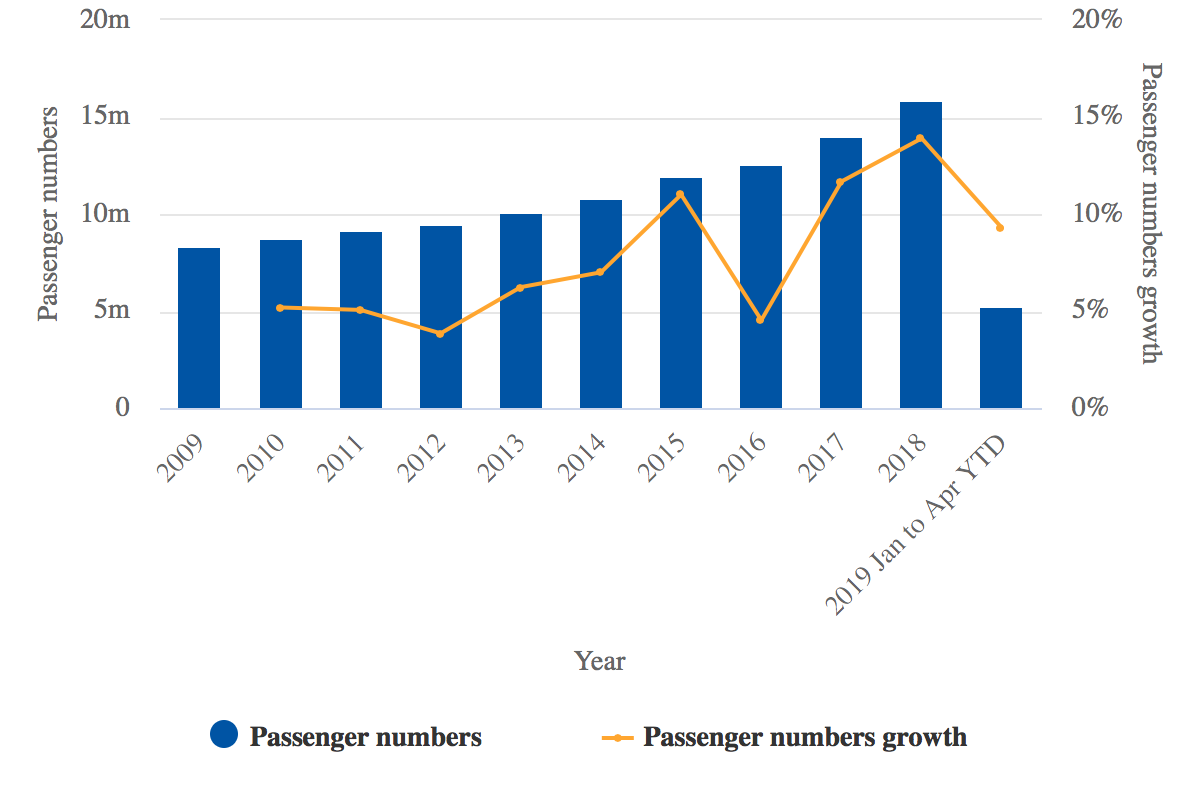 This year marks the airport’s 20th anniversary. Austin Bergstrom opened in May-1999, and was the last airport built in the 20th century.

At 20, Austin airport remains relatively young, which makes its growth all the more impressive. At the time it opened, Austin Bergstrom handled roughly 6.6 million passengers annually that were traveling to 29 destinations. Fast forward to 2018, and its passengers have more than doubled. It total destinations have jumped 124% during that time period from 29 to 65 (the current number of destinations is sourced from CAPA and OAG).

During the airport’s two decades in operation, Austin has become tech hub, is consistently ranked one of the best places to live in the US, and, according to to local news outlet The Statesman, the city’s unemployment rate in Apr-2019 was 2.3%. The US national unemployment rate is 3.6%.

Austin has marked some major service milestones during the last few years with British Airways launching flights to London Heathrow in 2014. Norwegian offers service to London Gatwick, and in May-2019 Lufthansa introduced service to Frankfurt, a route previously operated by Condor. 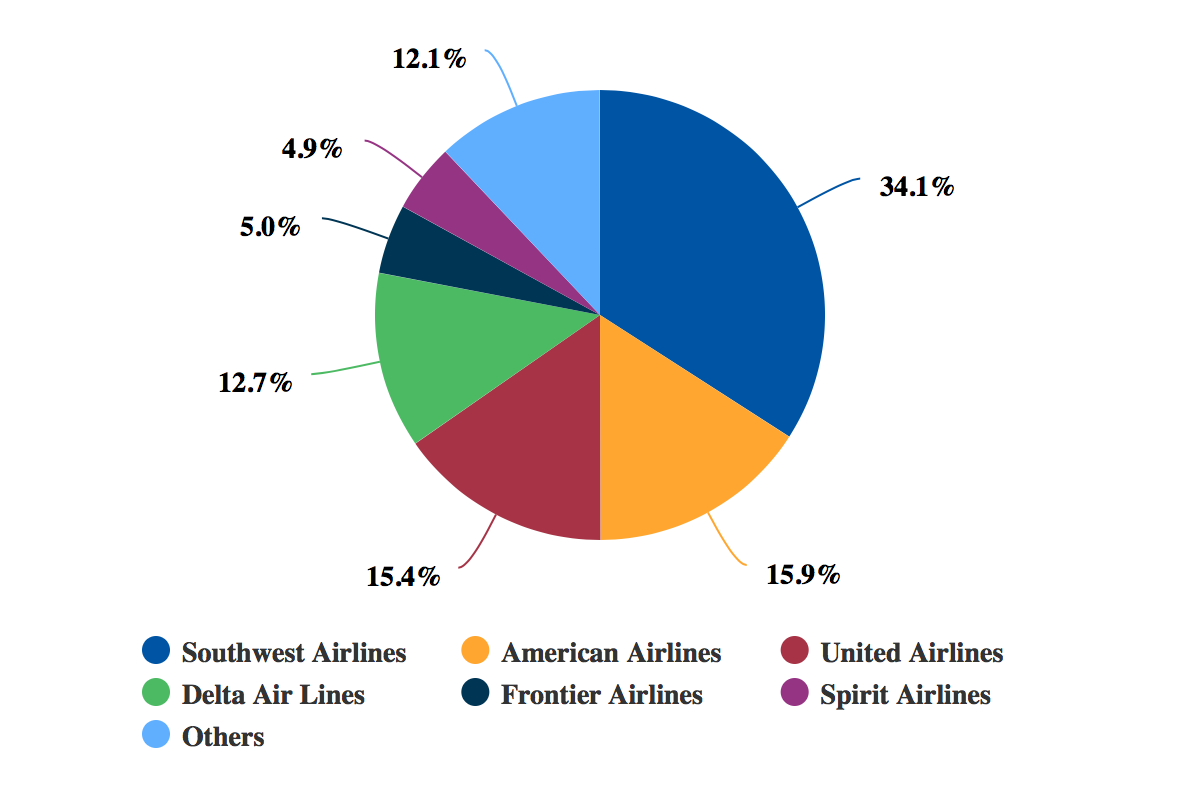 Austin also has solid ULCC representation, and the US’ largest ULCC Spirit has added nine new cities from Austin in 2019. The airport is one of many mid sized cities Spirit is linking to larger leisure destinations of Fort Lauderdale, Las Vegas, New Orleans and Orlando. Spirit also serves more business oriented destinations including hub airports of Chicago O’Hare, Denver and Detroit, and also operates service from Austin to Baltimore Washington International airport.

For the first four months of 2019,  posted solid passenger growth. American posted the largest increase at 14% followed by 12.5% growth for Alaska Airlines.

Austin’s original passenger capacity was 11 million, The Statesman has reported, which is significantly below the 15.8 million passengers traveling through the airport in 2018.

The airport has embarked on a 20-year expansion to accommodate potential annual passenger levels of 30 million or more by 2040. Nine new gates are opening at the airport in 2019, and the Austin city council has approved a USD4 billion plan to build a new terminal with 32 new gates and other upgrades to the airport including a pedestrian bridge linking the two terminals.

The funding structure for the expansion has not been solidified, according to The Austin Monitor, which has reported no formal financing proposals have been issued. The publication reported decisions about financing the expansion are likely to be made in 2020, cited airport officials who stated Austin Bergstrom will require some level of public support to keep it competitive without passing costs onto airlines and passengers.

That is a common challenges many mid-sized US airports face as they undertake expansion projects. Austin and those other airports need to ensure they keep their cost per enplanement reasonable. Nashville International airport, which has similar passenger levels to Austin (16 million in 2018), in the midst of an expansion plan to handle projections of 23 million annual passengers by 2037. The USD1.2 billion project includes an expanded international arrivals facility, a new concourse, additional parking, a new hotel and expanded security lines. According to the Nashville Business Journal, the project – due for completion in 2023 – is being funded by federal and state aviation grants, bonds passenger facility charges and other airport funds.

US medium sized airports face an interesting paradox of working to accommodate welcome growth in passenger numbers while ensuring the airlines that are fueling that traveler expansion do not face significant rises in their costs to operate from those facilities.

Overall, it is a welcome challenge to have, and there is no doubt Austin Bergstrom is working to  ensure its expansion is funded to ensure the airport’s meets projections of doubling its passenger growth during the next 20 years.