The ATR Assembly of Members has appointed Filippo Bagnato (62) as CEO of ATR. He succeeds Stéphane Mayer, whose three-year mandate has expired. Filippo Bagnato previously served as CEO of ATR between 2004 and 2007. During the last three years, while he was Finmeccanica Executive VP Technical, Industrial and Commercial Development, he assumed the chairmanship of the ATR’s Board.

His reappointment to the CEO role responds to the aim of ATR’s shareholders, Alenia Aeronautica and EADS, to “ensure the continuity of the ATR programme management and its further growth, keeping up strong relationships with customers and privileged confidence from them”. ATR’s Assembly of Members expressed its appreciation of Stéphane Mayer’s contribution to the ATR programme.

ATR is hoping Bagnato can re-establish the glory days for the company in terms of aircraft orders (266 orders and 77 options between 2005 and 2007), as well as keeping higher rates of production and the development of the ATR ‘-600 series’ on track to enter into service in 2011 as planned.

The turboprop manufacturer achieved record turnover of USD1.4 billion in 2009, almost trebling in size since 2004. But new orders fell to 40 (plus 17 options) and the manufacturer’s backlog (while still representing over two years of production) has fallen back to 2006 levels as a result of the global financial crisis.

For ATR, 2010 is a year for stabilisation – of orders, deliveries and turnover. It is consolidating deliveries above 50 aircraft during 2010, noting in Jan-2010 that it would “wait to get a better overview on the recovery of the economy in order to continue the delivery ramp up.”  A decision on production rates will be one of the early issues on Mr Bagnato’s agenda.

Elsewhere, Boeing (which recently raised its narrowbody production rates) declared a regular quarterly dividend of USD0.42 cents per share, payable on 03-Sep-2010 to shareholders of record as of 06-Aug-2010. 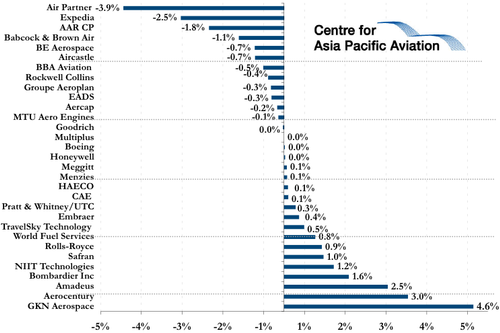