North and South American airlines stocks shot higher on the same day Atlas Air Worldwide Holdings raised its earnings guidance for FY2010 and IATA announced it expects airlines to report a combined net profit of USD8.9 billion for this year. The Dow (+0.1%) also rose after US Federal Reserve stated it may introduce further measures to stimulate the economic recovery.

Atlas Air Worldwide Holdings (+7.5%) soared after raising its earnings guidance for FY2010 from previous guidance of USD4.35 per share to USD5.30 per share, attributable to stronger airfreight demand than anticipated and continued tight supply. President and CEO, William Flynn, stated the carrier expects 2010 to be a record year for commercial airfreight demand and AAWW. Atlas Air is scheduled to release its 3Q2010 financial results on 01-Nov-2010.

Republic Airways (+5.3%) was also up. News broke during trading that subsidiary, Frontier Airlines, plans to launch additional international services in Central America and the Caribbean. Frontier is evaluating possible services from its Denver hub to Belize, Roatan in Honduras, Grand Cayman and Montego Bay in Jamaica.

American Airlines (+3.6%) was also up after announcing it expects revenues to increase 6.6-7.6% year-on-year in 3Q2010, while revenue per ASM (RASM) is expected to rise 9.8-10.8% for the quarter. It expects to end the Sep-2010 quarter with a cash and short-term investment balance of USD4.8 billion, including USD450 million in restricted cash and short-term investments.

In terms of traffic, American expects to operate 33,508 million RPMs in its mainline operations for 3Q2010, with capacity (ASMs) expected to reach 33,508 million.

Allegiant shares rose 1.6% on the day Peppermill Casinos tapped Allegiant for a three-year, fixed-fee agreement to provide air transportation for its three Wendover, Nevada, properties. Allegiant expects to generate more than USD20 million in revenue from the agreement and Peppermill will bear the fuel risk.

Launching on 1-Mar-2011, Allegiant will base one 150-seat, MD-80 in Wendover to provide charter services to a number of small cities throughout the US for the Peppermill’s three Wendover resort properties: Montego Bay Casino Resort, Rainbow and Hotel Casino and Peppermill Hotel and Casino. It will also establish a base in Wendover with more than 20 employees, including maintenance, flight crews and station personnel.

Elsewhere, Copa (-0.4%) and Southwest Airlines (-0.1%) were the only carriers to end trading lower, while Expressjet, GOL, WestJet and AirTran were all flat. 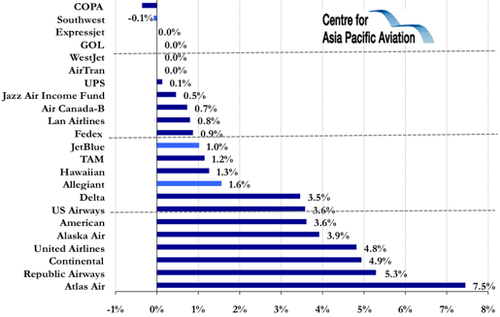