ATA reveals early signs of traffic improvements, but US airlines not out of the woods yet

Traffic data for Jul-2009 from the Air Transport Association of America (ATA) reveals some early signs of improvements, with member carriers seeing an uptick in traffic (RPMs) in the month. But US airlines are by no means out of the woods, with the US aviation industry still seeing heavy price discounting. An interesting barometer will be the release of ATA yield data for Jul-2009 shortly. Jun-2009 yields showed further deterioration from May-2009.

During Jul-2009, ATA member traffic (RPM) reductions were generally much milder than in the previous six months of the year. While Pacific RPMs growth showed the most drastic improvement (from -11.9% in Jun-2009 to -1.3% in Jul-2009), the Pacific was the first market to deteriorate last year, with traffic already falling in Mar-2008. By Jul-2008, Pacific RPMs were already down 4.5%, so the decreases are now compounding.

However, still of concern for the US carriers is the volatility of traffic, reflecting economic uncertainty and one-off events. This is further complicating the airlines’ ability to match demand-supply levels. 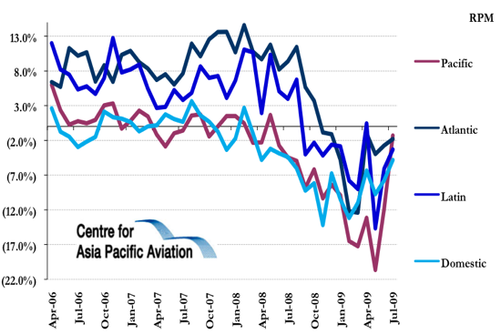 The volatility of demand compares to the relative consistency in the carriers’ capacity (ASMs) reductions. 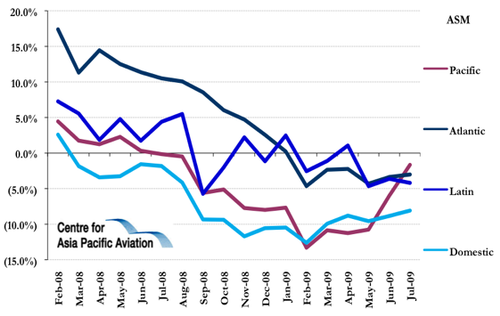 Load factors improve in Jul-2009; above 80% across the board

The deep capacity cuts and stimulatory pricing has helped ATA members to report increasingly strong load factors across the board in Jul-2009, in the range of 82.4% (Pacific) to 88.0% (domestic), with a system wide average of 87.1%, a 2.3 ppt year-on-year increase and the second consecutive month of improvement.

Soft passenger demand continues into the second half

According to ATA, soft passenger demand continued in Jun-2009, with a 5.2% year-on-year reduction in passenger numbers, with negative growth across all regions, led by a 5.5% reduction domestically. However, the reductions do represent an uptick in demand from the lows witnessed at the beginning of the year.

ATA Airlines passenger number growth by region: May-2007 to Jul-2009 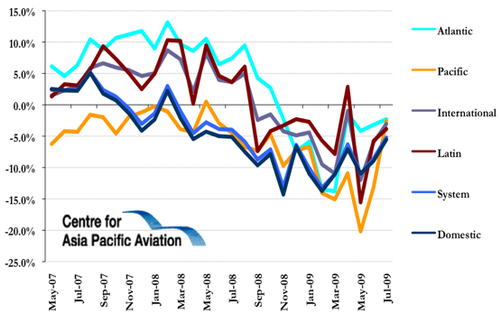 Weakness expected for the remainder of 2009

Looking forward, ATA stated the economic climate is continuing to negatively affect demand, with the most current schedule filings for 4Q2009 showing an astonishing 22% fewer domestic departures than in the same period of 2000, equating to a reduction of approximately 6,660 flights per day. The impact of this reduction on related travel sectors, such as accommodation, car hire and other services has been profound.

ATA is also forecasting a 3.5% year-on-year decline in passenger during the eight day Labor Day Holiday Travel period (02-Sep-2009 to 09-Sep-09), to 16 million passengers travelling globally on US airlines. The projected decline consists of a 3.5% reduction in domestic travel and a 3.0% drop in international travel, despite systemwide year-on-year average-fare reductions in 1H2009.

ATA stated the “deep global recession” and “unnaturally high and volatile energy prices” are the primary drivers of the expected reduction. ATA, however, stated load factors would be high during the period.

Yields likely to remain weak, but not getting worse

While ATA is yet to release yield data for Jul-2009, a few of the US carrier have released PRASM data upon the release of their Jul-2009 traffic results, with the data revealing a mild improvement from figures in Jun-2009.

Continental saw the sharpest yield contraction in the month, down 16.5% year-on-year - its third largest slump in the past 18 months. Among the LCCs, Southwest estimated PRASM to have decreased in the 5-6% range, although this represented an improvement on the 9-10% reduction the previous month. JetBlue's PRASM decreased 9% year-on-year,  a slight improvement from Jun-2009’s 12% plunge.

All eyes now turn to the consolidated ATA yield figures for Jul-2009 due out shortly.