Asiana Airlines continues to diverge from Korean Air, which cut capacity and grew revenue while returning to the black. Not so for Asiana, which in 1Q2014 grew capacity but reported a 4.1% international yield decrease. While its situation improved, Asiana remained in the red. Lack of stability in the Korea-China and Korea-Japan markets, large in overall size and yield, continue to impact Asiana.

Asiana benefitted from reduced fuel costs, but unlike Korean Air did not display large cost discipline in other areas of its business.

Further changes do not paint a rosy picture as North Asia-Southeast Asia and North America-Asia competition increase. Asiana wants to reduce its exposure to short-haul traffic, requiring growth in long-haul services as well as to Southeast Asia for transfer traffic. Incremental long-haul expansion is occurring to Istanbul, Paris and Seattle while Asiana's recently-delivered A380 will help accelerate long-haul growth. 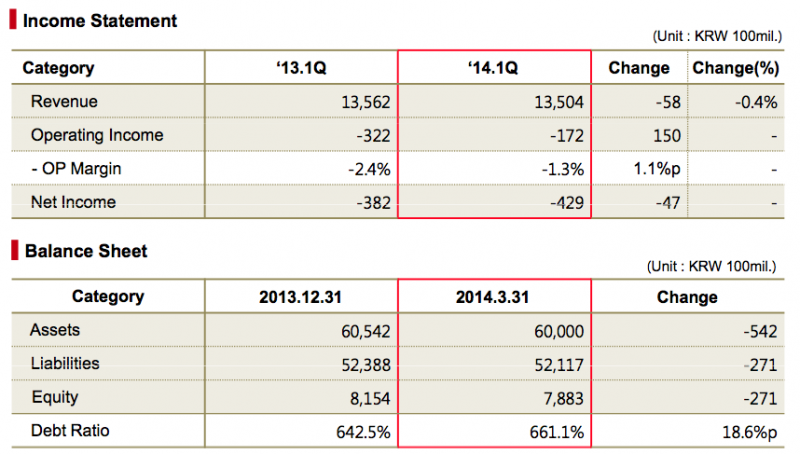 Asiana's peer Korean Air also reported an improvement in 1Q2014. But unlike Asiana, Korean Air returned to the black, although at an operating margin under 1%.

See related report: Korean Air returns to profit in 1Q2014 on the back of yield recovery and cost discipline

Lower fuel prices are the key cost improvement at Asiana, but other cost areas saw improvement: labour and lease rental increased below capacity expansion while sales commission decreased despite the increased capacity and load.

There were large changes in depreciation/amortisation and maintenance, but these polar swings are generally consistent with fleet changes; in Asiana's case they nearly balance each other out. 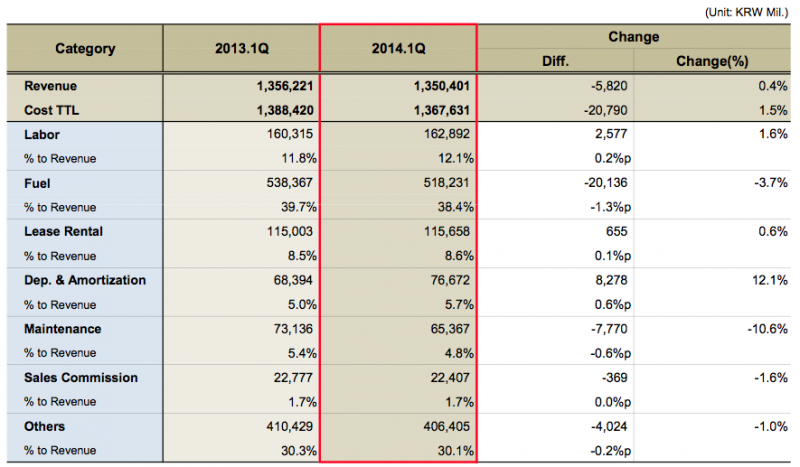 Asiana in 1Q2014 saw about two-thirds of its revenue come from passenger divisions. This is the same from 1Q2013 but with a change in mixture as domestic passengers decreased their share by 1ppt while domestic increased by 0.9ppt. 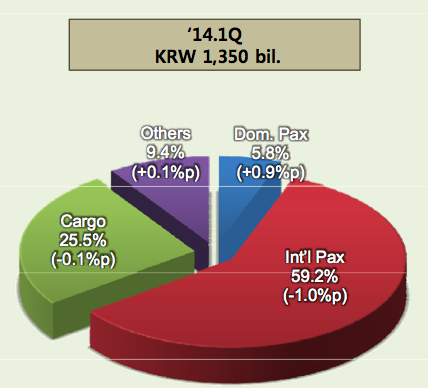 Cargo held about flat with a 26% contribution to the business, a high and worrying exposure given the continued under-performance of the cargo sector in Asia.

Asiana continues to take a long-term view that it must re-focus its business by reducing its exposure in short-haul markets. Asiana sees the short-haul markets of Japan becoming over-competitive. LCCs are entering while the yen's depreciation and won's gain makes it more expensive for Japanese to travel abroad. Further, there are political tensions that are reducing travel demand even more. This is all impacting Asiana's service to Japan's smaller cities that are primarily outbound markets.

To address these smaller markets in Japan, Asiana in 2013 introduced a single-class A320 that removed business class seats. Asiana has mentioned an unspecified revenue benefit from this change, implemented on eight aircraft.

Korean Air generally reported good trends amongst its revenue and capacity balance. But not so for Asiana. China (a large market), domestic Korea and the CIS (a very small market) saw revenue growth above capacity changes, although Chinese yields are recovering from previous lows. Oceania saw a decrease in revenue despite increase in capacity while Japan's revenue contribution fell twice as fast as the decrease in capacity, worrying considering the high yields in the Korea-Japan market.

The big worry is in Southeast Asia where a nearly 4% increase in revenue was significantly below the approximately 18% increase in capacity. The short-term prospects are not encouraging. New Southeast Asian LCCs like Thai AirAsia X and NokScoot will target Korea. At the same time, Asia's full-service carriers are competing in North Asia-Southeast Asia traffic flows.

And all signs point to developments close to home as Korean Air's LCC Jin Air is likely to launch long-haul low-cost flights. The concern is Asiana's development in long-haul traffic and required Southeast Asian transfer flights is coming too late. Asiana will have to bed down its Southeast Asian performance at the same time there are significant structural changes in the market.

Asiana is encouraged that its two largest cargo segments – machinery and electronics – saw tonnage grow by 11.4% and 5.5% respectively.

Asiana saw decreases in commodity type, such as chemicals and textiles. For the short-term Asiana will end its Penang cargo operation while looking to extend its cargo network through alliances with other airlines. Asiana hopes to increase carriage of mobile and UHD TV parts while also accommodating temperature-sensitive goods such as medicine and fresh food, although this is a strategy being followed by multiple airlines.

Asiana will mount a long-haul expansion

On the passenger side, Asiana will add one frequency to Istanbul (going to five weekly services), one to Paris CDG (also to be five weekly) and two weekly flights to Seattle (to offer a daily service). Limited charter service will be introduced to Barcelona. Growth in China is through new and expanded scheduled flights as well as charter flights.

However, the recent expansion of the Korea-China bilateral agreement achieved less than hoped for on Korea's side. In Southeast Asia Asiana is adding two weekly flights to Kalibo and three weekly flights to Hanoi. No growth projections have been given. Asiana has extended its partnership with Star partner Singapore Airlines to cover Asiana's Seoul-North America flights, but this is expected to deliver a small increase in passenger numbers.

Asiana in 1Q2014 took delivery of its first A380, which will help Asiana expand its long-haul presence. Asiana ended 1Q2014 with 72 aircraft. 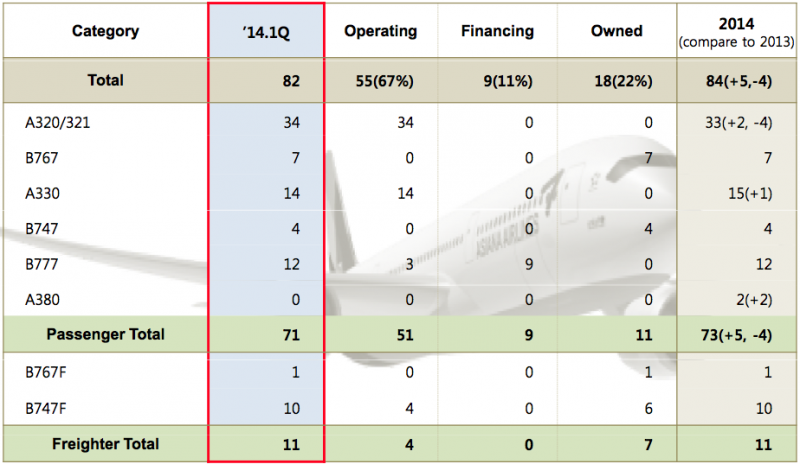 Capacity guidance is unclear, suggesting the situation could get worse before it gets better as North Asia-to-Southeast Asia competition increases while North America-Asia capacity expands ahead of demand.

Asiana has never been at the forefront of change, and having to play catch up will continue to create considerable challenges for the airline.