Asian stock markets snapped their losing streaks yesterday with some small gains. India's airlines did well, with Jet Airways (+7.1%), SpiceJet (+6.1%) and Kingfisher (+5.8%), making up some ground after days of heavy selling. China's airlines were also stronger.

Virgin Blue gave up 5.3%, after a strong rally in the past couple of weeks, while Malaysia Airlines (MAS) fell 3.6% as its move to drop domestic fuel surcharges met with a cool response from investors. HWANGDBS Vickers maintains its "fully valued" on MAS with a RM2 price target, while OSK Research reiterates a "neutral" rating with a RM3 price target. OSK Research stated MAS may continue to be on investors' radar screens, "given its impressive management track record and the swirling rumours which surfaced last month of a potential strategic alliance with Qantas".

Qantas shares rose 0.8% yesterday. ABN AMRO reiterated its "Hold" rating on the stock, updating its forecasts to include a lower oil price, but factoring in further capacity and yield reductions in the face of a tough second half. ABN AMRO forecasts a 1H09 profit of AUD222 million and prefers Qantas to Virgin Blue (Sell, AUD0.25 target price). The broker added, "the entry of Delta and V Australia on the trans-Pacific route should be challenging", and it has factored in yield declines as a result.

Overnight, US and European stock markets slumped by 3-5%, which could lead to some pressure on equity markets in Asia today. 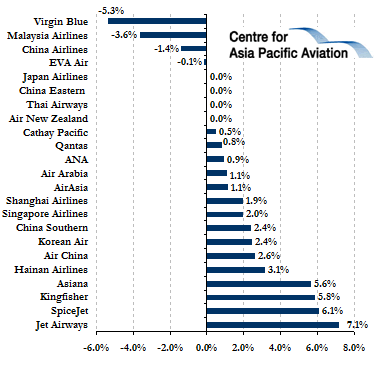