Asia Pacific air travel volumes are booming again, particularly at the pointy end of the aircraft, thanks to a better than expected economic performance by many of the region’s leading economies. China’s first quarter GDP surged 11.9% in the first quarter, to record the fastest annual growth rate since 2007. Singapore’s GDP soared 32.1% (yes, 32.1%) in the first quarter from the previous three months in annualised, adjusted terms, which exceeded even the most aggressive analyst forecasts by around 10 ppts. Premium demand in the region is closely following the expansion in economic activity, according to the latest report (for Feb-2010) from IATA. 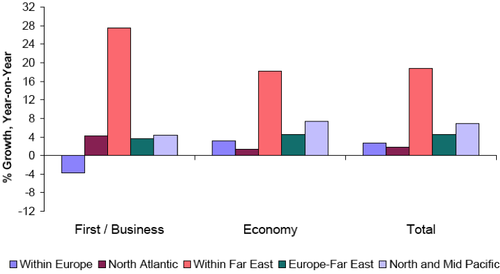 IATA noted, “it is clear that the recovery is two-speed, with very strong growth in the within Far East markets and sluggish growth elsewhere, with continuing decline in the within Europe premium markets. This reflects the very different economic environments in these markets”. In the US, for example, GDP growth of 5%+ in 4Q2009 “was mostly [inventory] stockbuilding”, which would have been very positive for air freight, but not air travel, according to IATA.

A “cyclical” reduction, but some deeper shifts occurring

Asia’s resurgence aside, IATA concluded that there is still some way to go before worldwide premium travel recovers previous highs, adding the recent decline “looks to have been cyclical and we are now moving into the upturn phase of the cycle”.

The industry body added, “back in early 2009, when the premium travel market had shrunk by around one quarter, the justifiable fear was that this was a structural, permanent loss. However, as world trade growth returned, so has premium travel”. 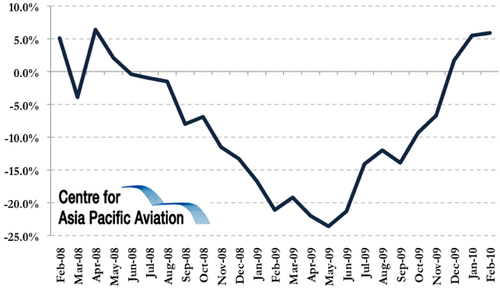 But revenues are lagging the upturn in passenger numbers, though higher load factors are now raising fares and yields, so revenues are improving, according to IATA. The industry body estimates premium revenues were up 9.4% in Feb-2010, but are still around 30% down on the size of the market in early 2008.

Asia is not the only market that is enjoying a renaissance. The Middle East’s share of total worldwide premium passengers and revenue exceeded 13% for the first time last month, having jumped above 12% at the onset of the global financial crisis.

Perhaps there are some structural changes occurring after all… 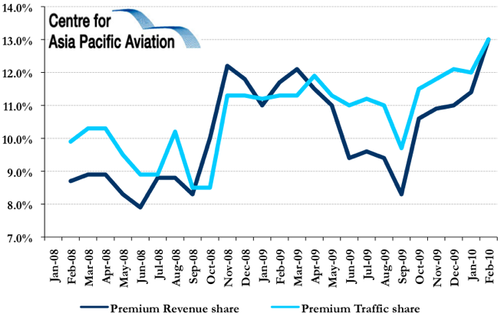