Low-cost carriers have two primary impacts: first  they stimulate new traffic and second they divert traffic from full-service counterparts. Some legacy airlines are adamant that LCCs will not impact their existing network and thus do not need to consider any response to LCCs. This is an old world argument often proved wrong; but even if it had merit it would not excuse legacy carriers from ignoring the opportunistic impact of LCCs: creating new growth.

LCCs are the sole or majority operator on 27% of short-haul capacity at Singapore Changi and 60% at Kuala Lumpur. This potential upside is no small sector to ignore.

One final argument from full-service airlines is that their strategy is to have a frequency advantage. But looking at markets like Singapore-Jakarta where LCCs do not account for the majority of capacity, they do account for the majority of frequencies. Asian growth is still in its infancy but for an indicator of the future could look to Europe, where the region's two biggest airlines are LCCs: Ryanair and easyJet. Moreover they are still growing, unlike their legacy counterparts.

In Singapore, LCCs have punched above their weight. LCCs are the sole operator(s) or comprise the majority of a route on 21% of Singapore's short-haul capacity (defined in this instance as 3908km, just above the Singapore-Perth route served by Jetstar and Tigerair). LCCs are the only operator(s) on 2.2% of Singapore's short-haul capacity. The relatively low figure reflects the lack of secondary cities in Singapore for LCCs to link to other secondary cities, a pairing that has become the staple of LCCs in Europe and the US.

(This is largely due to a well-known but frequently ignored fact that most Southeast Asian LCC flights are international - by contrast with the US and EU. As a consequence, many potential smaller city pairs are simply not permitted under bilateral agreements.)

The dominance of LCCs elsewhere on the short-haul network shows LCCs are not taking the scraps from full-service carriers but are competitors in their own right. They account for 62% of capacity between Singapore and Kuala Lumpur and 51% from Singapore to Bangkok (all airports), each key routes. They also have dominance on other city-pairings including to Cebu, Haikou, Ho Chi Minh, Kuching, Medan, Penang and Phuket.

They fall short on other routes, comprising 39% of capacity to Denpasar (Bali) and 44% to Jakarta. A number of full-service carriers are betting on having a high frequency that will translate to greater convenience that passengers will be willing to pay for. But frequency has limited application. LCCs comprise just over half of the frequencies between Singapore and Jakarta, half to Surabaya and just under half to Denpasar; their frequency share is higher than their seat capacity share, reflecting the widebodies used by full-service carriers like Singapore Airlines.

To Denpasar, Indonesia AirAsia has matched the frequency of the largest full-service operator, SIA. They both have 28 weekly flights. To Jakarta SIA has a frequency advantage with 71 weekly flights, more than the 57 from Garuda Indonesia or the 49 from the largest LCC on the route, Indonesia AirAsia. But with on average seven flights a day, the next service on Indonesia AirAsia is seldom more than two hours away. While a corporate traveller may have a more pressing schedule, the nearly ubiquitous one-way pricing at LCCs means a passenger could mix and match LCC services to better suit a schedule without any penalty from not taking a return fare. This opens up to the passenger the 152 weekly LCC frequencies – twice that of SIA.

Singapore-Jakarta has grown 45% in five years, exclusively from LCCs

The high growth of LCCs is best displayed by examining in detail a specific market. Singapore-Jakarta is Aug-2013's largest international route based on seat capacity originating in Southeast Asia. It is the third-largest route of both domestic and international routes, behind two domestic Indonesian routes: Jakarta-Surabya and Jakarta-Denpasar (Bali).

Since 2008 Singapore-Jakarta seat capacity has grown 45% based on OAG data. This growth is exclusively from LCCs: full-service capacity has shrunk 1.2% while LCC capacity has increased a staggering 229%, largely made possible as the Singapore-Indonesia bilateral has been expanded. 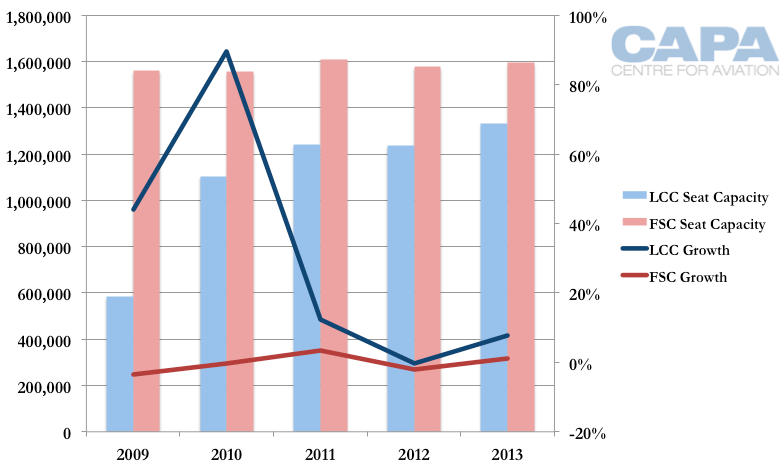 The full-service decline is largely due to fifth-freedom operators pulling off the route. In 2008 Air India, Emirates, Lufthansa, Philippine Airlines and Saudi Arabian Airlines regularly served the Singapore-Jakarta route; in 2013 none of them do.

While there has overall been a full-service decline, Singapore Airlines, the largest carrier by far of any type on the route, has increased its capacity by approximately 7%, but relative to the overall market's growth, this is still a pittance, reflecting the larger opportunities for LCCs than full-service carriers. Whereas in 2009 LCCs had less than half the capacity of full-service carriers, in 2013 they had almost as much and are on course to comprise the majority of capacity. 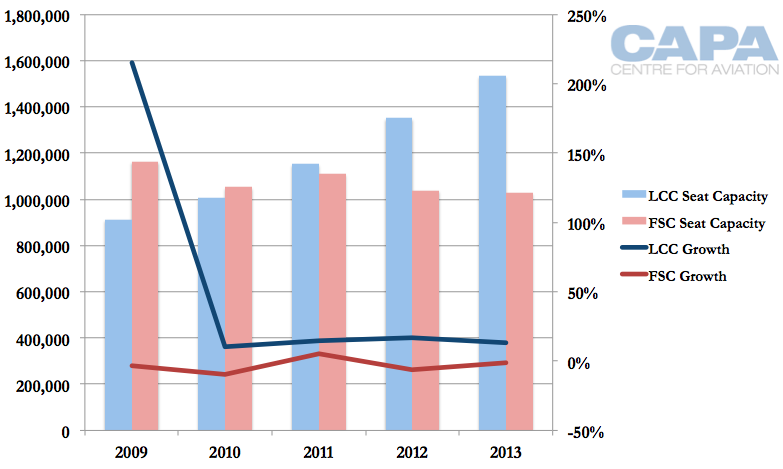 LCCs have made greater inroads in Malaysia with sustained growth

Whereas LCCs in Singapore were the sole or majority operator on 21% of its sub-3908km capacity, they account for 27% of capacity under 3000km, still leaving a wide gulf between their success in Malaysia and Singapore.

This point gives credence to the argument LCCs have been as successful due to their own strength as much as to the weakness of their home carrier; Singapore Airlines has been a more fit unit than Malaysia Airlines. This translates not just to efficiency that makes a full-service more competitive with a LCC, but also having the agility to pursue new destinations. 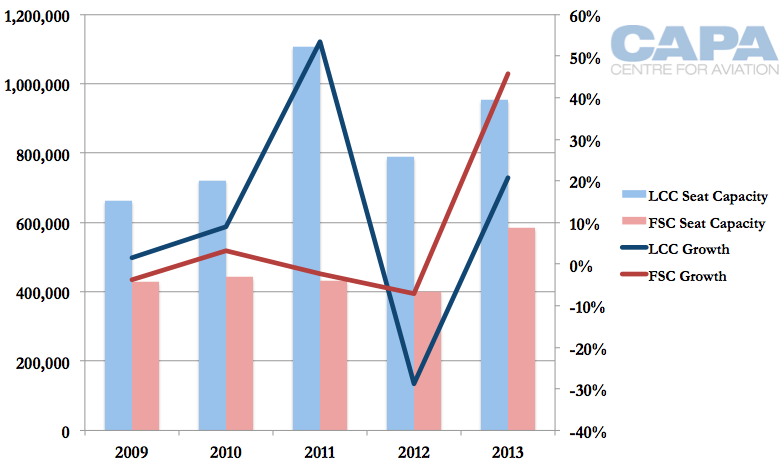 LCCs in Malaysia have had a more encouraging growth story than their full-service counterparts. Malaysia's largest domestic route, Kuala Lumpur-Kuching, illustrates this. LCC growth in 2009 and 2010 was higher than on full-service carriers. 2011 LCC growth dramatically increased with the entry of Firefly, which at the time was Malaysia Airlines' low-cost unit. Its time as a low-cost unit was short-lived, however, and it was re-positioned as a regional full-service carrier and withdrew from the Kuala Lumpur-Kuching route.

This saw the LCC growth rate hit negative numbers, but AirAsia – the only other LCC on the route – has consistently grown capacity. If ignoring Firefly, the LCC market would have posted a higher growth rate than in 2013, another one-off year.

Early 2013 saw the entry of Malindo Airways, the full-service Malaysian unit of Indonesia's Lion Air (Lion Air is a LCC but also has an Indonesian full-service unit, Batik Air). This caused full-service capacity to dramatically increase. Malindo is still a young carrier and its strategy unproven, so it is not yet clear if there may be a higher full-service growth rate on routes Malindo enters or if this will be a limited spike if the carrier withdraws or reduces capacity.

Without Malindo, the full-service sector on the Kuala Lumpur-Kuching route would be mild: while AirAsia has increased its capacity by 46% on the route between 2008 and 2013, Malaysia Airlines has grown 24%, but this is largely due to a response to Malindo: Malaysia Airlines' growth from 2008 to 2012 was down 10%.

Looking at Malaysia's largest international route, Kuala Lumpur-Jakarta, LCCs have grown faster than their full-service counterparts and in 2012 LCCs for the first time had more capacity than full-service carriers. 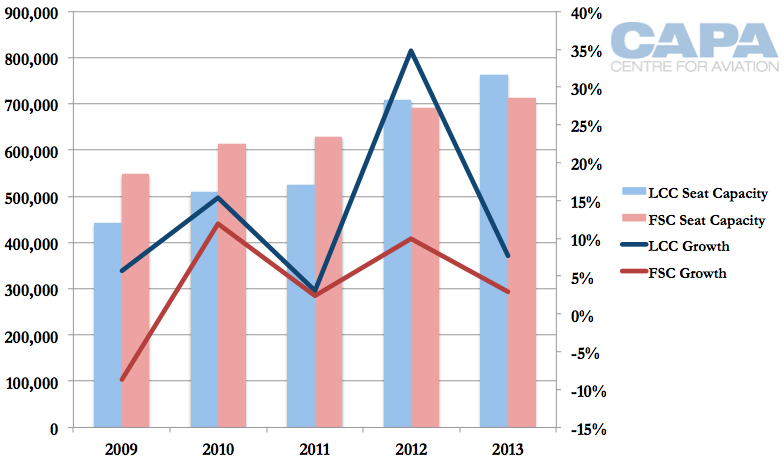 Thailand's LCC performance is closer to Singapore's than Malaysia's

The performance of LCCs in Thailand is more similar to LCCs in Singapore than Malaysia: a single LCC is the operator on 4% of Thailand's short-haul (sub-3000km) ASKs, while multiple LCCs account for 6% of short-haul capacity. LCCs account for all or the majority of 21% of Thailand's short-haul capacity. But a number of routes to/from/within Thailand are close to having the majority of capacity come from LCCs and within a few years likely will be controlled by LCCs.

Bangkok-Kuala Lumpur sees 43% of capacity from LCCs (there is notable fifth-freedom capacity from Egyptair, Ethiopian Airlines, Lufthansa and Royal Jordanian). This route alone comprises about 4% of Thailand's capacity. 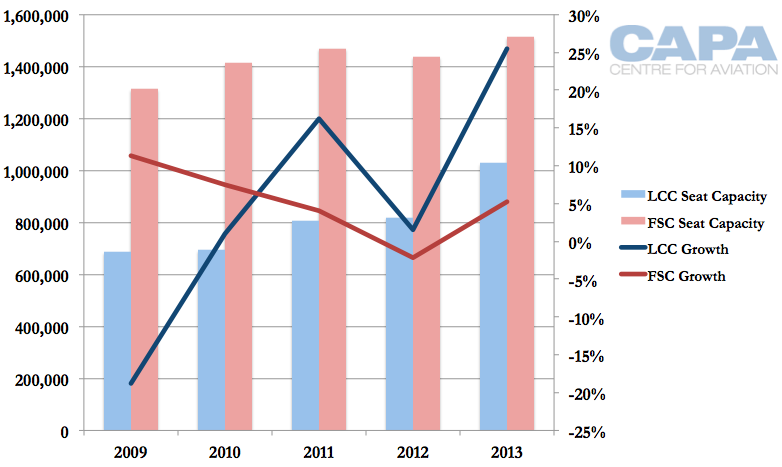 Thailand's largest domestic city-pair, Bangkok-Phuket, has shown swings like Kuala Lumpur-Kuching, but in this scenario the cause of the negative LCC growth in 2009 is due to significant capacity reductions from Nok Air and One Two Go. Nok Air has since re-built its capacity levels while One Two Go has exited the market. 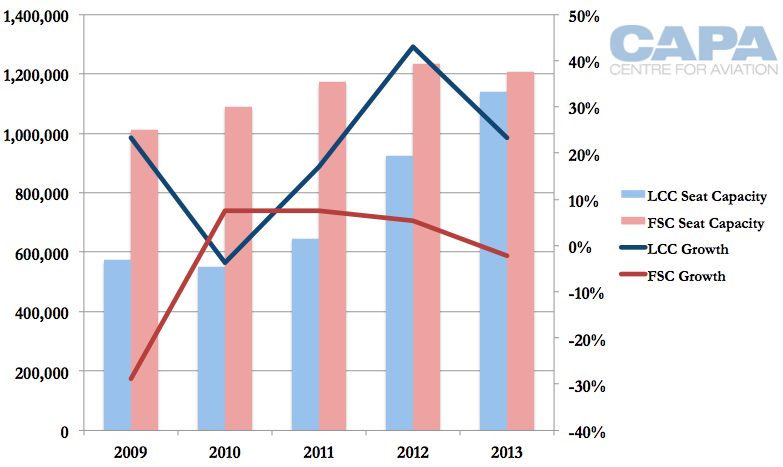 LCCs have the power to unlock traffic growth

The impact of LCCs cannot be understated, despite some legacy carriers still arguing against LCCs, a strategy perhaps driven less by facts than ability to deal with a changing world.

Genuine LCCs generally rank anywhere between competitive and overpowering when paired against a full-service carrier. This has been the clear lesson from Europe, where short haul services have become the preserve of low price operations. There are differences in Asia, for example the longer average stage lengths of LCC operations and the frequent use of widebody services on these routes by full service airlines. But here too changes are occurring, as longhaul LCCs adopt widebody operations with A330s and 777s - and will at first be the major users of 787s and A350s as those fuel efficient aircraft are delivered.

The argument that full service airlines in Asia have advantages that their European equivalents do not have - and are therefore not similarly threatened - is almost certainly fallacious.

But even if partly correct, this still ignores the even more important aspect of LCCs, especially in the Asian context: the opportunity for exceptional growth.