Amid the gloomy international airline industry financial outlook released this month by the International Air Transport Association (IATA) came some optimism that traffic growth in the Asia Pacific region should recover somewhat next year. Overall, the airline industry is however heading into a period of over-supply, and airline load factors (and yields) will fall as a result, putting further pressure on the industry bottom line.

Worldwide domestic/international traffic (passenger and cargo combined) is expected to grow just 2.9% in 2009 (down from a previous forecast of 4.5%) on the back of 2.2% growth in capacity. This indicates IATA expects the world's airlines will try to maintain load factors in the increasingly tough economic environment. 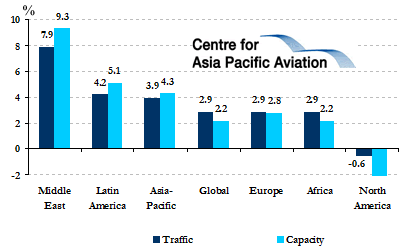 The Asia Pacific is one of just two regions (with Africa) that are expected to report a better domestic/international traffic and capacity performance in 2009 than 2008.

This year has been extremely challenging for the region's leading growth markets, China and India, and overall regional traffic is expected to ease up from 3.3% in 2008 to 3.9% over 2009.

But much of the traffic growth could be capacity led (leading to rising pressure on earnings), as the region's airlines take delivery of large numbers of aircraft over the next 18 months. Load factors are tipped to fall, as Asia Pacific airlines grow their capacity by 4.1% this year and 4.3% next. 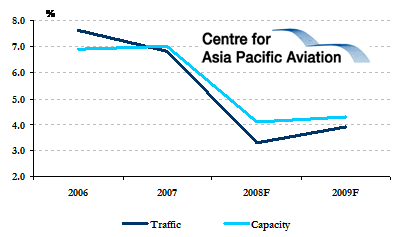 Meanwhile, the days of double-digit passenger and capacity growth are expected to come to an end for Middle East carriers in 2009, with traffic expected to slow from 15.1% in 2007 to 10.8% this year and 7.9% in 2009. Capacity expansion is expected to ease from 10.9% in 2008 to 9.3% next year, despite deliveries of up to five widebody aircraft per month to regional leaders, Emirates, Qatar Airways and Etihad Airways, collectively. 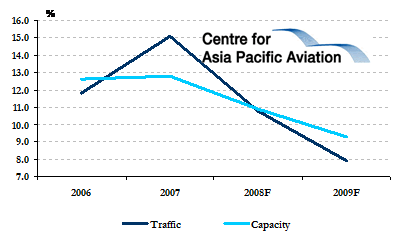 But the bottom line of these changes is that strong capacity growth in both regions will accelerate the shift in the balance of power in global aviation towards Asia Pacific and the Middle East in 2009. Whether it will be profitable is a different equation.