The Australia-based Macquarie Airports (MAp) released its financial report for the three and six month periods ending 30-Jun-09. Once again, Sydney continues to outperform the other airports in the stable, which are spread across four continents. With the UK’s Bristol Airport seemingly available for sale if and when economic conditions improve, indeterminate prospects for the European mainland airports, a strategic withdrawal from Japan and Mexican airport prospects at the mercy of pestilence and destructive weather elements on a Biblical scale, is it now time for MAp to retrench to its Australian base?

Source: Centre for Asia Pacific Aviation & MAp
All based on the conversion rate at USD1 = AUD1.21

In a company statement, MAp said, “the Boards and management of MAp believes the long term growth prospects for the aviation industry and for MAp’s airports remain strong. Early signs of traffic recovery are evident but European traffic is still expected to show a full year decline.”

Sydney accounts for some 50% of MAp’s business

In fact, MAp, operating in North Asia, Europe and Latin America as well as Australia, is in many ways a microcosm and barometer of how the global airports business is handling the current crisis. In its home territory, where Sydney Airport accounts for 50% or more of its total business (and particularly its profitability), the economy remains comparatively strong, as it does to a lesser degree in Canada compared to the US. One glance at the tables above shows how the only positives (+) in any of the measures used are at Sydney.

Of MAp’s other invested airports, Copenhagen and Brussels, both of which handle a mix of legacy and LCC traffic but which are oriented more towards the former while their respective LCC terminals are competed and brought into operation, passenger losses are about average for Europe. Bristol’s performance is worse. The regional airport appears to have been overdeveloped and it is hardly surprising that the City Council has formally objected to the airport’s GBP150 million expansion plans, claiming the expansion would lead to further noise pollution at night, traffic pollution and the ubiquitous “climate change”. The plans include an expanded terminal, car parks and a new runway apron, to cater for “increasing passenger traffic” that is difficult to discern when traffic was down by over 14% in 2Q09.

Bristol to go but losing value all the time

Neither is it a surprise that MAp has already let it be known that it would be content to sell Bristol Airport. It was valued at around GBP285 million at the height of the boom in 2006 but would be worth considerably less now. 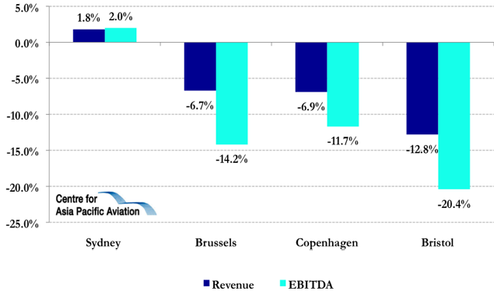 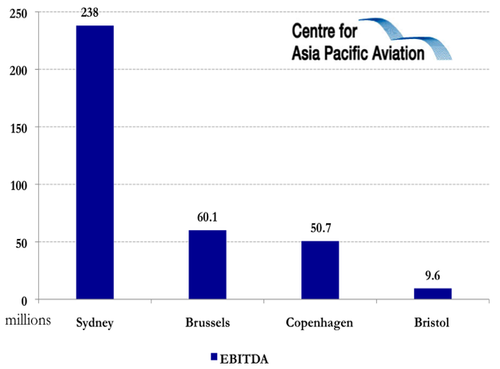 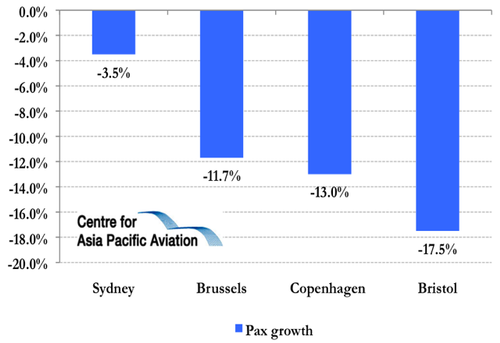 Of the other two MAp locations, ASUR, the Mexican operator, continues to be affected adversely by the Swine Flu outbreak as the original source, even though it is moderating in other parts of the world. Passenger numbers were down by 26.8% in 2Q09, almost twice the amount for the first half of the year, and consequently revenues and EBITDA followed suit.

MAp is relatively new to Latin America, a region that has proved to be a thorn in the side for other operators past and present such as TBI, Unique (Flughafen Zurich) and Inter Airports (San Francisco Airport).

Japan has also been badly affected by Swine Flu as well as a deteriorating economy. JAL, a big user of MAp’s invested Japan Air Terminal, made a massive (re-stated) USD1 billion operating loss in 2Q09 and is making “drastic adjustments” to its network and fleet size in the second half of 2009 and beyond, including the possibility of separating low-margin international routes into a new company or transferring them to lower cost subsidiary, JALways. It is by no means certain that Japan’s new government will continue with JAL’s restructuring, especially where bailouts are concerned. JAL really needs certainty right now. At least ANA is faring a little better and it is focused on building its business at Tokyo Haneda Airport where Japan Airport Terminal Co (JAT) is the operator of terminal buildings.

In 2Q09 JAT’s operating profit was reduced by 84% and its net profit by 90% as revenues tumbled by 15.3%. Even though JAT’s forecasts for the six months to 30-Sep-09 are more positive it is again scarcely a surprise that, at the end of Jul-09, Macquarie Group stated it had offered to withdraw investment from JAT at Haneda Airport. Japan Airport Terminal will acquire all offered shares for about JPY20.06 billion. The Macquarie Group, through its International Infrastructure Holdings B V unit, was Japan Airport Terminal's largest shareholder. In addition to constructing and managing passenger terminal facilities at Haneda and associated concession facilities, the company also operates commissioned duty-free shops and is involved in the wholesale of duty-free goods at Narita International Airport, Kansai International Airport, and Central Japan International Airport.

Macquarie Group's acquisition of a near 20% stake in Japan Airport Terminal was controversial, prompting the Japanese transport ministry to consider restrictions on large investment by foreign companies in Japanese airport operators for “national security” reasons. It came ahead of the proposed privatisation of Tokyo’s Narita Airport.

The new Japanese government has so far made no formal pronouncement on the proposed privatisation of Narita. Legislation to permit an IPO had been prepared for debate by the Diet, but the last parliamentary session ran out of time. It is possible it will be debated in the next parliamentary session. If so, it could become law by the end of the current financial year, 31-Mar-10. This would position Narita for an IPO later in the next financial year. However, the current downturn is having its effect and a combination of a smaller JAL – almost inevitable – and reduced landing charges is likely to see Narita trading in negative territory, a feature that might prompt a further delay even if it is still viewed as a potential goldmine in some quarters.

The withdrawal offer by Macquarie Group from Japan Air Terminal followed a decision that it would sever ties with MAp. Consequently, MAp bought management rights of the company for USD281 million Macquarie Group's 'satellite' businesses have been selling assets to pare debt after values tumbled.

Financial wheeler-dealing apart, the bigger picture as far as Japan is concerned is whether MAp would want to retain in presence in Japan at all if it were to be limited to a small, minority holding of any airport and where it could not exert its influence. To a lesser degree that is what happened at both the Rome and Birmingham (UK) airports and now MAp looks set to exit Bristol. Having reduced its financial commitments at the Brussels and Copenhagen airports in 2008, after which it stated it would not pursue any more deals for the time being at least and promptly withdrew from the Chicago Midway lease bid proceeding, and having lumbered itself with airports in Mexico where if the pig flu doesn’t get you a hurricane probably will, MAp management could not be blamed for considering of a policy of ‘come home’ to Australia.