Asia-Pacific start-ups push ahead with launch plans, despite COVID-19

The COVID-19 pandemic has sent many airlines spinning into financial ruin, and some will not survive the industry’s largest crisis.

However, there are still a handful of Asia-Pacific start-up airlines that are defying the bleak environment and persevering with plans to launch operations.

In Hong Kong, Vietnam, South Korea and Pakistan, new airlines are pushing ahead with their market entrances. In most cases the pandemic has delayed their plans, either due to disruptions to their own preparations, slower regulatory approvals, or changes to aircraft delivery schedules.

There is no doubt they are entering service during extremely challenging market conditions. However, they do have some advantages.

Aircraft are much cheaper to obtain now, and the airlines can start at a scale that suits the depressed demand – which is a luxury the incumbents do not have, with their fleets that were designed to suit the pre-pandemic world. Competition will also be less fierce for the immediate future, giving the start-ups some breathing room to establish a foothold.

Hong Kong-based Greater Bay Airlines (GBA) intends to begin operations this year, although the specific timeline remains uncertain because the airline has yet to gain its AOC.

The LCC plans to start with three leased Boeing 737s, according to the South China Morning Post. However, it has ambitious plans to expand to up to 30 aircraft by 2025.

Recent consolidation in the Hong Kong airline market presents an opportunity for a new player. Cathay Dragon has ceased operations and merged with its parent Cathay Pacific, and the LCC Hong Kong Express was bought by Cathay in 2019.

GBA would present another alternative to the Cathay Group in this market, alongside the struggling Hong Kong Airlines.

Market share ranking for Hong Kong for week of 20-Jan-2020, as measured in weekly seats

The scope of GBA’s ambitions was signalled when the airline applied to Hong Kong’s Air Transport Licensing Authority for the right to operate more than 100 international air routes. About half were for routes to Chinese mainland cities, and the remainder were for destinations in other Asian countries, including Japan, Korea, Taiwan, Vietnam, the Philippines and Singapore.

The route rights GBA applied for are generally those relinquished by Cathay Dragon after it closed down.

Vietravel is the latest to tap into strong domestic market

The airline was established by the major tourism operator Vietravel, which has an extensive network of offices in Vietnam. The parent invested VND700 billion (USD30.4 million) to start the airline. The links to the tourism operator will certainly help Vietravel Airlines penetrate what has become a crowded leisure sector.

Vietravel Airlines' initial routes will be domestic, tapping into the internal leisure market that has rebounded well, since most international flights into Vietnam remain suspended due to COVID-19. However, the airline eventually intends to add international destinations in Southeast and Northeast Asia.

The airline is starting with three Airbus A321ceos, which have all been delivered.

Vietravel will be looking to emulate the success of Bamboo Airways, a hybrid airline that launched operations in Vietnam in Jan-2019. That airline has grown quickly, now having a fleet of 19 Airbus narrowbodies and three Boeing 787-9s.

Not all Vietnamese start-ups have succeeded, however. The real estate conglomerate Vingroup planned to launch Vinpearl Air in mid-2020, but cancelled the plan in Jan-2020.

Vietnam: domestic market share for week of 25-Jan-2021, as measured in weekly seats 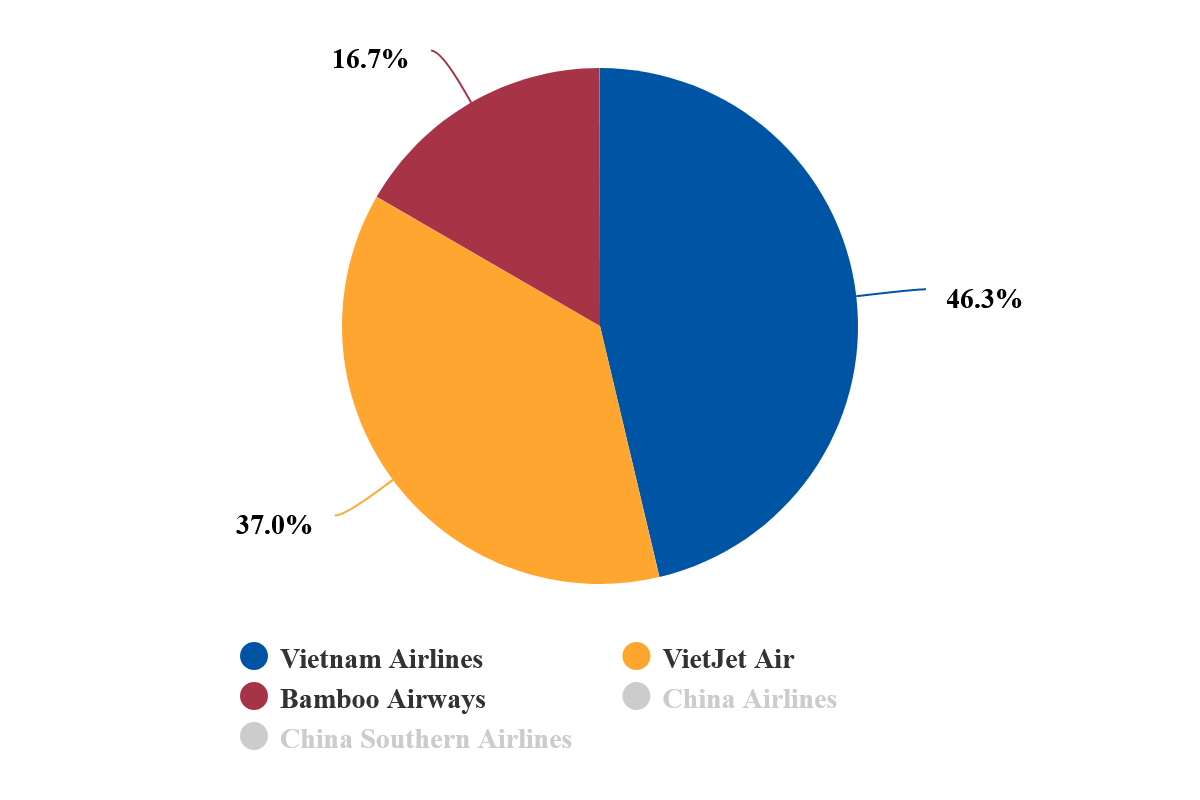 Air Premia charts a different course as a widebody start-up

Air Premia is a South Korean hybrid airline that intends to launch operations this year, and it is one of the few to be targeting long haul routes with widebody aircraft. It expects to receive its AOC and its first aircraft in Feb-2021, according to local media reports.

The airline will be based at Seoul Incheon International Airport. It plans to fly initially to destinations in Asia, before expanding to US routes such as Los Angeles and San Jose. The airline is due to receive three leased Boeing 787-9s, and has previously said that it intends to order another five of these aircraft.

Air Premia was one of three start-ups that the South Korean government approved in 2019, along with Fly Gangwon and Aero K.

Fly Gangwon is the only one of the three to have launched so far. Air Premia had previously planned to begin flying in the second half of 2020.

The airline will to some extent distinguish itself from the LCC fray in South Korea because it will compete with a slightly different model and network. It has certainly gained the attention of Korean Air with its goal of entering the US west coast market, which is very important to the larger airline.

The South Korean LCC Aero K plans to launch its first flight on 19-Feb-2021, after many years of attempting to start operations. Gaining the necessary authorizations has taken longer than expected, and more recently the coronavirus pandemic has disrupted the start-up’s plans. The airline was granted an operating licence in 2019, and finally gained its AOC in Dec-2020.

Aero K will begin with domestic operations, with its first route between its Cheongju base and the popular leisure resort of Jeju. It will use a leased Airbus A320ceo, and it has plans to add more of these aircraft. Aero K also intends to develop new facilities at Cheongju Airport.

Cheongju is located in central South Korea, close enough to Seoul to draw traffic from southern parts of its metropolitan area as an alternative to Incheon International Airport. Cheongju also serves important high-tech and biomedical industry centres and is the closest airport to Korea’s administrative capital Sejong City.

South Korea already has a crowded LCC sector, but consolidation is likely to occur. Korean Air is in the process of acquiring its rival Asiana, and is expected to merge their LCC subsidiaries. Meanwhile, the LCC Eastar Jet has ceased operations and is searching for new investors to allow it to relaunch.

Pakistan’s Air Sial operated its first scheduled flight on 25-Dec-2020, and in 2021 it is expanding its routes and frequencies.

The airline is backed by the Sialkot Chamber of Commerce, with the goal of increasing services from that city to Pakistan’s largest centre, Karachi. However, the new airline also operates domestic routes between Karachi and other major cities, which improves the airline’s viability.

Air Sial has taken delivery of three leased Airbus A320s, which it will use for its four initial routes. It started with Karachi-Islamabad, added Karachi-Lahore in Jan-2021, and plans to start Sialkot-Karachi and Karachi-Peshawar in Feb-2021. The three non-Sialkot services are the busiest domestic routes in Pakistan, according to data from CAPA and OAG.

The airline has quickly secured a significant domestic market share. It accounted for 13.7% of domestic seats for the week of 25-Jan-2021.

Pakistan: domestic market share for the week of 25-Jan-2021, as measured in weekly seats 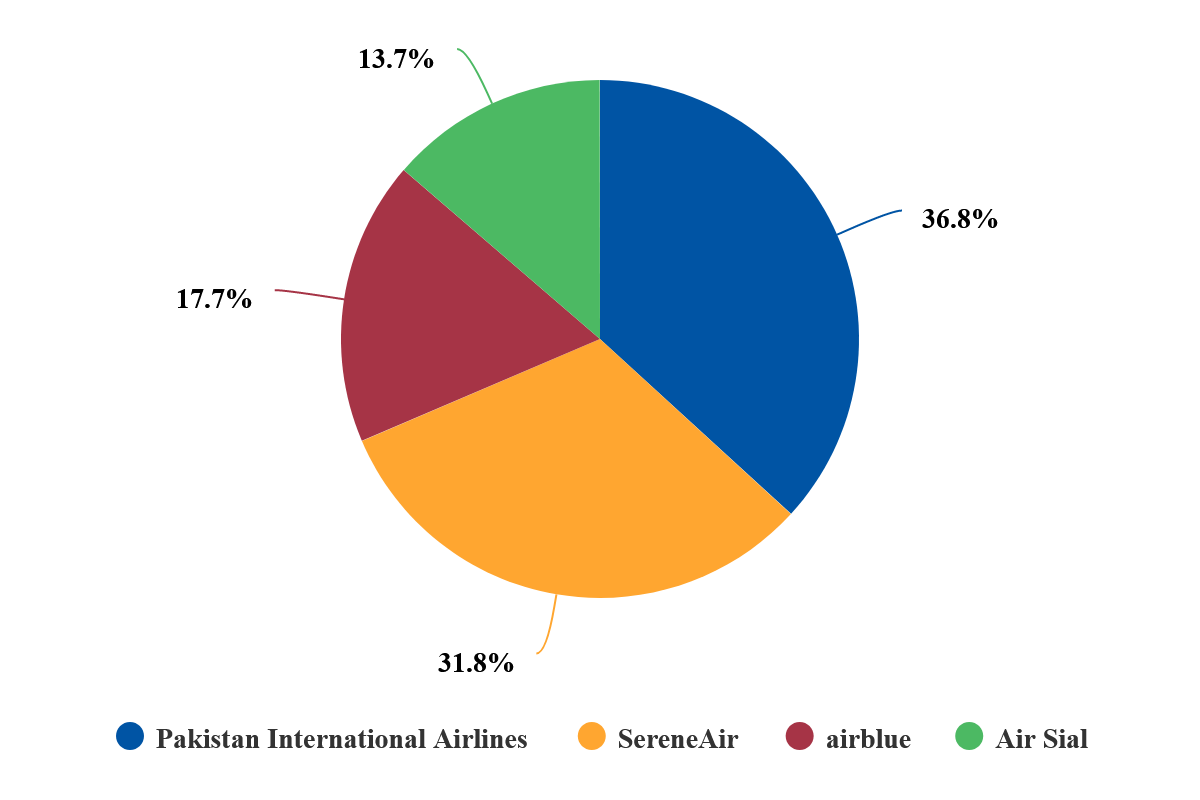 Start-ups have some advantages, but caution remains the watchword

These Asia-Pacific new entrants are starting small, and mostly using narrowbodies – both sensible choices in the current market environment. Start-up airlines usually highlight their aggressive growth plans, but the latest crop of fledgling airlines will have to scale back their expectations significantly.

One major factor is that the start-ups will not be at the mercy of larger incumbents as they usually would be, due to the weakened condition of the established players. Also, some of the existing airlines have shrunk, merged, or even closed down, leaving market openings.

The new airlines have the benefit of choosing the size, network and fleet they will start with, and they do not have the headaches of having dozens of aircraft sitting on the ground as their rivals do.

As long as they are careful regarding growth plans, this could turn out to be an advantageous time to enter the market.