Asia Pacific airlines witnessed some “moderation” in passenger and air cargo demand growth in the first two months of 2011, according to the Association of Asia Pacific Airlines (AAPA). The industry body warned that despite a positive start to 2011, the outlook for the industry is “clouded” by a sharp increase in oil prices and the situation in Japan which has the potential to “undermine the global economic recovery”.

This statement is a marked contrast to comments from AAPA just last month. When commenting on Jan-2011 traffic, AAPA noted the region’s carriers were “projecting further growth in aviation markets this year, with the introduction of new services and frequencies in the coming months”. AAPA, however, also foreshadowed fuel concerns at the time, noting that “sharply higher oil prices are already pushing up the cost of air travel and adding to uncertainties over the outlook for continued growth in the global economy.” 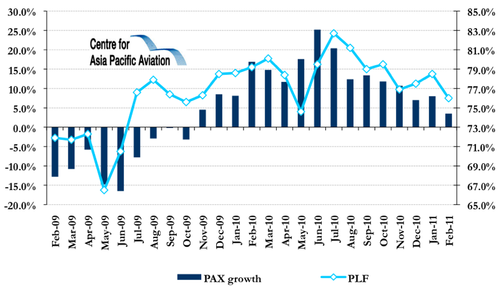 International passenger traffic (RPKs) increased by 2.8% in Jan-2011 with capacity (ASKs) increasing at a faster pace, by 6.9%. This marks the third consecutive month when capacity exceeded traffic growth. Dec-2010 marked the first month since Aug-2008 that capacity grew at a faster pace than traffic. 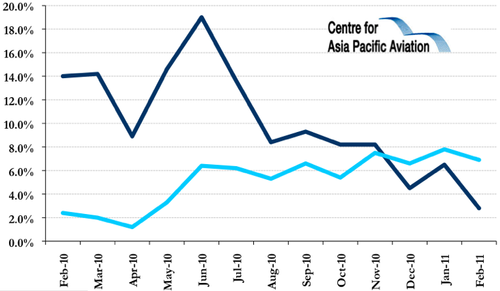 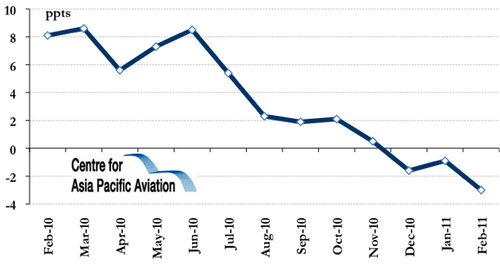 AAPA members' international air cargo demand (FTKs) decreased by 4.2% in Feb-2011 marking the first month of contraction since Oct-2009 when cargo traffic declined by 2.4%. The decline in cargo demand follows a very sharp rebound in freight volumes in 2010. 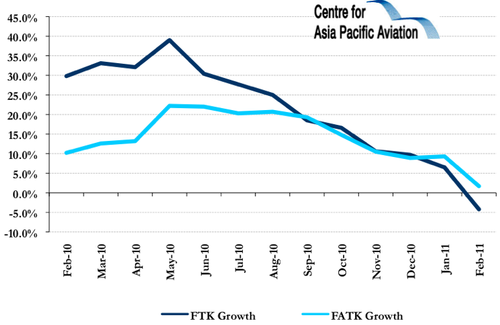 Cargo capacity increased 1.7% in the month, resulting in a 4 ppts decline in average international cargo load factor to 69.7%.  Again, this marks the third consecutive month of declines. Freight load factors improved in every month of 2010 with the exception of Sep-2010. 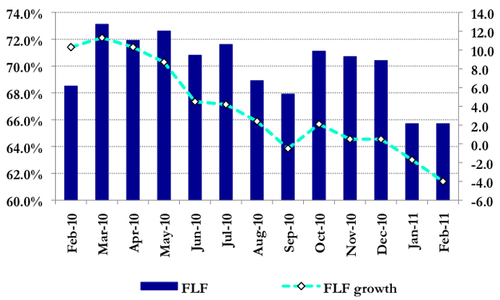