Rapid LCC expansion and the introduction of premium economy at full service airlines have dramatically changed the corporate travel landscape in Asia Pacific. The increasing use of LCCs and premium economy products by corporate buyers will be addressed at the CAPA-ACTE Global Summit and Corporate Lodging Forum in Sydney on 3/4-Dec-2018.

Corporate travel buyers in the region are slowly starting to embrace LCCs for short haul and, in some cases, even long haul travel. With LCCs dominating some Asian markets and often offering the best schedules, it was inevitable they would start to gain traction in the corporate space.

Corporate buyers in some Asia Pacific markets, such as Australia and New Zealand, have embraced premium economy for several years. However, with the introduction of premium economy products by more airlines in recent years there are now premium economy options in more markets, giving corporates the opportunity to review their travel policies.

These issues will be discussed in detail in a corporate travel stream at CAPA's Asia Aviation Summit at Singapore's Capella on 8/9-Nov-2018.

The CAPA-ACTE Global Summit and Corporate Travel Forum in Sydney on 3/4-Dec-2018 will also address key corporate travel agenda items such as this.

Corporate buyers have historically been resistant to using LCCs, due primarily to product and service issues. However, more and more LCCs in Asia Pacific have become more corporate-friendly, providing product bundles that appeal to corporate buyers and passengers.

Even LCCs that have not introduced products for the corporate segment are sometimes selected for convenience. A direct LCC service at the right time beats a connecting FSC service that can add several hours to a journey.

LCC market share in Asia Pacific will continue to grow

LCCs in Asia Pacific are expected to continue to expand their market share over the next several years, given their massive aircraft order books. LCCs from Asia Pacific currently have 2,400 aircraft on order compared to 2,000 for full service airlines, according to the CAPA Fleet Database.

Unlike in some short haul markets, there are still plenty of full service options in almost all medium and long haul markets. However, most widebody LCCs offer a premium product, providing a cost effective option for corporate buyers.

The premium products on Asia Pacific LCCs are limited to widebody aircraft; there are not yet any premium narrowbody LCC products in Asia Pacific, even as longer narrowbody routes are introduced using new generation aircraft.

Over the next year Air Tahiti Nui is replacing its fleet of five two-class A340-300s (angled flat business class and regular economy) with four three-class 787-9s (lie-flat business class, premium economy and regular economy). The first aircraft has already been delivered and will be put into service on the Papeete-Auckland route in early Nov-2018.

Asia Pacific FSCs with premium economy products: as of Nov-2018 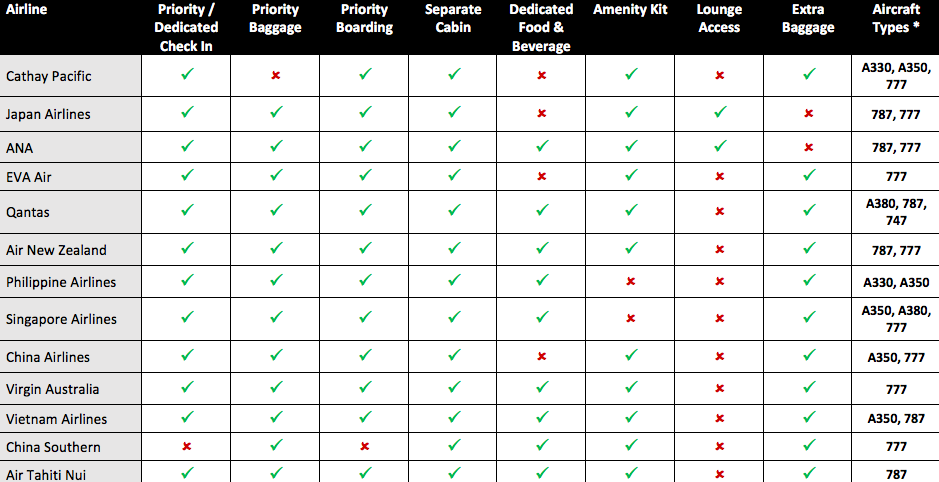 There are large differences in product, but all the airlines in this list above provide a separate premium economy seat. Airlines that offer an extra legroom product using regular economy seats are excluded.

As mentioned previously in this report, some Asia Pacific LCCs also now offer premium economy type seats on their widebody fleets. This includes Jetstar, Jin Air, NokScoot, Scoot and Thai Lion Air. The AirAsia X Group, which has the largest widebody LCC fleet in Asia, is an exception as it has lie-flat seats that are more like business class but it provides a basic service.

US and Gulf airlines start to join the trend

Corporate buyers in Asia Pacific also now have an increasing number of premium economy options from airlines outside the region.

US airlines in particular have been recent adopters, with American, Delta and most recently United starting to roll out premium economy, including on their services to Asia Pacific. Air Canada began introducing premium economy in 2013 and now has the product on its Asia Pacific routes.

Emirates unveiled plans earlier this year to introduce premium economy on its A380 fleet from 2020. Emirates will become the first Gulf airline with the product – and will likely not be the last.

As Emirates deploys A380s on several routes to Asia Pacific, corporate buyers in this region will gain even more premium economy options. Emirates' decision to join the premium economy trend is perhaps the strongest indication that premium economy has become a mainstream product that corporates want – and often even require in selecting airlines.

A major turning point for premium economy came earlier this decade when Cathay Pacific, and then Singapore Airlines (SIA), decided to introduce the product on their long haul fleets. Both airlines had studied premium economy for years before taking the plunge, realising that too many corporates in too many of their key markets had started to include premium economy in their travel policies.

Cathay began rolling out premium economy in 2012. SIA started in 2H2015 and is now finally almost at a point where all its long haul aircraft have premium economy.

Airlines are always concerned about cannibalising business class. However, without a premium economy product an airline risks losing traffic to competitors that have the product, given that an increasing number of corporates now have policies authorising employees to travel in premium economy but not in business class.

Data from CWT and Travelport indicate that SIA made the right call. A study conducted by CWT and Travelport earlier this year concluded that the business class portion of business traveller or corporate bookings in Singapore did not drop from 2015 to 2017, despite the rollout of premium economy on SIA. Instead, the economy class portion of total bookings decreased, from 60% in 2015 to 54% in 2017, as the portion of premium economy bookings increased from 1% to 7%.

The Singapore corporate market has clearly evolved in the past few years and is now fully embracing premium economy.

Singapore corporates are also starting to embrace LCCs for short haul travel. LCCs account for approximately 50% of capacity from Singapore to other Southeast Asian countries and do not have any full service competitors on many routes. Singapore’s two local LCCs, Scoot and Jetstar Asia, have evolved and are now offering products for the corporate sector.

A similar evolution in other Asia Pacific markets such as Australia started earlier and continues today. Other markets inevitably will follow. The increasing use of LCCs and premium economy by corporate travel buyers in Asia Pacific is an irreversible trend.