Asia-Europe, which is one of IATA's big four international markets, has become the slowest-growing. The market underwent RPK expansion of only 1.5% in Jul-2016, the latest data available. Uncertainty in Europe and terrorism fears mean that some Asian travellers choose Australia and North America or, as IATA has flagged – travel within Asia, which has expanded by nearly double digits.

Although market expansion was slow in the first part of 2016, so too was capacity. Yet this changed in Jul-2016 as capacity increased more quickly, perhaps as airlines expected a stronger summer. Despite slow passenger growth, dynamics are highly varied – except for yield declines. The combined RPK growth of IAG (7.2%) Cathay Pacific (3.7%) and Finnair (8.7%) was not enough to offset the contraction of the largest airline in the market, AF-KLM (7.9%).

From the reported geographic data by all major airlines, load factors are falling.

Perhaps most worryingly, Singapore Airlines has experienced a sharp decline in European load factors, including an 8.0ppt drop in Aug-2016, despite flat capacity. SIA's European load factors are the lowest in nearly a decade. Projected forward capacity continues moderately strong, or in the case of Chinese airlines, very strong. There will need to be capacity adjustments or acceptance of further yield/load factor declines. 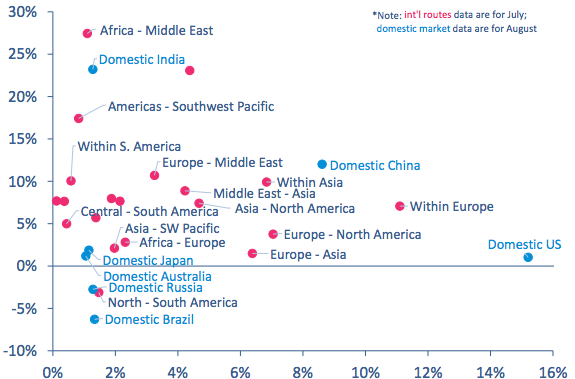 Capacity increased from Jul-2016 as market continued to show weakness

IATA's finding of a 1.5% increase in RPKs in Jul-2016 is concerning, from the perspective of capacity. The low traffic growth observed in prior months is also a worry, but appears to have been relatively consistent with capacity growth: the Europe-Northeast/Southeast Asia market grew 1.8% from Mar-2016 to Jun-2016, according to capacity data from OAG. 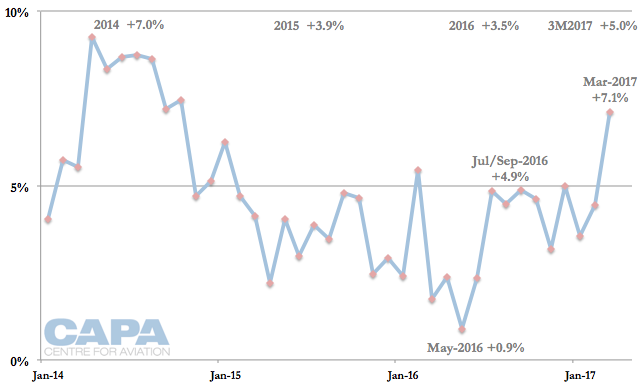 Airlines may have been optimistic that typical high summer demand (with increased growth) would return. However, Asian passengers maintained conservatism and favoured other markets. IATA's opinion is that this fuelled high intra-Asia growth (high single digits approaching double digits).

As CAPA has previously stated, Asian airlines are reporting stronger performance to North America and Australia, indicating some passengers with long haul appetite are still pursuing long haul travel, but to other markets.

A factor not to be overlooked, but difficult to quantify with public data, is that some new routes were ambitious to begin with and would have been difficult to sell. A number of Chinese airlines are adding secondary routes that are challenging to fill initially. China Eastern is representative of this: it launched four European routes in a single week in Jun-2016, including 777-300ERs to Amsterdam and Madrid, delivering large capacity to small O&D markets.

Year-on-year growth percentage changes need to be qualified by the usual disclaimer that they reflect the situation in the previous year. Forward capacity planned for Mar-2017 indicates 7.1% growth – the highest since 7.4% in Oct-2014.

However this is impacted by Mar-2016 having been quiet, thus exaggerating the longer term growth trend.

Yet looking at the net additional number of seats injected into the Asia-Europe market, there is some correlation with growth percentages. Growth percentages show northern summer 2016 expansion being comparable with, or below, recent peaks in late 2015/early 2016. Yet in terms of net seats, there is a monthly increase of seats in Jul-2016 through Oct-2016 that has not been observed since Jan-2015.

This will continue in Dec-2016 (perhaps airlines are optimistic of a winter holiday peak).

In Mar-2017 there will be the most capacity injected since Oct-2014. However it should be cautioned that these are plans and there is still ample time for airlines to adjust downward (and Mar-2016's capacity addition was the second lowest in three years). So an optimistic Mar-2017 also reflects what was a very cautious Mar-2016. 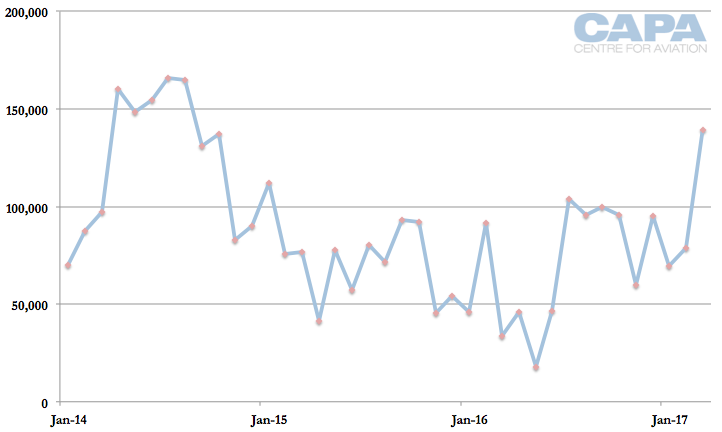 From Jun-2016 to Aug-2016 the Europe-Northeast/Southeast Asia market experienced a capacity increase of 3.9%. This varied widely among airlines when the largest airlines from each market that report geographical traffic results are considered (one of the largest, Air China, does not report them, and Singapore Airlines reports only load factors and is examined in the section below).

Air France-KLM and Lufthansa cut capacity, including a rather dramatic 7% cut by AF-KLM (although some allowance to be made for retrofit works that result in a reduction in seating density). Despite the increase, load factors fell for both (0.9ppt for AF-KLM, 1.7ppt for Lufthansa). IAG grew 9.3%, reflecting BA's growth but also the entry of Iberia. Load factor fell 1.7ppt (IAG figures include Australia, which BA only serves once daily).

Finnair was the fastest-growing major airline of the airlines that report geographic traffic. Its 13.2% increase in ASKs was not absorbed; RPKs grew 8.7% and Finnair's load factor fell 3.6ppt.

Cathay Pacific similarly struggled to have capacity absorbed: ASKs grew 8.4% but RPKs expanded 3.7%, leading to a 4.1ppt drop in load factor. Despite the large fall in load factor, Cathay's load factor was the second highest: 89.6%. AF-KLM was at 90% while IAG and Lufthansa were both at 86.9%.

Although it may be thought that some decline is acceptable, given the high load, the larger load factor changes have a significant impact on performance. Cathay, for one, is increasingly relying on high load factors to lower unit costs. 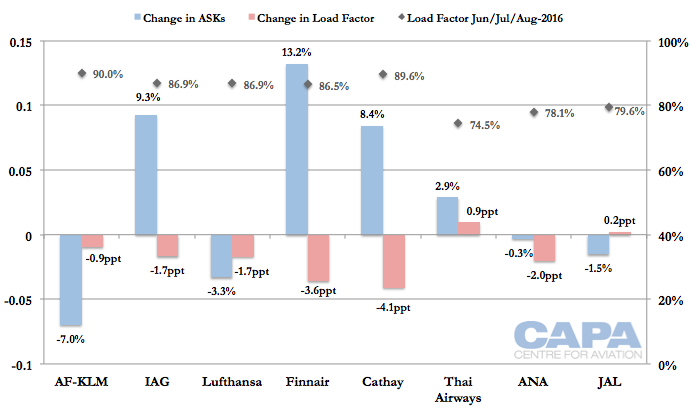 Thai Airways may appear to be the only major airline reporting geographic results to have found equilibrium: it expanded 2.9% while posting a 0.9ppt improvement in load factor. However Thai's load factor – 74.5% – is the lowest, and well below those of competitors. Thai is working on a restructuring that includes improving historically low load factors.

ANA and JAL reported load factors at 78.1% and 79.6% respectively, closer to Thai than to the European airlines and Cathay. ANA made a slight capacity reduction, with a 2ppt drop in load factor. JAL, historically more conservative, made a steeper 1.5% decrease in capacity and had a slight rise in load factor.

ANA and JAL are not necessarily indicative of the industry, given their low transfer volume from Europe and Japan, the Japanese market's high stickiness towards Japanese airlines, and finally the very conservative nature of the population scrupulously avoiding areas with security concerns.

The changes at ANA and JAL are so far minuscule. The combined growth in RPKs from IAG, Finnair and Cathay may represent high percentages for each airline, but collectively their net addition of RPKs has not been enough to offset the contraction from heavyweights AF-KLM and Lufthansa. 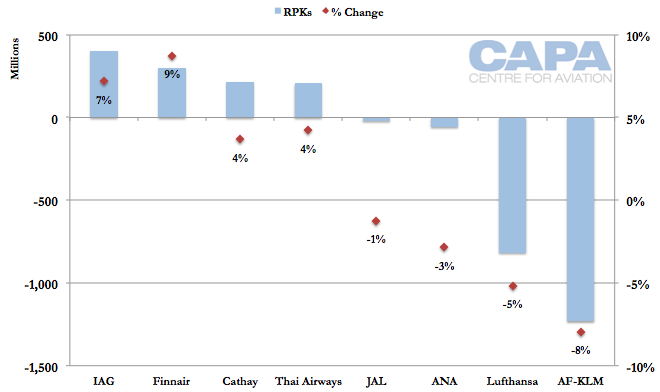 The sources of the large RPK declines for Lufthansa and AF-KLM groups are not publicly disclosed. However looking at capacity data may give indications, assuming there is some correlation between capacity and traffic carriage (which is not always the case).

Lufthansa Group's position appears heavily influenced by India. OAG records Lufthansa having a 7.6% decline in ASKs in India whereas in Northeast and Southeast Asia there was only a 1.3% decline. Lufthansa's exit from Malaysia and decreases in Japan were nearly offset by capacity growth in Hong Kong and mainland China (and, to a lesser extent, Thailand). Much of this is being driven by Swiss upgauging A340-300s to 777-300ERs. Japan capacity decreases may result in a profit impact partially offset by the ANA JV.

AF-KLM's 7.0% ASK reduction in its defined region of Asia broadly correlates with the 6.4% ASK reduction that OAG shows the group having in Northeast/Southeast Asia. AF-KLM's largest reduction by far is Japan – accounting for over 80% of the net capacity reduction. 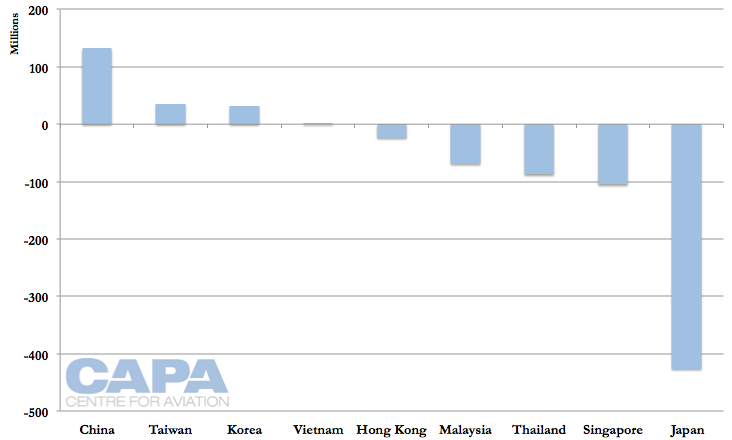 Singapore Airlines has reported five consecutive months of European load factor declines, including a 5.0 point drop in Jun-2016, 4.5ppt in Jul-2016 and a staggering 8.0ppt in Aug-2016. It can be estimated that SIA's European load factor has fallen the fastest of the major airlines that report geographic traffic (included in the chart in the previous section). SIA's average load factor decrease from Jun-2016 to Aug-2016 would have been faster than Cathay's 4.1ppt drop (although Cathay grew capacity considerably).

Some load factor gains were historically made at the expense of yield, but the current complex yield environment makes it difficult to evaluate how negative the total commercial position is. Yield pressure has been an ongoing challenge at SIA.

SIA does not disclose RPKs and ASKs, so is not included in the chart in the previous section. Based on SIA-supplied data to OAG, SIA's European capacity was flat from Jun-2016 through Aug-2016, with a 0.1% ASK increase. The load factor declines indicate there is a reduction in SIA's traffic. SIA's load factor decrease is of greater concern since it is not a case (as seen at Cathay and Finnair) of adding capacity that is not being absorbed; it reflects net traffic decline. 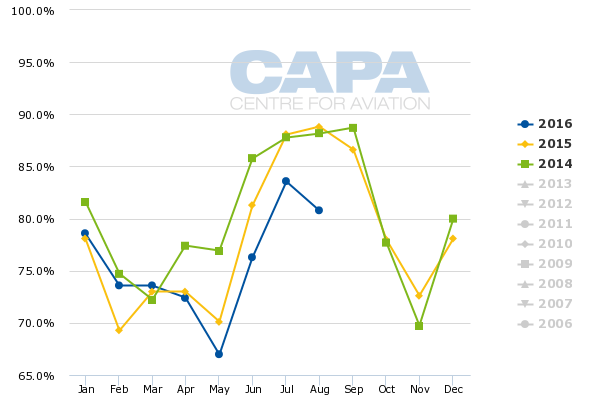 Monthly growth around 5% is planned through Mar-2017, as of Oct-2016. Among airlines the market will continue to be dynamic. Comparing the period from Nov-2016 to Mar-2017 with the prior corresponding period (Nov-2015 to Mar-2016), AF-KLM is forecast to undergo a full year of capacity changes and have flat performance, while Lufthansa will shrink 9% as Swiss grows 22% (albeit from a lower base).

Turkish Airlines, growing 9%, is forecast to overtake Thai Airways as the single largest Europe-Asia airline (but not group).

Cathay is forecast to grow 7% as it absorbs previous route additions and the Sep-2016 launch of London Gatwick. Finnair will expand 5% as it upgauges to A350s; its non-summer growth is slower due to its numerous summer-only services.

The big three Chinese airlines vary: Air China is projected to be flat but is planning new services (Warsaw), while China Southern will contract due to some downgauges and the ending of service to Istanbul.

China Eastern is the standout, with 30% growth following the four European services it launched in a single week in Jun-2016.

There are other Chinese airlines growing or launching for the first time, but they are smaller. Taken together, they are arguably not the overcapacity drivers the market sometimes assumes they are. China Eastern's launch of four cities was too compressed on the market and its own sales efforts. China Eastern works with KLM to connect passengers beyond Amsterdam, one of its four new destinations, but the other three (Madrid, Prague and St Petersburg) are not strong transfer markets, so the capacity influx is confined.

Market fundamentals are weak for the corporate sector, while outbound Asia leisure passengers have concerns about travelling to Europe.

The strongest growth comes from three oneworld entities: Cathay Pacific, Finnair and IAG. Aside from limited growth by Finnair and IAG to Japan, the three oneworld entities are growing independently in Asia. Their growth was bold when planned before the market softness and apparent waning interest in outbound Asia tourism. Their growth now appears too strong relative to the market, but overall is not connected to the very ambitious growth experienced in other markets in recent years.

Historically the airlines have been weak in Europe-Asia. Their time to get ahead has unfortunately coincided with softness.

For all airlines the questions in looking ahead are whether demand softness is part of a trend and the overall market contracts. Balancing yield and load factor was difficult enough before investors focused on declining yields and asked for stability.

There is a growing number of Europe-Asia JVs, but these appear unlikely – in their current form – to considerably change market dynamics, especially with much traffic transiting in the Gulf. Without more weakness, or bolder growth from competitors, airlines do not appear to think they should, or can, reduce capacity.

This dynamic market will one day pick up speed, and when that happens, airlines want to be ready.

The implication is that there is likely to be a disconnect between capacity and demand for the short term - and that the short term could continue for some time. There is a growing list of new airlines keen to access long haul routes, so "rational" capacity behaviour may be a thing of the future.