Armavia took delivery of its first Sukhoi Superjet 100 on 19-Apr-2011. Armavia plans to use the aircraft to operate flights to Moscow, St Petersburg, Sochi and Ukraine. Sukhoi plans to deliver two SSJ100s to Armavia and 11 SSJ100s to Aeroflot this year. The first aircraft for Aeroflot is due to be delivered in mid-May-2011.

Zodiac Aerospace reported a 1H2010/11 net income of EUR114.3 million, up from EUR44.1 million in the previous corresponding period. Shares in the company were up 2.78% on Friday.

Messier-Dowty delivered the first set of the new Airbus A350-900 main landing gears, completing a significant milestone for the programme. This first set of gears has been delivered to the Airbus Filton plant for installation in the A350 XWB test rig. Messier-Dowty’s development programme is moving into the production phase with the first aircraft main landing gears to be delivered to Airbus' final assembly line later in 2011. In parallel, Messier-Dowty is commencing its certification programme with drop test and structural testing starting in the coming weeks. Shares in Massier-Dowty parent, Safran Group, were up 1.1%. 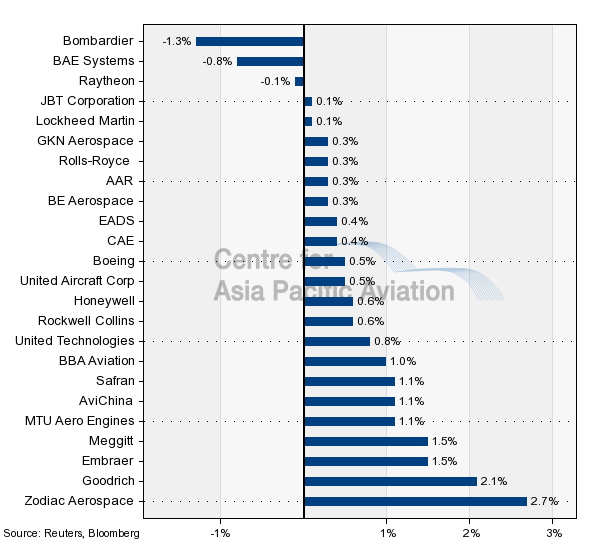