As ancillary revenues and load factors rise, more ink is being dedicated to the consumer issues surrounding ancillary revenues as well as the issues of seat shortages for members wanting to use their frequent flyer benefits. Airlines are already fighting efforts in Congress to tax ancillary revenue, saying it taxes the passenger not airlines. Indeed, the frequent flyer study concludes that restricting seat availability is counterproductive in winning and retaining loyalty - something that airlines, careless of these sensitivities in their rush to revenue should stop to ponder.

A whopping revenue source, but still constrained by IT

Earlier this year the International Air Transport Association predicted that, worldwide, airlines would take in USD58 billion in ancillary fees this year.

These staggering numbers come at a time when global distribution systems have yet to gain the full functionality needed to fully exploit ancillary revenues. They also come as many low fare airlines are transforming their IT systems so they can not only interline – such as JetBlue and American over Kennedy in New York – but get the functionality needed to incorporate fees on their own websites.

Ancillary revenues on this scale are still extremely new and, despite the huge increases since 2008, the potential is enormous, with so many other ways to build the pile, once the technology permits.

While GDSs, Congress and the US Department of Transportation complain about the lack of transparency on behalf of consumers who only know about the fees after they buy the ticket, analysts and media are complaining about the lack of transparency on how airlines count ancillary revenues. Some airlines make them part of the passenger revenue, others put it under “other” revenue, some do both, making it very hard to actually provide an accurate estimate of how much, exactly, airlines are earning from ancillary fees. In addition, many carriers are private companies and do not report out their financial results.

And other revenue earning measures are coming under fire too.

Research company IdeaWorks has addressed another issue that is becoming a tender spot for airlines as they squeeze every corner of the sauce bottle for more revenue.

The study also found that reward seat shortages are the top complaint among passengers worldwide and this has been exacerbated by the sharp cutbacks in capacity in the last year, as high load factors mean there are fewer redemption seats available.

The study was the first ever global survey documenting the disparity in airline reward seat availability. “Frequent flyer programmes may sound the same,” said the report, “but they are not. Some frequent flyer programmes make good on their promise, to customers and the sponsoring airline. Others create as much trouble as they do benefit ‒ for customers and for the airline.”

Despite the complaints, however, loyalty programs remain a crucial tool for airlines to pamper frequent flyers and top spenders. Even so, managing member expectations has become a bigger challenge for award programs. While a passenger may define the success of a program on seat availability, the airline may not, imposing black-out dates and now, with the limited capacity, often give up on loyalty in the face of a fare-paying passenger. But, said the IdeaWorks study, that is the wrong way to go.

“When seats are lacking, consumers grumble in protest to friends, co-workers, and members of the media,” said the study. “Perhaps just behind a la carte fees, reward seat shortages have become the number one complaint among savvy travellers worldwide.

"When seats are plentiful, the love is returned many times over as consumers brag about their good fortune and heap praise for the gift of travel received from a favoured airline.” 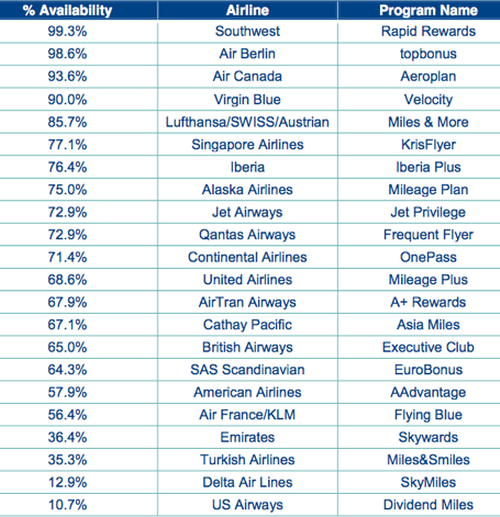 Source: Ideaworks
% of queries that result in outbound and return reward seats
See “Notes regarding query methodology” at the end of this press release.

IdeaWorks made 6,160 booking queries at the websites of 22 frequent flyer programs during February and March 2010. Travel dates spanned June through October 2010; 10 long-haul routes and 10 city pairs under 2,500 miles were checked to assess reward seat availability.

“The top-ranked programmes seem to apply a balanced approach to serving all constituents . . . the airline, members, partners, and investors,” said the study. “These programmes have learned how to create loyalty while generating cash, by providing an adequate supply of seats at the levels offering best reward value. This is helped by controlling liability through aggressive expiration policies. The revenue part comes naturally when members become enthused (and not frustrated) by programme participation.

“Make no mistake, top-ranked programmes make a conscious decision to provide more reward seats – event at the potential short term cost of foregoing revenue from the sale of the very same seat to a fare-paying customer,” the report continued.

“Frequent flyer programmes have an abundant choice of methods to reward members for their loyalty. In addition, pay-with-point options give points an almost cash-like quality. One-way rewards are also becoming more prevalent.”

As the dash for cash moves more pervasively through what were originally loyalty programmes pure and simple, these are words of advice that airlines should heed. Upsetting premium travellers - and these are often the large number who constitute the middle ranking members - runs the risk of losing well-paying passengers who will not quickly switch back. And they understand social media, often better than the airline. Hell hath no fury like a frequent flyer scorned.