Also in North Asia, shares in Air China fell the most in a week after UBS stated its shares were overvalued and the purchase of a controlling stake in Shenzhen Airlines Ltd was expensive.

UBS commented that “the acquisition adds to Air China’s presence in southern China and we think it makes strategic sense,” but added that the “valuation looks steep”. UBS also commented that “running large operations out of Beijing, Chengdu and Shenzhen concurrently could be challenging and it remains to be seen how Air China plans to integrate the network”.

In Shanghai, the carrier’s shares slipped 3.5%, while its shares fell 1.4% in Shanghai trading to JPY12.38, dropping from its highest level since Jun-2008. Air China shares have gained 28% in 2010, bolstered by the prospect of an appreciating Yuan reducing its foreign debt. UBS added that shares of China Southern Airlines were also overvalued. Shares in the carrier were down heavily yesterday (-6.0%).

Shares in Malaysia Airlines jumped 4.7% yesterday, as CIMB Equities Research upgraded the carrier’s stock from “underperform” to “outperform”, with a target price of MYR3, upwardly revised from MYR1.95.

CIMB Research stated its bullish outlook was due to the carrier’s rights issue being completed, with the carrier’s stock remaining depressed and lagging behind regional peers. Additionally, the carrier is expected to benefit from improved macroeconomic conditions, while the carrier’s fleet renewal programme is expected to contribute to significant unit cost reductions from 2011.

In the Indian market, Minister for Civil Aviation, Praful Patel, stated India would likely become one of the Top 5 aviation countries in the world (the country is currently the ninth largest globally), in terms of the number of air passengers handled, in the next five to seven years.

He added that he has “cautious optimism” about the industry's prospects in 2010, adding that there has been a "pick up in the fortunes of the domestic industry" since Oct-2009. Mr Patel added that the scope for future expansion is considerable, stating that the penetration of civil aviation in India is among the lowest in the world, with the country having a ratio of 2.89 million people per aircraft, compared with 0.05 million in the US. 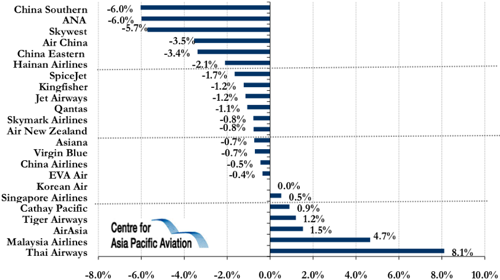