An IPO for Tiger; closer cooperation for Jetstar and AirAsia and a new strategy for Ryanair

Some of the world's leading LCCs, including Ryanair, Tiger Airways, Jetstar and AirAsia, have been in the headlines this week regarding significant strategic moves that will alter the competitive landscape in their respective markets in 2010.

Indigo to sell down Tiger stake

Tiger Airways lodged its preliminary prospectus with the Monetary Authority of Singapore on 21-Dec-2009 in connection with a proposed listing on the main board of the Singapore Exchange. The prospectus did not disclose how much the carrier plans to raise (although reports have the IPO amount has been trimmed to between USD143 million and USD179 million), but did confirm that Citigroup, DBS Bank and Morgan Stanley have been hired to assist with the sale.

Indigo, which currently has a 24% stake in the carrier, will divest part of its stake through the sale, while RyanAsia Ltd plans to decrease its stake if an over-allotment option is used. Singapore Airlines and Temasek have no plans to divest any of their stakes.

OSK Research has maintained its “sell” rating for rival AirAsia, due to recent weaker-than-expected results, but stated that the potential cost-cutting collaboration with Jetstar Airways is “definitely welcome”. The broker stated that “any positive cost reduction may eventually bolster their bottomlines" but warned, “we do not see it [the proposed cooperation] materialising so soon”.

In Europe, Ryanair’s shares gained 2.8%, following the carrier’s termination of negotiations with Boeing for an order of up to 200 new B737-800 aircraft for delivery during the period 2013-2016. Ryanair will now bring forward plans to significantly reduce growth and capital expenditures, to maximise cash balances for distribution to shareholders from 2012. 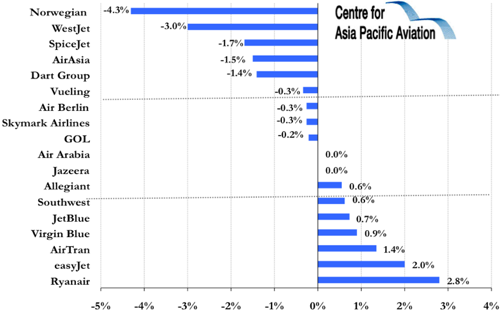