North and South American carriers’ stocks surged on Friday (04-Dec-2009) on news the unemployment rate dropped unexpectedly to 10% in Nov-2009, smaller than the expected 10.2%.

Job losses totalled 11,000 for the month, also less than the expected 130,000 losses, and the lowest number of jobs lost since Dec-2007. According to Morningstar, improvements in passenger traffic typically follow job creation by approximately six months, with demand thus expected to improve even more as job losses subside.

As a result, the AMEX Airline Index lifted 4.3% to its highest point in 21 months. The Dow (+0.2%) was also up, while oil prices dropped 1.3%, to USD75.47, also assisting airline stocks. Full service carriers benefited the most from the unemployment rate news, with US Airways (+9.1%), American Airlines (+7.3%) and Delta Air Lines (+6.0) making some of the largest gains for the day.

US airlines “are a play on the economic recovery”

Analysts at Avondale Partners recently stated US airlines “are a play on the economic recovery”. According to Avondale, the carriers have positioned themselves well to deal with decreased revenues during the global financial downturn, and identified US Airways (+9.1%) and AirTran (+5.7%) as most likely to benefit when the economy recovers. The analysts rate both carriers as ‘Outperform’.

Wall Street Strategies research analyst, David Silver meanwhile forecast domestic LCCs to continue to perform well, stating, “I think you're going to see that these smaller companies are going to have much more room for growth. They're not really into this hub-and-spoke-type mentality; they're able to expand quicker, get more engaged even into the smaller cities and really turn a profit.”

Mr Silver added international carriers, such as Delta and US Airways, are likely to continue to focus on expanding international operations, rather than domestic.

Air Canada (+2.5%) reported a 2.9 ppts year-on-year fall in load factor for Nov-2009, to 74.7%. The carrier increased capacity 2.7% over the period, while traffic fell 1.2%. CEO, Calin Rovinescu stated the off-peak season results are a “reflection of the on-going effects of the weak economy on the industry”, adding the carrier maintains its forecast that it does not expect an economic recovery for 12 to 18 months. 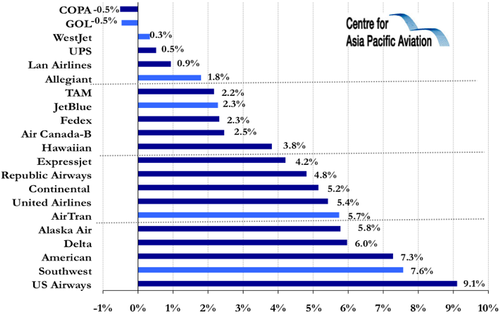