As business confidence slips and the stock market follows suit (or leads), airlines will inevitably be in the front line of economic winds for the remainder of this year. Initial signals are not good – but neither are they convincingly negative.

After a bad week, Wall Street yesterday (01-Jul-2010) stabilised a little, losing a more moderate 42 points for a 0.42% drop. In face of this, most American carriers’ stocks performed moderately well yesterday.

Republic announced planned changes to its fleet “that continue its strategy of operating the most cost-effective aircraft.” The market was however not impressed, driving the company’s stock down 7.5%, as it appeared to see this as a forced redirection in strategy – the implication being that its current one is not working.

Effective Sep-2010, Republic will remove four A318s (126 seats) and one E-170 (76 seats) aircraft from service. Three have been sold to third parties and two “will be returned to their lessors”. In 1Q and 2Q2011, operating entity Frontier will take delivery of six larger (162 seat) new A320 aircraft. All “have firm lease financing arranged”.

During 1Q2010, the company had taken delivery of one A320 aircraft and two E190 aircraft previously purchased from US Airways

Republic Airways Holdings’ CEO Bryan Bedford in May-2010 had reported a net loss of USD36.5 million for the first quarter of 2010. This was the first quarterly loss for the company since 9/11; that was then followed by 32 consecutive quarters of profitability, which, Mr Bedford claimed, “is among the best track records in the industry.” Even so, it was the branded operations that dragged down the Republic results. However, he maintained that, “with the merger announcement between United and Continental, it remains clear that the rationale for purchasing both Midwest and Frontier is justified. Mr Bedford was at that time “modestly bullish” on the outlook.

Consolidation an issue, as the market gets tougher at the regional end

As the Centre reported at the time of the company’s first quarter conference call, Mr Bedford noted that “Even though it was clear that our branded operations would lose money in the first quarter, frankly, none of that makes the results any easier to accept…We, support consolidation and hub rationalisation, even though both of those processes could result in lower overall demand for our core fixed-fee flying. However, as our partners, who have struggled to maintain profitability in the last cycle, return to sustained profitability, the counter-party risk on our CPA contracts also decreases and since we have very long CPA contracts in place, that reduced risk is welcome.”

Republic’s United contracts start expiring in 2015 and go out through 2019. 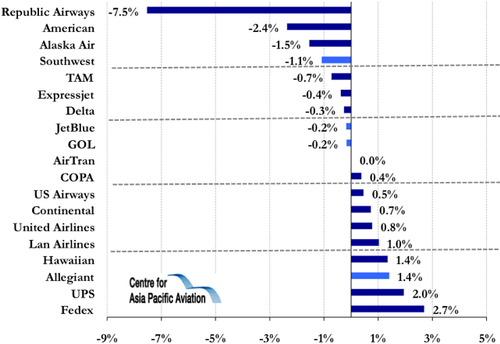 Source: Centre for Asia Pacific Aviation & Yahoo! Finance
*It was a public holiday in Canada on 01-Jul-2010