The majority of North and South American carriers’ stocks were down on Tuesday (29-Sep-09), with the AMEX Airline Index slipping 0.3%, down with the wider market as the Dow was down 0.5%. Oil prices (-0.2%) also dropped during trading to USD66.71.

AMR confirmed during trading the completion of its offering of 48.5 million shares of its common stock and USD460 million of its 6.25% convertible senior notes due 2014. Completion of the offerings, which closed on 28-Sep-09, together with a number of other recent transactions, has improved the company's liquidity position as it seeks to weather the current global financial downturn and build a financial foundation for the future. The aggregate net proceeds from the offerings, after underwriting discounts and expenses, were approximately USD830 million.

AMR and American Airlines (0%) have announced approximately USD4.2 billion in additional liquidity and new aircraft financing in Sep-2009. All of this financing is in addition to the more than USD1.2 billion the company raised earlier this year through both private and public financing of owned aircraft and the financing of new B737s to be delivered through 2011.

AMR also announced that American Airlines has repaid in full its USD432 million secured bank term loan facility, which will be refinanced using the proceeds of the carrier's private sale of USD450 million principal amount of senior secured notes. This transaction is expected to be completed on  9 October 2009.

The Sep-2009 financing and liquidity announcements consist of:

AMR also announced that the full amount of the reserve previously held by American's credit card processor has been released to American today. Giving effect to the release of this money, the repayment of American's bank term loan facility, and cash received from the financing transactions referred to above, the company expects to end the 3Q2009 with approximately USD4.4 billion in cash and short-term investments, including approximately USD460 million in restricted cash.

Meanwhile, Alaska Airlines (+2.5%) was the strongest gainer of the day, after Sidoti & Co initiated coverage of the carrier with a Buy rating and price target of USD43. 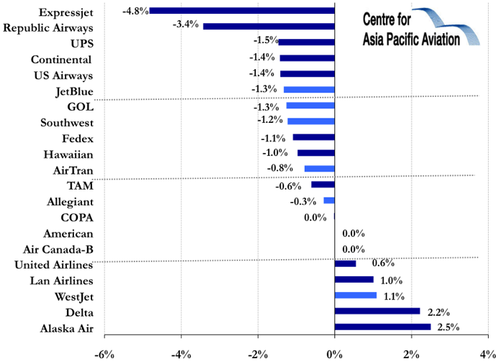