The same pressures plaguing it US global network rivals Delta and United are also creating challenges for American Airlines in 2Q2015 as it is projecting a similar passenger unit revenue decline to United of 4% to 6%.

Similar to United, American recently refined its 2015 capacity targets by a half a percentage point as supply-demand imbalance has become a short-term mainstay in most of its markets. And like United, American believes 2Q2015 should be the low point for passenger unit revenue degradation in 2015.

For the moment US airlines are weathering unit revenue decline in part through lower fuel costs. But at some point energy expense will inevitably rise, and a rebound in unit revenues will be necessary to continue the industry’s sustained profitability.

American charts trans-Atlantic strength and stays the course in Dallas

American recorded a passenger unit revenue decline of 1.7% during 1Q2015, which is the same decrease reported by Delta Air Lines. United’s unit revenues notched up 0.4% in the quarter. American estimates that 1ppt of the unit revenue decline in 1Q2015 was the strengthening of the USD against other currencies, 0.4ppt stemmed from reduced fuel surcharges and 0.5ppt from the significant pull-down in capacity to Venezuela during 2H2014.

The trans-Atlantic was American’s best performing geographical entity in 1Q2015 as a 4.2% rise in yields drove 3.4% unit revenue growth year-on-year. American had the largest capacity decrease in the region among the three large US global airlines of 8.6% (United posted a 5% decline and Delta recorded a 4% increase). American president Scott Kirby said during the airline's 1Q2015 results call that American was pleased with absolute demand in those market despite currency and capacity pressure.

Mr Kirby stated that American has no plans to cut capacity in Dallas, noting many of the markets where industry supply is rising are critical to its hub at Dallas/Fort Worth. DFW is American’s largest hub measured by both seat and ASM deployment for the week of 27-Apr-2015 to 3-May-2015. 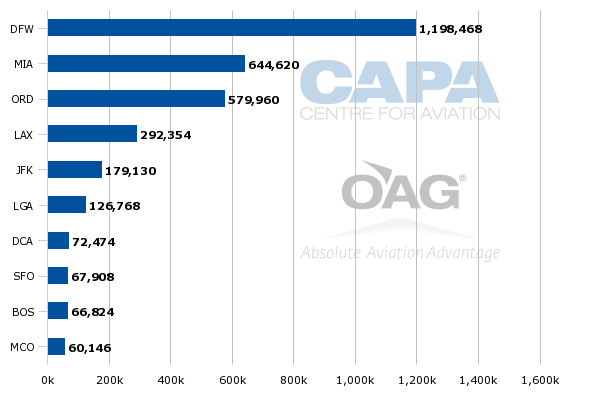 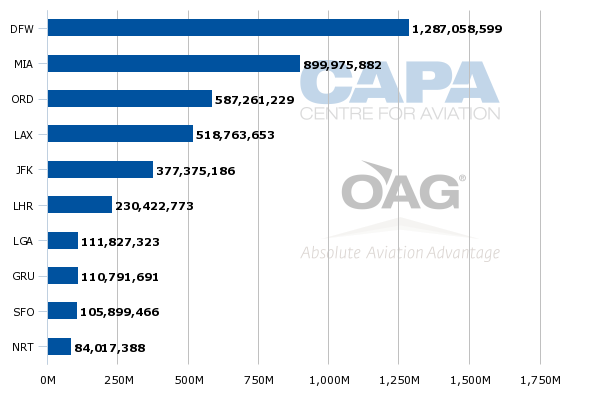 Mr Kirby concluded that the lower fares accompanying the additional capacity have actually increased demand, and that American may need to upgauge aircraft on certain routes where the demand has grown. He stated he is of the mindset that there is a new equilibrium point where the supply curve has moved, and when the curve moves that much obviously pricing changes. Mr Kirby’s conclusions seem to indicate that the new pricing points in the Dallas market could be a mainstay for the foreseeable future.

American’s largest unit revenue decline during 1Q2015 was in the Pacific. Unit revenues in the region fell by 6.9% on a yield decline of 6.8%. Its capacity growth jumped 35% year-on-year as it continues off a much smaller base in Asia than United and Delta. Over the last couple of years American has launched service to Seoul, Shanghai, Hong Kong from DFW, and service to Beijing begins in May-2015.

Mr Kirby stated that currency headwinds and lowered surcharges drove the unit revenue declines; but overall American was pleased with demand on the routes given its capacity growth to Asia.

Weakness in Brazil and Venezuela continue to dull American’s results on routes to Latin America. It posted a 6.2% drop in unit revenues to the region in 1Q2015 as yields fell 7.2%. American’s capacity to Latin America declined by 6.7% year-on-year during 1Q2015.

One positive development for American in Latin America is that Argentina appears to be recovering, said Mr Kirby. He also said that despite double digit industry capacity growth to Mexico and the Caribbean, unit revenues were flat, which indicated that demand grew rapidly to keep pace with the capacity increases.

Mr Kirby stressed that year-on-year comparisons for 2Q2015 will be more difficult than any other quarter in 2015. As industry capacity pressure continues in all regions, American is forecasting a 4% to 6% decline in passenger unit revenues with the largest declines in the Pacific and Latin America. Once American laps some of the pull-down in Venezuela in 2H2015, comparisons should become a bit easier. The airline recorded 4.5% passenger unit revenue growth in 2Q2014.

American estimates that 2ppt of the unit revenue decline in 2Q2015 stems for currency headwinds while 0.7ppt stems from lower fuel surcharges.

American identified the supply-demand imbalance beginning in 2014 and took steps to reduce its capacity, and has lowered international capacity versus prior guidance for the previous four quarters, said Mr Kirby. The proactive approach is helping he concluded, “but not enough to overcome currency and capacity headwinds”.

Mr Kirby concluded that while American does not like to see negative passenger unit revenues, the airline does believe demand remains fundamentally strong in most geographical areas with the exception of Brazil and Venezuela. Unfortunately, he concluded, currency and fuel surcharge pressure mask that strength, and high single digit capacity growth in all regions pressures otherwise growing demand.

American has not crystallised guidance for 2016, but it has deferred deliveries of five Boeing 787 scheduled for that year. Four of these aircraft will now be delivered in 2017 and one in 2018.

Mr Kirby remarked that American has also accelerated the retirement of MD80s ad Boeing 767s, which will also affect 2016 capacity. He believes as along as a supply-demand imbalance drives negative unit revenues, then American’s philosophy of conservative capacity growth will guide the airline in 2016.

With all the discussion by the three global US airlines about competitive capacity pressure, they are all increasing capacity by taking delivery of denser aircraft and adding seats to some existing aircraft. Their logic is that the growth is efficient, helping to reduce unit costs and sustain margins.

Another benefit of the increased seat density is it allows airlines to compete more effectively against ULCCs. The real advantage of ULCCs is “just cramming as many seats as possible on an airplane”, Mr Kirby said. By operating denser aircraft, airlines such as American spread the costs of operating the aircraft over more seats, which “makes us that much more competitive with ULCCs” he concluded.

Both American and United as well as other airlines are in the process of adding seats to their aircraft. United is taking upgauging one step further by transitioning 10 Boeing 777-200s widebody jets used in international service to domestic operations, mainly hub-to-hub service. Mr Kirby stressed that American does not have similar plans, concluding that it is more cost effective to operate two narrowbody jets than a single widebody for the same number of seats.

Mr Kirby remarked that at the same time nearly every US airline is reporting passenger unit revenue pressure, they are posting record profits. Even as some airlines face hedges losses due to the rapid drop off in fuel costs, the decline in oil prices is no doubt a major contributor to airline profitability and helps to offset some of the unit revenue pressure that is prevalent in the industry.

But at some point fuel costs will inevitably rise, and airlines will need to ensure that unit revenues have rebounded in order to weather the increase. Mr Kirby acknowledged that when fuelb costs again start to rise year-on-year, “what that really means is that we’ll have to have RASM [revenue per available seat mile] growing”.

US airlines may need to re-examine their supply growth, however efficient it may be

In the short term the industry-wide challenges in the US of currency headwinds and competitive capacity pressure are remaining intact through 1H2015, and are threatening to pressure unit revenues for the full year.

American and its major global US airline counterparts are for the moment able to weather those pressures in part due to lower fuel costs. American is one of the few airlines that does not hedge fuel, and enjoyed a 43% drop in top-line fuel expense in 1Q2015.

Even as airlines laud the capacity growth they are planning as efficient, at some point a re-examination of supply increases may be necessary as unit revenue weakness is not viable over the long term. 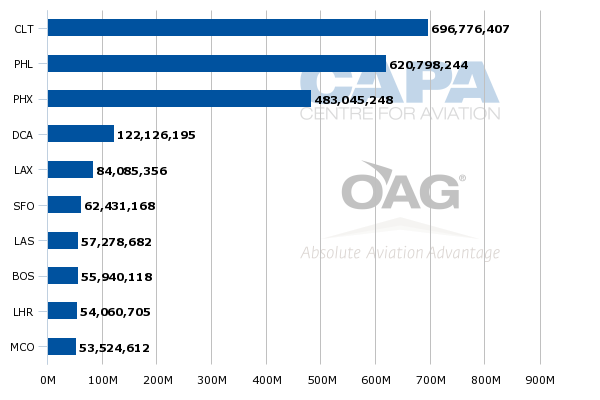 *Note: American and US Airways are in the process of merging