American Airlines is joining its US legacy rival Delta during 2013 in making a push from Los Angeles International Airport, a strategic but highly fragmented market where no one carrier holds a dominant, commanding position. Presently United has a marginal edge over its two rivals in terms of seat share, but it appears that American and Delta are aiming to close that gap by adding new service from Los Angeles throughout the year.

Unlike Delta, which is launching service to some already-crowded markets from Los Angeles, American appears to be undertaking a different strategy, introducing service in markets served by only one other carrier. In some instances the only other competitor is Allegiant Air, which is a low-frequency operator whose business model is not built on competing with other airlines based on schedules. In other markets Delta is American’s lone competitor, introducing an interesting set of competitive dynamics into the Los Angeles market.

American continues to build out its Los Angeles cornerstone market

Los Angeles has been one of five focal points for American since 2009 when the airline unveiled its “cornerstone” strategy that centred its flying on five hubs – Chicago, Dallas/Fort Worth, Los Angeles, Miami and New York. The manoeuvre is one adopted by all US legacy carriers during the last few years as they worked to streamline their networks by cutting unprofitable capacity that did not touch their main connecting hubs.

Based on current schedules in Innovata (15-Apr-2013 to 21-Apr-2013), American presently holds a nearly 20% share of the seats on offer from Los Angeles, which is roughly equal to United’s share. Delta holds about a 14% seat share. The rest of the seats are distributed among carriers with less than a 7% share.

Los Angeles has always been a highly fragmented market with most of the majors claiming the airport as a focus city or hub. The exception is US Airways whose Phoenix hub is 322nm away from Los Angeles. 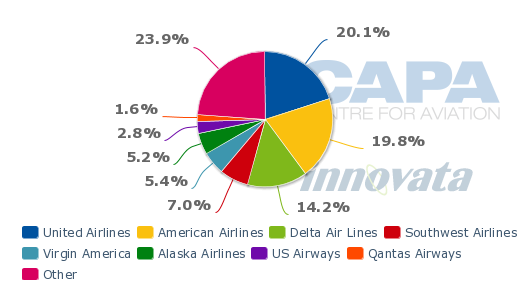 Now between Apr-2013 and Nov-2013 American plans to introduce service to nine new markets including Sao Paulo (pending government approval), which would link two major markets in North and South America and strengthen American’s leading position as the largest carrier between the US and Brazil in terms of seats on offer.

American’s decision to launch flights from a fourth major US gateway to Brazil is a natural evolution of the carrier’s strategy to solidify its strength in the US-Latin American market. The carrier presently serves Sao Paulo from its Miami, Dallas and New York hubs. Service to Sao Paulo from its fifth cornerstone market and hub at Chicago O’Hare is expected to launch in late 2014. 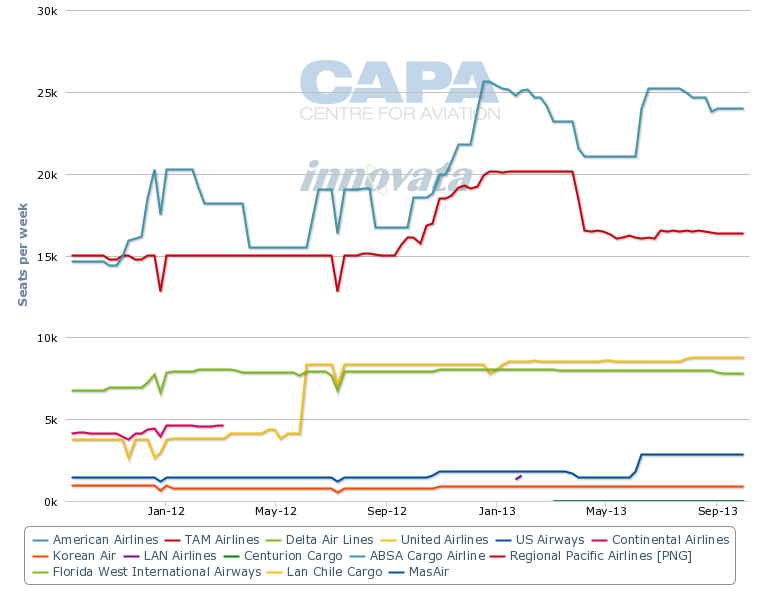 Presently only Korean Air offers service from Los Angeles to Sao Paulo as part of a Seoul-Los Angeles-Sao Paulo routing. American should be able to garner enough demand to make the route successful given growing travel between the US and Brazil, and the attractiveness of offering just one stop to Brazil through Los Angeles for customers based elsewhere on the US west coast.

American’s potential long-term success on the pairing is also underpinned by LATAM Airlines Group’s decision to join the oneworld alliance as American will enjoy passenger feed from Sao Paulo’s largest carrier TAM, which is transitioning from Star to oneworld now that parent LATAM has decided to align with oneworld. TAM is the second largest carrier in the US-Brazil market but only has three gateways - Miami, Orlando and New York - and has been focusing on growing at these three gateways rather than launch new US gateways such as Los Angeles.

American has selected markets in its latest expansion from Los Angeles where a single carrier holds a monopoly status, which should benefit travellers as fares will naturally fall as the carrier introduces promotional pricing in the markets.

Schedules in Innovata show that Delta is the sole operator from Los Angeles to Columbus, Indianapolis and Raleigh-Durham. Currently Delta operates three weekly flights with Boeing 737-800s on the Los Angeles-Columbus pairing, resulting in roughly 450 one-ways seats on offer. American will more than double that amount when it begins daily 737-800 in the market in Aug-2013 with about 1,100 weekly seats. The same pattern will be replicated in Indianapolis, where Delta offers approximately 450 weekly one-way seats on thrice weekly flights flown with Airbus A320 narrowbodies.

American commenced service between Los Angeles and Raleigh-Durham on 2-Apr-2013, joining Delta on the pairing. Both carriers operate 737-800s on the route, with Delta offering six weekly flights. American offers seven weekly flights on the pairing. Presently, American holds a 51% seat share and Delta accounts for 49% of the seats on offer in the market, according to CAPA and Innovata data.

American will compete with United on its 737-800 operated flights from Los Angeles to Pittsburgh. Schedules in Innovata show that United operates A320 narrowbodies on the pairing, and presently offers almost 600 one-way seats in the market, rising to roughly 850 when American launches seven weekly flights on the pairing in Aug-2012. Los Angeles-Pittsburgh was previously served with multiple daily frequencies from US Airways, which is now in the process of merging with American, back when Pittsburgh was a US Airways hub.

On new routes from Los Angeles to Fayetteville and Eugene, American will compete with Allegiant Air, a carrier who offers low-frequency service from large leisure destinations including Los Angeles, Las Vegas, Orlando, Tampa and Phoenix to smaller US markets. When American introduces service to Eugene in June with 50-seat Bombardier CRJ200 regional jets it will add nearly 900 additional weekly seats into the market, tripling the 300 seats on offer from Allegiant, which operates two weekly flights in the market.

American is also introducing daily service to Fayetteville with 70-seat CRJ700s. Schedules in Innovata show that Allegiant plans to offer about 300 weekly one-way seats in the market when American launches its Los Angeles-Fayetteville offering in Jun-2013.

American faces no competition on its 737-800-operated flights to Hartford, Connecticut that commence in Aug-2013. It will also be the lone operator on service from Los Angeles to Redmond that begins in Jun-2013.

American parallels a similar push by Delta from Los Angeles

As American makes its latest push from Los Angeles, its legacy rival Delta is also in the midst of an expansion from the airport spanning from Apr-2013 to Jul-2013. New year-round flights include service to Seattle and Spokane, Washington; Nashville, Tennessee; and San Jose, Costa Rica.

Some routes in Delta’s new crop of markets are highly competitive, particularly Seattle, which is served by its codeshare partner Alaska Airlines, United and Virgin America. After Delta launches service it will only account for 8% of the seats in the market. Delta will compete with American and Southwest on its new service to Nashville, and usher in the first non-stop flights to San Jose from the US west coast.

See related article: Delta presses forward to build a competitive network in a consolidated and mature US market

Some of the new domestic routes will also feed American’s planned flights to Sao Paulo and existing long-haul flights to London and Shanghai.

American touts that after it launches the latest batch of markets from Los Angeles, it will offer service to roughly 51 domestic and international markets, which is more than the 40 Delta plans to serve once all its new services debut. So far during 2013 United has not responded with its own push from Los Angeles, but even with the new service American and Delta will still trail United’s 65 destinations on offer from the airport.

The dynamics may become more interesting once American and US Airways become fully entrenched in their merger integration. Given Phoenix’s proximity to Los Angeles, some service from Phoenix could become redundant. If that occurs the scales in Los Angeles could be tipped in the “new” American’s favour.

In the meantime the new services by American and Delta may tip the capacity balance slightly but the reality is that Los Angeles will continue to remain fragmented as it will never be a true hub for any of the US majors. Its status as a major trans-Pacific and international gateway means that it will continue to feature prominently in the strategy of all the major network carriers, but none of them will play a prominent role at the airport.