American Airlines is sticking to its overall bullish view on demand going forward, buoyed by strong top-line 3Q2014 results despite its outsized exposure to Venezuela and the run-on effects of capacity cuts it has made on service to the country.

The airline is taking steps to mitigate oversupply in some of its geographic entities. But some of its peers are not following suit, which could create some short term headwinds until a rational supply-demand balance is restored.

American in particular will start to see relief from Venezuela’s currency issues in early 2015 after its network adjustments to the country pressured unit revenues in 2H2014.

American’s consolidated passenger unit revenues increased 1% in 3Q2014, which was the lowest increase among the three large US global network airlines. American’s performance in that metric was pressured by 1.5ppt in 3Q2014 after it cut capacity to Venezuela from 48 weekly flights to 10 in response to Venezuela’s weak economy.

American has also estimated the cuts would pressure its passenger unit revenues by 2ppt in 4Q2014. The airline’s frozen funds balance in Venezuela has decreased by USD70 million to USD721 million, which is held at an exchange rate of VEF6.41 to the USD. American is the largest US airline operating to Venezuela and South America.

At the end of 2Q2014 American stated it was cutting capacity to Latin America by 5% in 2H2014, which would result in flat supply growth to the region in CY2014. 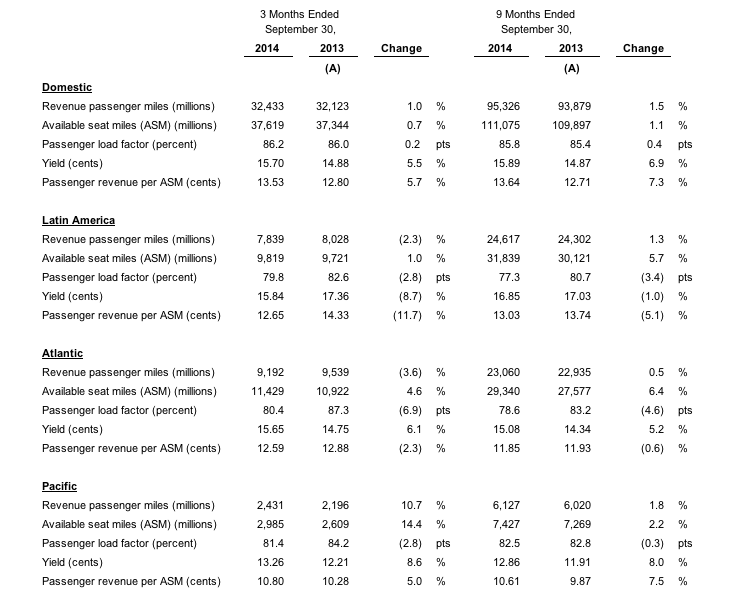 American president Scott Kirby stated the challenges American faces in South America are short term, and remarked that the pressure on the airline’s unit revenues from Venezuela would mitigate in 2015. He estimated the adjustments to Venezuelan capacity would impact passenger unit revenues by 0.4ppt in 1Q2014 and by 0.3ppt in 2Q2015.

The domestic market remains robust for American and its peers

Similar to its peers United and Delta, the domestic market was American’s top performing entity in 3Q2014, with both yields and passenger unit revenue increasing nearly 6%. Mr Kirby stated that American enjoyed double-digit gains in passenger unit revenues in New York during 3Q2014, and concluded the airline’s hubs with most competitive overlap – Chicago O’Hare, New York LaGuardia and Los Angeles – are recording the greatest improvement in performance.

American is bracing for some pressure following the 13-Oct-2014 lifting of the Wright Amendment that prohibits some long-haul service from Southwest’s hub at Dallas Love Field. But Mr Kirby stated American’s passenger unit revenues on Dallas routes where it is now encountering competition from Southwest are still up 3% year-on-year from when the restrictions were lifted to the end of Oct-2014.

In the trans-Atlantic market, American’s yields increased 6% in 3Q2014, but passenger unit revenues fell 2.3%. During 2H2014 American is cutting its trans-Atlantic capacity by 3%, which will result in a 2% rise versus previous projections of a 5% increase.

Mr Kirby stated that other airlines have opted not to institute the same capacity reductions as American, but that “it will turn out to be a good decision for us”.

Delta and its SkyTeam joint venture partners Air France-KLM and Alitalia have halved their planned capacity increase for the winter 2014/2015 time period to 1% to 3% growth. United and its Star joint venture airlines Air Canada and Lufthansa are cutting their trans-Atlantic supply by 0.5% for the same time period, with United’s capacity decreasing 3%.

American continues to outperform its peers in the Pacific, largely due to starting from a smaller base. It has the smallest presence in the trans-Pacific among the US global network airlines. But during 2014 the airline has made a push into Asia with new service from its DFW hub to Hong Kong and Shanghai.

Offering a broader view of American’s position in the Pacific, Mr Kirby emphasised American’s relatively small presence in the region, and in many respects American was “starting from behind”. Data from CAPA and OAG show that for the week of 20-Oct-2014 American has about a 6% share of seats between the US and Northeast Asia compared with about 14% for Delta and nearly for United.

Mr Kirby remarked that given its smaller footprint in Asia and its efforts to expand its presence, adding a new route such as Hong Kong effectively creates new customers for the airline. “Unlike adding service to Sao Paulo or Kansas City where we already carry some of that traffic so some of that cannibalises off our new flights, when we fly to Asia, almost all of the passengers are incremental to American.”

Even as it battled weakness in Latin America and some oversupply in the trans-Atlantic, American (which focuses on non-GAAP in comparing combined year-on-year results of American and US Airways) grew top-line revenues year-on-year in 3Q2014 to USD11 billion. Top-line expenses increased 3.5% to USD9.9 billion, resulting in a 11.8% increase in operating income to USD1.3 billion. Its top-line profits grew from USD289 million in 3Q2013 to USD942 million in 3Q2014. 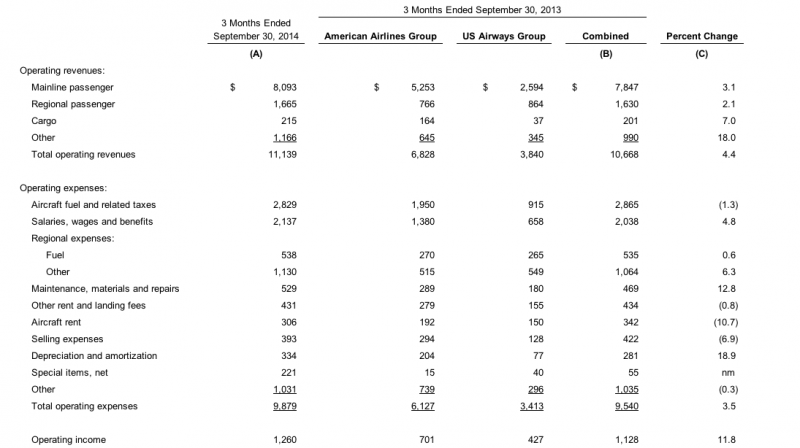 American in 2015 is planning similar capacity growth to its large global network peers Delta and United in the 2%-3% range. United is planning 2% growth after 0.2% to 0.4% growth in 2014 and Delta expects supply expansion of 0% to 2%.

Both United and Delta attributed their respective supply expansion in part to increased gauge, and American is expressing similar sentiments. American estimates that 1.5ppt of its planned 2015 capacity increase stems from densifying its Boeing 737-800s and 777-200s. It is increasing seat counts on the 737-800 narrowbodies from 150 to 160 and adding 42 seats to the 777-200 widebodies for a total of 289.  American expects both its international and domestic capacity to grow by 2% to 3% in 2015.

All three US major global network airlines are keeping their capacity growth for 2015 in line with the projected GDP growth for the US of roughly 2%, but some of the airlines are growing consolidated capacity at a slightly higher rate than 2014. The growth appears to be raising some questions among the analyst community, but all of the airlines are assuring that the rise in capacity is being executed efficiently. American stated it believes the additional seats are earnings accretive given their low variable costs.

American does believe that competitive capacity pressure in certain regions will carry over into the winter 2015 time period. Mr Kirby remarked that industry capacity during that time is rising roughly 10% in the Pacific, Latin America and the trans-Atlantic, and stated demand is not in line with those growth levels.

American post impressive results in the early days of its merger

Since American and US Airways closed on their merger in Dec-2013 the combined entity has turned a favourable performance, recording non-GAAP profits of USD2.3 billion for the nine months ending 30-Sep-2014. It projects a 4Q2014 pre-tax margin of 10% to 12%.

The results are impressive for such early days of the merger of American and US Airways. But as American’s executives repeatedly stress, the most difficult integration tasks lie ahead in 2015. For now it appears one of American’s short-term challenges is ensuring it sustains a favourable financial performance as capacity overhang remains in some of its key geographies.