American Airlines indicates its positive momentum is continuing in 2Q2014

American Airlines is projecting favourable results for 2Q2014 as its pretax margin is estimated to more than double the airline’s margin performance in 1Q2014. Its unit revenues are projected to grow 5.5% to 6.5%, which bodes well for the US summer high season that began in Jul-2014.

But underlying that strong performance is estimated CY2014 capacity growth of 3%, which is higher than the new normal in the current age of capacity restraint. American assures that the growth is largely driven by aircraft upgauging rather than a return to irrational supply growth within the market place. Most of the growth is geared towards international markets, reflected in American’s recent launch of flights from its Dallas/Forth Worth hub to Hong Kong and Shanghai in Jun-2014.

Those routes may take some time to spool-up as American’s executives have admitted that the airline’s Asian markets have not been historically profitable.

Even as the American-US Airways merger remains in its early stages, for the moment the tie-up seems to be running smoothly as the airline the airline’s performance in key metrics is matching its US peers.

Traffic increased in all of American’s geographical entities with the exception of the Pacific, where revenue passenger miles fell 3% year-on-year. The airline recorded the highest traffic growth in the trans-Atlantic of 3%, which was also the second largest region where American posted the largest capacity expansion year-on-year of 7.5%.

The outpacing of capacity versus demand on American’s trans-Atlantic routes resulted in a load factor decline in the region of 3ppt to 77%.

Air France-KLM recently lowered its guidance for 2014, in part due to overcapacity in its trans-Atlantic markets. Lufthansa has reached similar conclusions about trans-Atlantic capacity, which has contributed to the airline revising its profitability forecast for 2014.

As recently reported by CAPA, seat growth between Western Europe and the US for the peak summer month of Aug-2014 is projected at 8% versus 5.5% growth the year prior. But the overcapacity is modest given that the three immunised trans-Atlantic joint ventures among partners in the oneworld, SkyTeam and Star alliances allow for greater cooperation in capacity management.

American CEO Doug Parker is dismissing any signs of oversupply or weakness in European markets. He recently told the Dallas Morning News that capacity is growing in the trans-Atlantic, but demand is increasing as well.

Both American and Delta have cited some weakness in Latin America due to Brazil’s hosting of the FIFA World Cup in Jun-2014 and Jul-2014, and the decline in business travel triggered by the tournament. During 1H2014 American’s traffic to Latin America increased 3% on nearly 8% capacity growth, which drove load factors down 3.6ppt to 72%.

Even with the proclamations by some airlines of overcapacity in the trans-Atlantic and the weakness ushered in by the World Cup, American’s unit revenue projections of up to 6.5% growth year-on-year for 2Q2014 are robust, helped in part by what seems to be a better supply-demand balance in its US domestic markets, where traffic increased 1.8% year-on-year in 1H2014 on 1% capacity growth, which resulted in a 0.5ppt uptick in load factor to 85.6%.

Accompanying American’s positive unit revenue projections for 2Q2014 is a pre-tax margin estimate of 12% to 13%, which is roughly triple the 4.1% the airline recorded during 1Q2014 when it faced some headwinds from numerous winter storms that struck the US northeast and midwest.

American’s pre-tax margin performance during 1Q2014 was in line with results recorded by Delta and Southwest, which is encouraging given the integration tasks it had underway.

American Airlines 1Q2014 margin performance vs its US industry peers 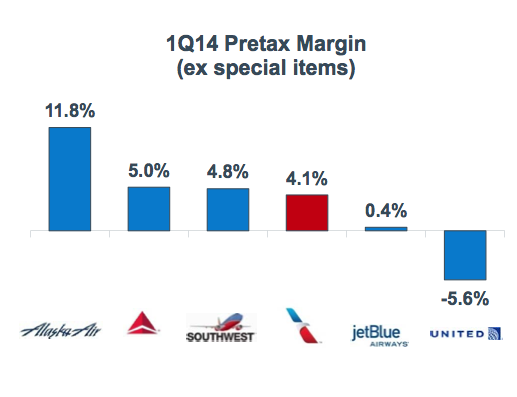 The airline’s unit revenue growth during 1Q2014 was also essentially in line with Delta, and roughly half a percentage point behind Southwest.

American also ended 1Q2014 with a solid liquidity position of USD11 billion including undrawn credit facilities. The result is a roughly 28% liquidity to trailing 12 month revenues, which is also trending with most of its US airline peers.

A performance in line with its peers in margin growth and unit revenue in addition to its strong cash balances is giving American favourable footing as it enters the busy high season, which should produce even better results for the airline if demand is in fact meeting its expectations.

Weak Latin results should rebound, but Asian profitability is further afield for American

Alongside a commendable performance relative to its peers, two other important metrics are growing at American – capacity and unit costs.

American estimates that 6% of the overall 3% increase in capacity during 2014 is being driven by international expansion, including two long-haul routes from DFW to Hong Kong and Shanghai launched just prior to the close of 2Q2014.

It is not likely those routes will make a positive contribution to American’s revenue any time soon as Mr Parker declared to the Dallas Morning News that the airline’s routes to Asia have not been profitable; however, the company understands the importance of investing in the region, and American’s unit revenues on its Asian routes during the last year have grown faster than the industry average.

For the moment American’s smaller footprint from the US to Asia relative to Delta and United is likely positive given that United in particular has cited excess capacity in its trans-Pacific markets. Based on data from CAPA and OAG for the week of 7-Jul-2014 to 13-Jul-2014, United represents a 17% seat share to North Asia, Delta holds a 14.5% share and American holds approximately 6% of the seats on offer.

United has warned that it expects US-China capacity to grow 20% year-on-year in 2Q2014, which shows American’s new route to Shanghai faces a long spool-up period. However, United has issued better than expected unit revenue growth guidance of 3.5% for 2Q2014, driven by improved results in its Pacific and domestic entities.

As capacity pressure continues in the Pacific, American and other airlines should quickly rebound from the sluggish performance in Latin markets with the conclusion of the World Cup in Jul-2014. Roughly 14% of American’s international seat capacity is deployed to Latin America and the airline commands a 32% seat share between the US and upper South America. 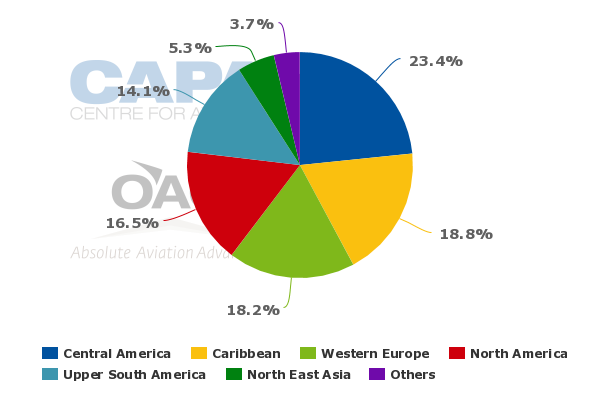 American’s cost projections are a bit higher as the carrier expects mainline unit costs to grow 1% to 3% year-on-year during 2Q2014 and for CY2014. Unit costs in its regional operations are projected to increase 5% to 7% year-on-year in 2Q2014.

American is working hard to ensure that it can execute as smooth a merger integration as possible, and continues to stress that much work lies ahead. More importantly, the airline’s management readily admits there will be inevitable glitches in the process, but aims to minimise merger disruptions.

Obviously there is much for American to accomplish before the merger can be deemed a success – a reservations system cutover, a single operating certificate and cross-fleeting.

But for now the airline is showing positive early signs that it will reach its USD1.2 billion synergies targets in a reasonable period of time, something its peer United has failed to accomplish.