North and South American airline stocks all advanced on Wednesday (24-Nov-2010) as the peak Thanksgiving holiday travel period commenced. The day is traditionally the busiest of the year for the travel industry. Stocks were also up on a rebound in wider markets, with the Dow (+1.4%) and Latin American markets rising.

Airlines also gained on news only a few passengers have opted out of full-body scanners and instead receive a pat-down in hopes of creating delays at US airports during the day.

US Airways (+5.8%) was among the biggest gainers, reaching its highest intra-day level in almost three years during the session. During trading, the carrier announced the signing of a codeshare agreement with TAM to increase the number of destinations for the passengers flying from or to South and North America. Effective 01-Dec-2010, TAM passengers will have new options of internal services in the US departing from bases in Miami, New York and Orlando. Initially, the (two-way) services between Miami and Philadelphia; New York and Phoenix; Orlando and Phoenix; Orlando and Philadelphia, and Orlando and Washington will be offered.

Hawaiian Airlines (+8.4%) continued to rise for the day after Stifel Nicolaus initiated coverage of the carrier with a "buy" rating and a price target of USD10.50 the day prior. 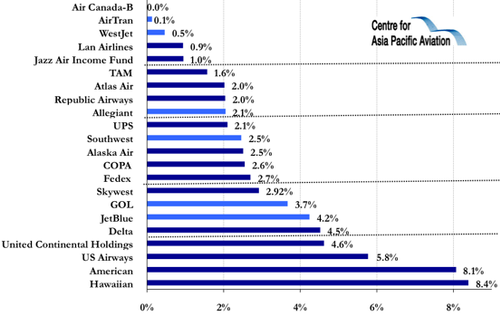