American Airlines does not foresee a return to unit revenue growth until 2H2016 as industry capacity increases that occurred during 2Q2015 should remain at similar levels until that time. American’s 7% decline in passenger unit revenues during 2Q2015 was the largest among the four major US airlines.

Similar to those other airlines, American posted record top-line financial results in 2Q2015, which for now does not seem to be enough to allay investor concerns about declining unit revenue.

Perhaps the reason investors have lingering concerns over declining unit revenues is that US airlines are still in the midst of proving that their financial performance is moving closer to sustained investment grade. Investors at this point have no frame of reference to feel assured that airlines can successfully weather current revenue dynamics.

American’s passenger unit revenues fell 7% year-on-year during 2Q2015, which was a bigger decline than the 4.6% decrease posted by both Delta and Southwest and the 5.6% decline recorded by United Airlines.

American posted the largest PRASM and yield declines in Latin America in 2Q2015, where passenger unit revenue fell 13.4% and yields dropped 14% on a 7.2% decrease in capacity. Weakness in Venezuela and Brazil each attributed to roughly a half point of American’s total 2Q2015 PRASM decline. Roughly 2ppt of the decline stemmed from the appreciation of the USD against several global currencies and lower fuel surcharges on international flights due to the decline in oil prices.

Company president Scott Kirby recently stated that Brazil’s PRASM fell 24% during the quarter on a 20% drop in capacity. Venezuela’s PRASM fell 40% on a 59% capacity cut. American is starting to lap the period in 2014 when it began a drastic pull-down in service to Venezuela and a capacity reduction to Brazil. Going forward the PRASM decline in each of those markets should be less intense.

Mr Kirby stated that American’s PRASM decline for the rest of Latin America during 2Q2015 was modest.

American’s PRASM on its Pacific routes fell 13.5% and yields sank 14% on a 33% jump in capacity. During the last year and a half American has made a push from its hub in Dallas/Forth Worth to Asia, adding flights to Beijing, Hong Kong, Shanghai, Seoul and Tokyo Narita, which is driving the outsized capacity growth relative to its peers. But American has a much smaller presence between the US and Asia than Delta and United, so it has been working to close that gap.

Mr Kirby stated that the USD appreciation and the lower surcharges had a particularly large impact on American’s Pacific performance; but maintained that American was pleased with its absolute demand to Asia given its own capacity growth and the currency and surcharge headwinds.

American benefits from ULCC price matching in the domestic market

American’s domestic PRASM dropped 6.2% in 2Q2015 and yield fell 5.3%. Capacity in the domestic market was up 2.3% year-on-year. Mr Kirby stated that PRASM in Dallas/Fort Worth fell 5% year-on-year.

American has seen outsized capacity growth in the Dallas market due to a massive expansion by Southwest from Dallas Love Field after the lifting of the Wright Amendment that prohibited certain long-haul flights. DFW is American’s largest hub measured by seats for the week of 27-Jul-2015 to 2-Aug-2015. 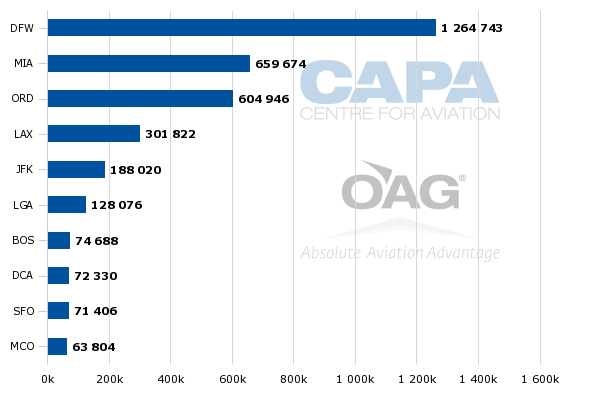 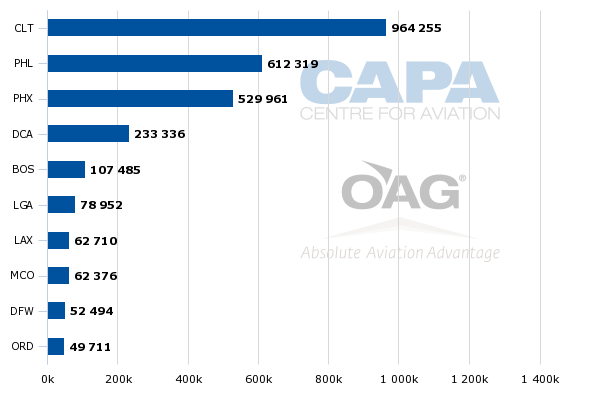 *Note: American and US Airways are in the process of merging

Queried about American’s performance in Chicago after United cited some weakness in the market, Mr Kirby said he would not identify Chicago as one of the weaker US domestic markets. He stated Chicago’s yields (American and United have hubs at Chicago O’Hare and Southwest is the largest airline at Chicago Midway) were better than the domestic average.

At the beginning of 2015 American cited pressure from Southwest and pricing challenges from ULCCs in some of its markets. It pledged to match that pricing and Mr Kirby stated that American has posted an improved PRASM in markets where it has matched ULCC fares.

He explained that as American matched those fares, its relative unit revenue performance from the local plus connecting markets was a bit better in a “world where the rest of the system was declining a bit”. Mr Kirby stated that American won back some of the market share lost to those airlines by not being cost competitive.

Although American’s 2Q2015 net income jumped 97% year-on-year to USD1.7 billion and its pretax margin grew 4.4ppt to 17.2%, the airline is fielding queries about when its PRASM will return to positive growth after forecasting a 6% to 8% decline in PRASM for 3Q2015. Those questions are leading discussions as to whether investors are too singularly focused on PRASM performance given US airlines are generally posting record results.

The balance of industry capacity for 2H2015 looks much like 2Q2015, Mr Kirby concluded. And while there is some easing of currency pressure in 4Q2015, it is not enough to overcome the 7% PRASM decline American posted in 2Q2015.

Capacity trends for 1H2016 look similar to the back half of 2015, which led Mr Kirby to conclude that a reasonable timeframe for a return to positive PRASM growth would be sometime during 2H2016.

Breaking down to basic mathematics the passenger unit revenue declines, American CEO Doug Parker stated that the results stem from capacity outstripping demand, which he concluded is not unexpected given that the largest cost airlines have to bear (fuel) has fallen close to 50%.

Mr Parker stated: “What is nice to see is that revenues have fallen nearly as much as costs and a result earnings are growing.” American is projecting 5% growth in mainline unit costs excluding fuel for 2015.

Offering more commentary about the intense investor focus on PRASM declines, Mr Parker stressed that American would have not repurchased USD753 million of stock during 3Q2015 at an average price of USD43.54 if the airline did not think it was worth more than the trading price.

American during 27-Jul-2015 was trading at approximately USD40.56 compared with USD43.83 for Delta, USD56.75 for United and USD35.03 for Southwest. American’s P/E of 7x is the lowest among its large US airline peers. Mr Parker remarked that the market will do what the market will. If investors continue an intense focus on unit revenue performance, then it would allow American to buy back more of its stock.

During 1H2015, American returned USD1.1 billion to shareholders; this includes USD943 million of repurchased shares that was part of a USD2 billion share buy back approved in Jan-2015.

The company’s board has approved an additional USD2 billion repurchase programme set for completion by YE2016.

It is not clear if or when investors will shake their obsession with US airline passenger unit revenue declines. For now it seems the argument by airlines that investors should focus on margin expansion and overall profitability has not totally convinced the investment community.

American in particular has a bit more to prove until it complete its merger integration with US Airways. Up to this point the process has been reasonably smooth, and the airline is taking great care to ensure that continues with the complex reservations system cutover in 2H2015.

But investors have no historical reference to allay their fears that airlines can sustain their current performance or quickly regain unit revenue traction if oil prices suddenly rise.

As previously reported by CAPA, US airlines still have some bumpy road ahead as they complete their transition to viable, long term investment grade entities. The latest investor caution over unit revenues is perhaps a byproduct of some remaining uncertainty that airlines will fully deliver on their promises to run their businesses as high quality industrial firms.

See related report: The US airlines' new era of profitability offers a new basis for sustainability. What will unions do?