American Airlines and US Air down, GOL and TAM surge – Stock Wrap

American Airlines’ shares dropped back 0.9% on Friday, as the carrier forecast a 16-17% reduction in 2Q2009 mainline unit revenue (see below). The reduction is not as bad as United’s expected up to 18.9% reduction in PRASM this quarter.

Shares in Brazilian carriers, GOL and TAM, surged 5.5% and 4.0% on Friday on an improving demand outlook. ANAC stated domestic demand in Brazil was down (only) 5.4% year-on-year. GOL’s shares closed at their highest level since 19-Jan-2009.

NB: America Airline Daily is now ON SALE! Buy an annual subscription by the 4th of July for just USD395 p/a! 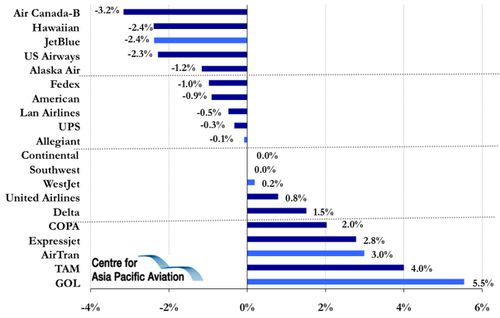 The following is an extract from American Airlines’ Securities Exchange filing on 18-Jun-2009: