American Airlines and United: high hopes for Africa in 2020

Two of the most closely watched routes from the US in 2020 will be United’s recently introduced fight from Newark Liberty International airport to Cape Town and American’s upcoming service from Philadelphia to Casablanca.

In some ways, United’s service to Cape Town is the culmination of a strong effort by a partnership of local tourism and private sector partners in South Africa to add new international routes and airlines, and expectations for the service remain high.

American’s planned new flights to Casablanca are tied to its new relationship with Royal Air Maroc, and appear to be the beginning of a service expansion to the African continent as American evaluates the opportunities for more direct service to other destinations other than Casablanca.

United’s three weekly, seasonal flights from its hub in Newark to Cape Town debuted in Dec-2019, and the route is a milestone, marking the first direct flights to one of South Africa’s largest cities and tourist destinations. As it markets the flight, United has touted that the nonstop route saves approximately four hours of travel time for customers.

The 6,793nm, approximately 14h, flight seems like an ideal market for United’s 242-seat Boeing 787-9 twin aisle aircraft, the service being a long thin route that is not arguably suited for a larger jet.

Cape Town has attracted a slew of new airlines during the past two to three years, largely driven by the efforts of the Cape Town Air Access initiative, which is composed of the city of Cape Town, local and South African tourism authorities, Wesgro (tourism, trade and investment promotion agency for Cape Town and the Western Cape), and private sector partners. During the past couple of years Cape Town has attracted new flights from Austrian Airlines, Cathay Pacific and Rwandair.

According to CAPA's sister publication Routesonline, Enver Duminy, the CEO of Cape Town Tourism, has estimated that during the route's first year of operations the new flight should generate 24,000 additional inbound passengers to the region, travellers from the US will grow by approximately 20%, and 900 new jobs will be created.

Early results for United look promising. The Points Guy has reported that United has opted to resume the seasonal Cape Town service for the 2020-2021 season.

The new service is a boon for Cape Town, which has no direct service to North America; its largest international region measured by ASK deployment is Western Europe, followed by the Middle East. 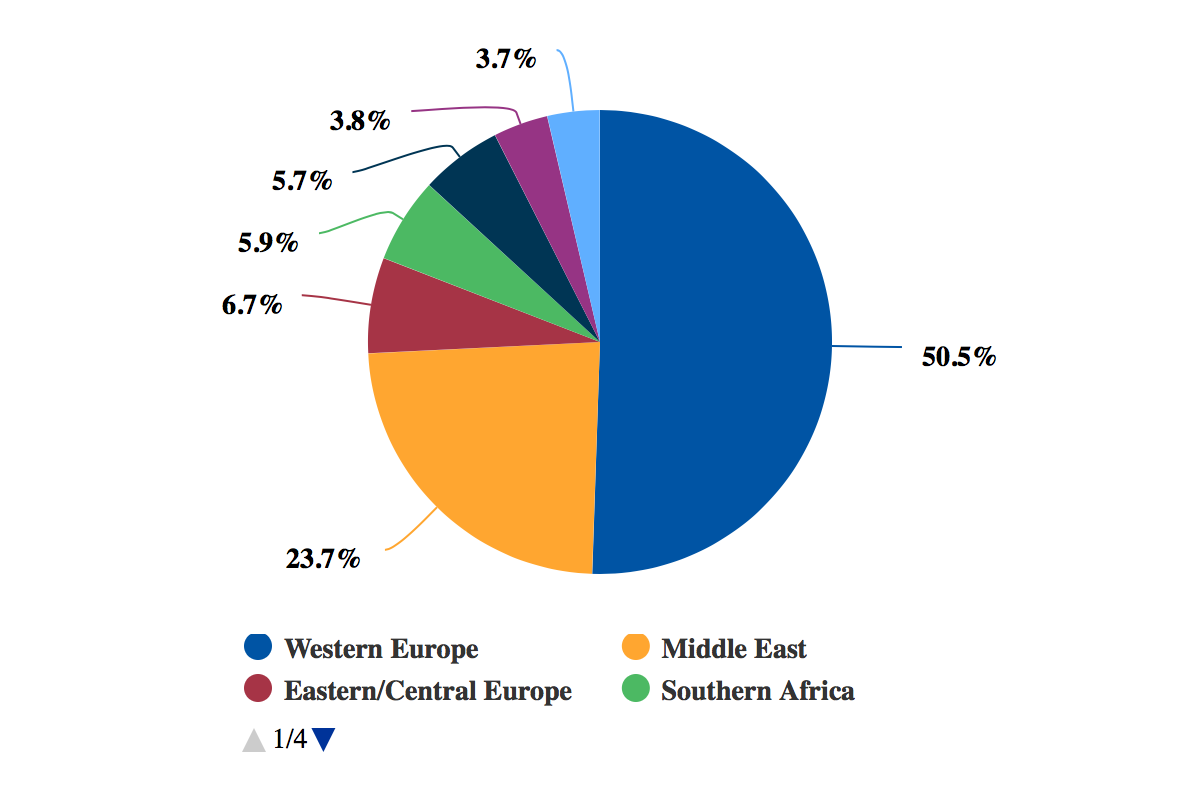 American Airlines is entering the African market in 2020 with the launch of service from its hub in Philadelphia to Casablanca, and plans to operate a Boeing 757-200 on the 3,2213nm flight.

During the past couple of years American has used Philadelphia as a launch pad for secondary trans Atlantic markets, including to Budapest, Prague, Berlin and Dubrovnik. Other experimental markets have not been as successful, as an example – Bologna.

American recently forged a codeshare with Casablanca’s largest airline Royal Air Maroc, which is scheduled to become an alliance partner of American when it joins oneworld in early 2020. Royal Air Maroc operates flights in the US: to Boston, Washington Dulles, Miami and New York JFK.

Casablanca International airport percentage of seat deployment by airline, as of late Dec-2019 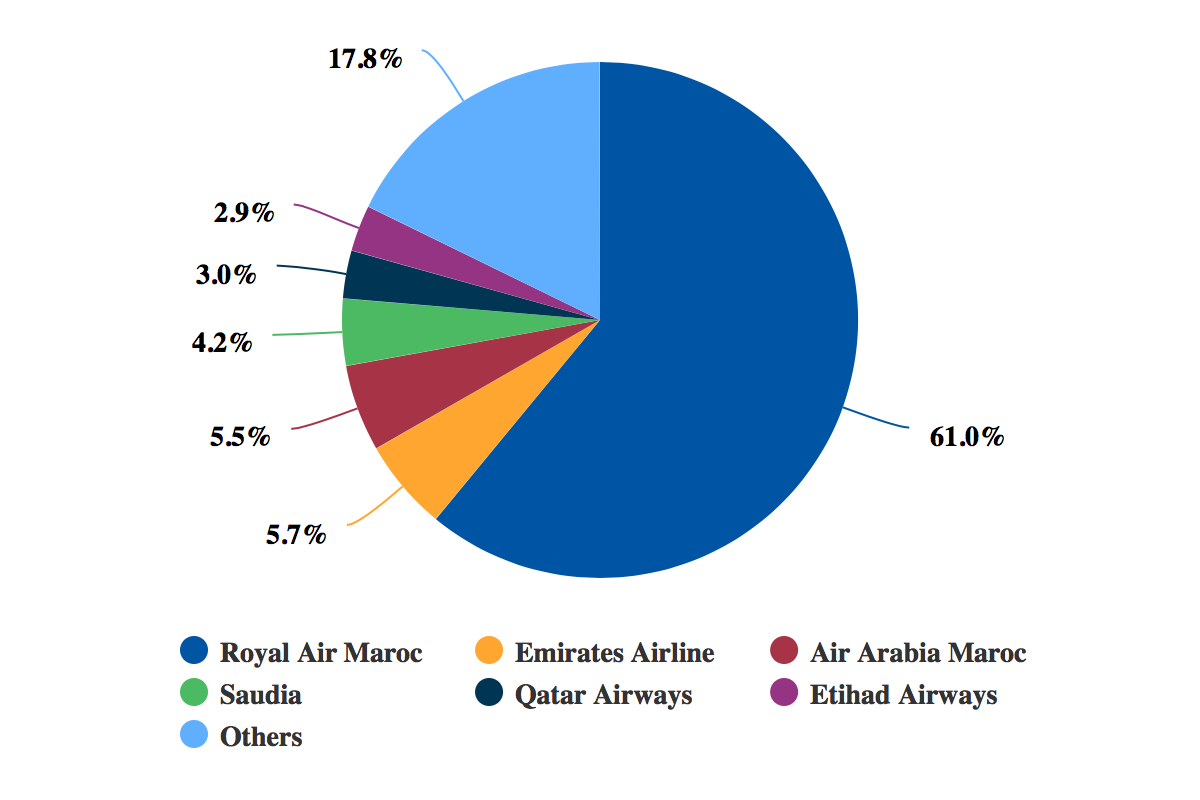 With the new service to Casablanca, American can market points beyond Morocco to other points in Africa, but at some point American believes it could start serving destinations such as Accra, Ghana, nonstop.

American VP of network and schedule planning Vasu Raja has previously told The Philadelphia Inquirer that once it identifies connecting demand in some of the hubs of the airline’s international partners, “…the next logical thing for us to do is to go fly there nonstop…this is really the start of trying to develop the African continent over the next several years”.

However, it appears if direct connections to some of those African points do not meet American’s performance expectations, the airline will quickly exit those markets and revert back to serving them through its partner on the African continent, Royal Air Maroc.

American and United are taking different approaches to their new service to Africa.

American is leveraging a new partnership to determine if, at some point, it can add direct flights to other destinations on the continent. And while United is partner with South African Airways and Ethiopian Airways in the Star Alliance, neither one of those airlines has a dominant presence in Cape Town measured by domestic ASK deployment. 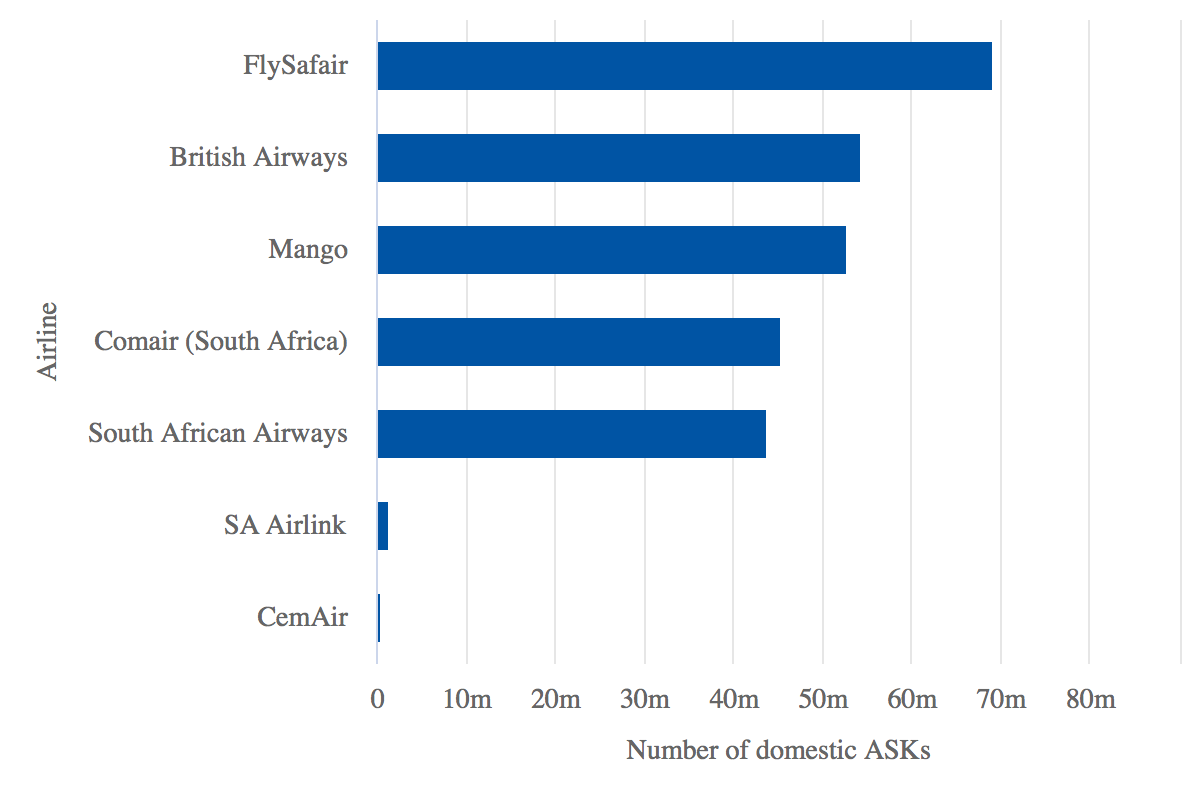 United, in partnership with tourism and economic authorities, obviously believes that there is enough demand to sustain direct flights to Cape Town. The airline has also trumpeted one-stop connections through Newark from more than 80 US cities to Cape Town, and connections to those markets on the incoming flights. For United, Newark is the focal point for its new service to Cape Town.

US airlines believe there is promise in making an investment in Africa, for now

United and American are taking a different approach to serving the African continent but for now seem poised to make a solid commitment to the region, and United’s pledge to bring back seasonal service to Cape Town for the 2020-2021 period is no doubt encouraging.

But it will be a matter of how those airlines develop their strategies – how American and United will ultimately craft their respective footprints in Africa.

For now, they believe the opportunity on the continent warrants an investment in service. But if the returns on those investments do not materialise in a satisfactory period of time, those airlines may need to turn their attention elsewhere.