The airline distribution war is entering a new phase, as American Airlines and Sabre initiate formal legal proceedings. This follows a series of duelling press releases and humourous American Airlines ads against Orbitz. On the sidelines - and soon to be more centrally important - Google’s flight search is attracting considerable attention.

The industry waited with bated breath for the next chapter in the distribution wars as the deadline for American’s lawsuit hiatus against Sabre expired yesterday. It didn’t take long for the two to launch duelling press releases announcing mutual legal action. American tipped its intention to continue playing hardball last month and now has responded by adding Sabre to its antitrust suit against Travelport.

Sabre has responded, adopting the role of white knight in protecting fee transparency for consumers. Meanwhile, each party says it is continuing to negotiate to reach a compromise. Just as American and US Airways are seeking damages against Sabre, the GDS is also seeking an injunction against American’s marketing efforts with the travel community on Direct Connect but said it will, for now, not bias its displays against American so long as the restraining order gained by American in Jan-2011 remains in effect. American’s distribution contract with Sabre ends on 31-Aug-2011.

In its media release, Sabre maintains American is attempting to eliminate global distribution systems by refusing to provide full content to GDSs resulting in reduced competition: “Having failed to gain market acceptance of its Direct Connect product, AA chose to go outside the bounds of fair competition by leveraging its monopoly position and by engaging in trying to ... force travel agencies to take a product they do not want,” said Sabre Travel Network Senior Vice President Chris Kroeger. “These actions violate the law and impose substantial harm on our company and the travel agencies, consumers and corporate customers we serve, compelling us to take today’s legal action.”

Travelport has meanwhile asked the court to dismiss American’s suit against it, in its first response to American’s legal action to date. Travelport called American’s action “unabashedly an effort to secure a more favourable position vis-à-vis Travelport Limited and Travelport, LP before the current round of contracts between the parties expires later this year”.

It said contract negotiations have stalled because Travelport would not yield on “certain commercial terms”. It also asked the suit be transferred to either a federal or state court in Illinois where the pair’s other actions are located. Finally, it said the damage caused to Orbitz by American’s “bullying” has been substantial, having lost half its market capitalisation since American pulled its content last December. The damage to Orbitz' share price has indeed been significant:

But during its first quarter earnings call, CEO Barney Harford indicated the loss of American seems to be hurting American more than Orbitz ,since the company has been able to replace half of the revenue once earned from American with other airlines. He also noted that onsite search volumes for air travel held firm year on year.

“This is not a genuine antitrust action brought by consumers suffering from excessive or artificial price increases,” Travelport argued to the court. “It is an opportunistic lawsuit brought by a large and powerful company seeking to enhance its already substantial commercial bargaining leverage."

Sounding much like Sabre’s Mr Kroeger, Travelport said: “Stripped of its antitrust pretext, AA’s real complaint is that the marketplace has not embraced AA’s unproven and inefficient direct connect technology and that GDSs remain highly valued by many airlines and travel agencies.

“GDSs ... compete intensely with each other on price, quality, and content to encourage both airlines and travel agents to continue using their services. GDSs also vigorously compete with other distribution channels that now account for a majority of air ticket distribution in the United States.  Contrived market definitions cannot mask these contemporary business realities,” he argued.

Travelport also said that occupying less than 50% of the distribution marketplace means it does not dominate distribution, as alleged by American, a fact also noted by the Departments of Transportation and Justice.

At the same time, American released a cheeky commercial against Orbitz saying it is missing its 3400 daily flights in its search listings, that, of course, can be found on AA.com. American pulled its content from the OTA last December. TNooz reports it was first posted on YouTube but will be aired on business and entertainment networks including MSNBC, CNN, TNT, Discovery and ESPN.

See the American Airlines commercial: "A Whole World is Missing"

Among the charges in its legal action, Sabre argued American is engaging in anti-competitive conduct by trying to force travel agents and management companies to sign up for its Direct Connect programme. Sabre said the carrier is using its “monopoly position over air transportation out of its hubs and between many US and Caribbean cities, and to gain a monopoly position in air booking services”. It added that American is forcing Direct Connect on travel intermediaries which constitutes illegal “tying”.

“Our preference was to extend the current legal ‘stand down,’” said. “However it is apparent based on AA’s actions that Sabre has no choice but to pursue legal remedies. In parallel, we will continue to pursue through negotiations a distribution agreement with AA that meets the needs of all constituents.”

American retorted by adding Sabre to its current lawsuit in the US District Court for the Northern District of Texas, seeking to “stop exclusionary, anti-consumer and anti-competitive business practices of the defendants and recover monetary damages that American has incurred as a result of these harmful actions”.

In response to Sabre’s action, American said it was “meritless” and “a spurious attempt to distract the public and its subscribers from the serious implications of its own anticompetitive behaviour”.

“Anyone who logs on to Priceline today can readily see that American Airlines direct connect does nothing to prevent effective comparison shopping between American and its competitors,” said the airline in its statement. “Ironically, the GDSs themselves offer numerous products that allow agencies to integrate information from multiple sources, including direct connects, in a seamless and fully transparent manner, but they have put in place rules that try to prevent travel agents and technology providers from doing so with American’s direct connect. In fact, one of the things American is trying to accomplish with its lawsuit against Sabre and Travelport is to make sure that consumers and travel agents can compare American fares with fares they obtain from their GDS.”

American also noted its support for increased fee transparency as evidenced by its filing during the recent DoT consumer rule-making process. DOT is working on a new rule regarding distribution system listings and fee transparency.

“We believe the evidence in this case will quickly debunk Sabre’s claims, which appear to be nothing more than an attempt to misdirect attention from the real issues,” said the carrier. “This dispute is not about any imagined effort by American to hide the true cost of its services. Instead, this case is really about whether American and its customers can finally benefit from new competition, technologies, and efficiencies in the distribution of services. Of course, it is also now widely known that US Airways, another large airline and Sabre customer, has filed similar antitrust claims against Sabre.”

In widening its antitrust lawsuit against Travelport to include Sabre, American reiterated the fact that the Departments of Justice and Transportation acknowledge the power of GDSs and reminded the court that DoJ is currently investigating GDS practices of Sabre and Travelport. The airline also said that the two giant GDSs control over 90% of bookings in the US and are an “essential link to travel agents and many consumers”.

Also claiming the role of white knight, American said the practices of the GDSs harm consumers and travel agents and suppress innovation. It complained about their “anti-competitive conduct to protect their market position from new competition by alternative technologies that are both less expensive and more capable, including aggressively suppressing the ability of travel agents to seek alternative methods to book tickets directly with airlines using direct connections with airlines”.

Finally, it charged that GDS’s high, “supra-competitive” fees forced airlines to charge higher fares, adding that it has tried to reach agreement over several months to resolves the dispute.

Google enters the fray, as a sideline player - for now

Google’s entry to the distribution equation is quite simple and really is only for checking schedules between airports or at a given airport. Clearly it has not (yet) leveraged the technology acquired when it was cleared by antitrust authorities to complete its deal with ITA Software earlier this year. The industry has been anxiously awaiting that impact for how it will change travel distribution.

On Google's useful search page, typing in “flight from (city) to (city)," only displays non-stops. No connections or one-stop (direct) itineraries are shown. For a list of all non-stop flights from a given airport, it is only necessary to type in flights and the name of the city or airport. For multiple airport cities, the city code will do just as well. 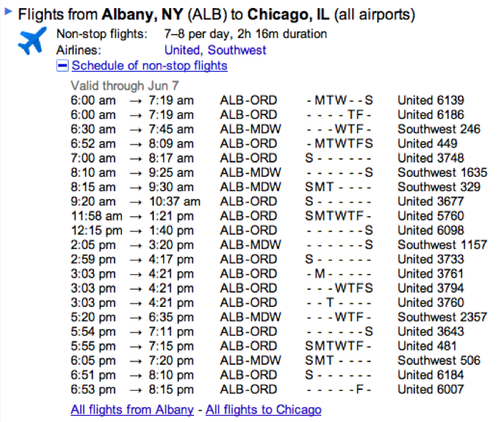 There are no fares to compare, so this will only be good for those who used to pull out the pocket OAG to find ways to escape delays or cancellations. But this is clearly only Google dipping its toe in the water. It has access to much more valuable data than it is currently displaying.

NOTE: CAPA Profiles on this website also display selections of ITA's fares data for selected city pairs. Simply select an airport and the "Fares" dropdown menu to see a selection of upcoming economy and premium fares on a range of city pairs.

So long as Google - or another external player still to announce itself - is waiting in the wings, he major airlines and the GDSs may be fighting yesterday's battle. The industry will have to wait longer to see if the new world offerings make all the law suits moot.