American Airlines and Delta: the worst is over for Latin America’s weak revenue performance

Latin America has been a weak spot for airlines for more than a year; Brazil’s economy has crumbled and currency fluctuations have driven weakness in demand in some of the region’s other countries. But two of the US’ large global airlines, American and Delta, believe that Brazil in particular has reached an inflection point, and they sense a slow improvement occurring on routes to Brazil due to a rationalisation of capacity in those markets.

After steep revenue declines in its Brazilian markets, American expects it could post positive unit revenue results in those markets during 3Q2016, while Delta is citing positive trends for its Latin American entity that should continue into 2017.

Of course, it will take some time for airlines to reach the levels of revenue performance they enjoyed before Latin America’s economy began to contract, but the start of the slow climb out of the revenue doldrums is a welcome sign for a region that remains one of the most promising over the long term.

American welcomes a bottoming-out of tough revenue conditions in Brazil

Latin America in 2016 faces its second consecutive year of economic contraction driven by Brazil’s recession. Brazil’s own economy is also poised to contract for a second year in a row, and the ripple effects of the country’s economic and political turmoil have resulted in crumbling demand for air travel to and from the country, and within it. 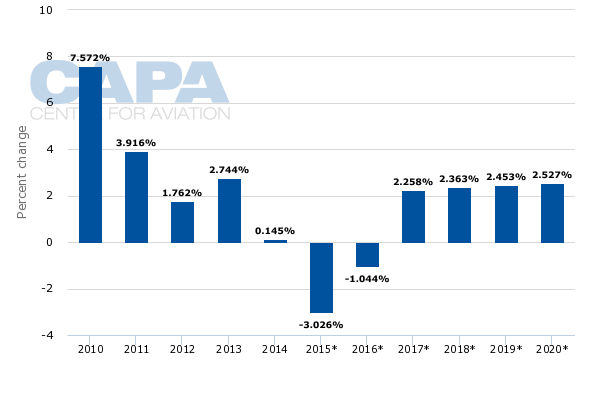 American has historically been the largest US airline operating between the US and Brazil and it still holds the leading position between the two countries based on seat deployment, with a 37% share for the week of 19-Sep-2016.

The airline has cut its capacity to Brazil by between 35% and 40% since 2014, and that includes the elimination of five markets – Salvador, Recife, Porto Alegre, Campinas and Curitiba.

American’s Latin American unit revenues and yields fell sharply year-on-year from 4Q2015 through 2Q2016, but did show some sequential improvement from 1Q2016 to 2Q2016.

Recently American management stated that during 2015 the airline was surprised that some airlines operating between Brazil and the United States had increased capacity by double digits in 2015, but during 2Q2016 industry capacity in the market actually started to decline. The company projects deeper industry capacity decreases from the US to Brazil in 3Q2016 and 4Q2016.

As a result of the industry right-sizing capacity to Brazil, American stated that its passenger unit revenues (PRASM) on routes to Brazil had declined 13% in 2Q2016, versus an average of 35% while industry capacity was higher. Due to a boost from the Olympics held in Rio in Aug-2016, American expects to post a positive PRASM performance on routes to Brazil in 3Q2016 and the company stated that it could possibly achieve a positive result in 4Q2016. Obviously American’s PRASM has a long trajectory before it reaches pre-recession levels, but the company’s executives are encouraged by the fact that the deteriorating conditions have bottomed out.

Delta has the smallest seat share among the large three US global network airlines between the US and Brazil, and during 1Q2016 the airline estimated that its capacity to Brazil had fallen by 30% from peak levels.

Delta posted a sequential improvement in its Latin American PRASM from 1Q2016 to 2Q2016, and the company noted that Jun-2016 marked the first time it had posted a positive PRASM for the region in 26 months.

Delta stated that the positive unit revenue result for the last month of 2Q2016 had occurred as its unit revenue declines in Brazil moderated to 4%, driven by moderating currency depreciation and capacity reductions.

Throughout 2016 Mexico has been a strong performer for Delta, and in 2Q2016 the airline recorded a four point increase on unit revenues for its Mexican routes. Delta has also cited solid demand to the Caribbean, and expects favourable unit revenues in that region in 3Q2016 as the company starts to lap its own capacity increases, which occurred in the period year ago.

At the end of 2Q2016 Delta forecast that its Latin capacity would decline two to three points, and “we expect this entity to inflect in RASM [revenue per available seat mile] as early as the September quarter on reduced currency pressures, strengthening demand and reduced capacity offering”, stated Delta president Glen Hauenstein.

Delta CFO Paul Jacobson recently stated that Delta expects the positive revenue trends to continue into 4Q2016 and into 2017. Much of Delta’s revenue strength in Latin America is driven by Mexico, where it has been working more closely with its fellow SkyTeam partner Aeromexico ahead of the two establishing a cross-border joint venture.

The two airlines expect US government approval for the tie-up in 4Q2016 after gaining approval from the Mexican government – contingent on the airlines relinquishing eight slot pairs at Mexico City Juarez international airport.

Mr Hauenstein said in Jul-2016 that the strength of Delta and Aeromexico in the US transborder market was resulting in Delta gaining a higher share of corporate travel to and from Mexico than the airline historically retained.

Combined, Aeromexico and Delta represent a 26% seat share between the US and Mexico for the week of 19-Sep-2016.

If the joint venture is approved the two airlines can cooperate on pricing and scheduling, and operate nearly as a single entity in the Mexican transborder market. Once the US government approves the joint venture, Delta plans to up its stake in Aeromexico to 49%, which will result in Delta having more influence in directing Aeromexico’s strategy.

In order to gain final approval from the US government Aeromexico and Delta may have to relinquish additional slots at Juarez International. jetBlue and the Mexican ULCC Volaris have spoken out about the disproportionate number of slots that Aeromexico and Delta will hold at Mexico’s largest airport and gateway.

JetBlue is urging regulators evaluating Aeromexico and Delta’s ATI request to require the divestment of 30 slot pairs at Juarez in order to ensure that smaller airlines can compete effectively against the larger airlines dominating the Mexican transborder market.

Despite its recession Brazil remains a key market in Latin America, and American remains well-positioned to capitalise on a true rebound in demand – whenever that occurs.

Delta’s rebound in the Latin American market is underpinned by its performance in Mexico, which could strengthen once it creates a joint venture with Aeromexico. But before that occurs Delta and Aeromexico could be required to make more concessions to ensure a level playing field in the US-Mexico market.