Similarly to fellow ULCCs and other US airlines, Allegiant Air’s financial foundation remains solid even as investors continue to zero in on an inflection point for industry wide-sagging unit revenues. During the past couple of years Allegiant’s leverage has decreased, the company’s returns have remained steady and shareholder returns have grown.

Airlines operating all types of business models realise the importance of keeping costs in check in order to sustain a strong balance sheet, and Allegiant is no different. After a strong cost performance in 2015, Allegiant has previously guided to possible unit cost inflation in 2016, but its 3Q2016 projections are now more favourable than expected, which should result in an adjustment to expectations for full year 2016.

Allegiant’s transition to an all-Airbus operator by YE2019 fleet should create cost tailwinds for the airline in the future, stemming from lower fuel costs and the efficiencies of operating a single fleet. The company broke precedent earlier in 2016 with an order for new-build Airbus narrowbodies, and is working to adjust its projections for capital expenditures accordingly. 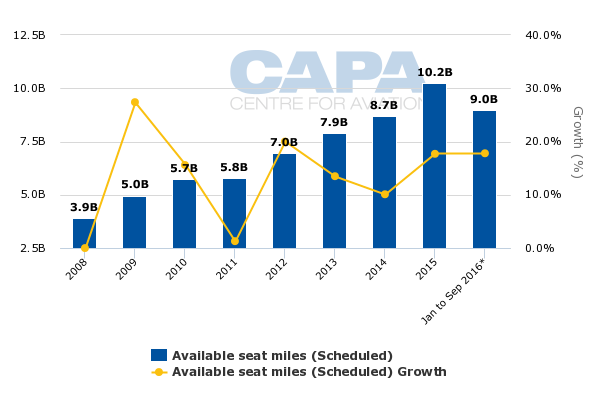 Allegiant’s shareholder returns have also steadily grown during the past few years, both share buy-backs and dividends. However, the company’s management owns more than 20% of the company, and enjoys a solid portion of the returns generated by Allegiant.

After years of talks with Airbus, Allegiant finally gets a favourable price for new-build jets

Allegiant made a somewhat unprecedented move in Jul-2016 by placing an order for 12 current generation, new-build Airbus A320s scheduled for entry into service in 2017 and 2018.

A pillar of Allegiant’s strategy has been to obtain used aircraft due to favourable ownership costs, but obviously end-of-line production aircraft offer attractive pricing options. Allegiant executives stated the company has been in discussions with airframer Airbus for close to twelve years. “They [Airbus] finally met our price”, said Allegiant COO Jude Bricker.

Source: CAPA Fleet Database
Orders include those placed directly by the operator and by lessors assigned to the operator, from 13-Oct-2016 onwards.

Allegiant has stressed that the order for new-build Airbus jets does not signal a shift in strategy from primarily taking on used aircraft. The order was more of an opportunistic deal for Allegiant, allowing the airline to accelerate the transition to an all-Airbus fleet in 2019 instead of the previously targeted timeframe of 2020 to 2021.

Previously, Allegiant has estimated a USD1 billion expense in transitioning from a primarily MD-80 fleet to Airbus narrowbodies, but with the new order placed in Jul-2016 those costs will grow. Mr Bricker has explained that capital expenditures on the new aircraft are higher than used jets, stating, “and as we transition, this is a complicated exercise to transition from one fleet to another”.

The company has not updated its capex guidance beyond 2016; but its capital expenditures for 2017 and 2018 will be higher than the planned USD360 million for 2016. Allegiant has previously estimated capex spend of USD210 million in 2016, but expanded its estimates by USD150 million to account for pre-delivery payments to Airbus, and capitalising expected Airbus major maintenance expenses. The airline is facing its first round of heavy maintenance on its existing Airbus fleet in 2016, with an estimated cost of USD20 million.

Allegiant has concluded that it would obtain favourable financing rates for its new Airbus jets, pointing to a supportive debt finance market. The company also stated that although the order will result in increased capex, its cash consumption would not change. Allegiant CEO Maurice Gallagher recently explained, “in fact, it might even be a bit better in the absolute because of the ability to finance newer airplanes even more so than the used airplanes”.

After Allegiant outlined its deal with Airbus for 12 new A320 current generation narrowbodies, the company announced a public offering of USD300 million in senior notes due in 2023. Planned proceeds from the offering were intended for aircraft acquisitions, and pre-delivery deposits and purchase prices for the 12 new Airbus jets.

Allegiant subsequently withdrew the offering, citing adverse market conditions. The company stated that it would continue exploring raising both secured and unsecured debt, when available on acceptable terms.

Prior to Allegiant’s decision to pull the debt offering, the ratings agency Moody’s had assigned the USD300 million notes a B1 rating, which is speculative. The agency, which has estimated capital outlays for Allegiant at more than USD800 million through 2019, stated that the cushion in debt and financial leverage metrics Allegiant has sustained since it was first rated by the agency in 2014 could shrink due to the investment required for the Airbus jets.

However, Moody’s also concluded that while the Airbus jets cost significantly more than previous investments in the MD-80s, the A320s have a lower operating costs per passenger than the older aircraft, which should support earnings and future cash flow.

Allegiant’s unit costs of USD5.74 cents (excluding fuel) in 2015 were among the best in the US airline industry, and below the benchmark of USD6 cents that delineates ultra-low cost airlines. But Allegiant is facing cost inflation in 2016, and has previously offered a forecast for unit costs excluding fuel in the range of flat to an increase of 4%. However, the airline recently refined its cost guidance for 3Q2016 from a rise of 4% to 6% to an increase ranging from 0.8% to 1.2%.

In addition to the maintenance expense from its Airbus fleet, Allegiant has also cited cost pressure from labour productivity issues, driven by crews transitioning from MD-80 to Airbus narrowbodies. The company has estimated that it takes approximately one month to train a new pilot hire, and it is working to compress the training time.

The reason for Allegiant’s downward revision to its 3Q2016 unit cost guidance is not entirely clear. Starting in 2016, the company is transitioning from a direct maintenance expense for its Airbus narrowbodies to a deferral method, which is basically capitalising and amortising the heavy maintenance to the next extensive maintenance check – the method adopted by the majority of the US industry. The change could be a possible factor in Allegiant’s revised unit cost forecast.

Allegiant’s revised 3Q2016 cost forecast should result in a revision for the full year 2016, which should ensure that the company keeps its unit cost inflation in check. Maintaining a favourable cost performance is an important driver for Allegiant, and all airlines maintaining their stable balance sheets. Over the longer term, once the transition to an all-Airbus fleet is complete, its cost performance should improve.

Despite unit revenue pressure, Allegiant's cost base will persist over the long term

Also like those of many other US airlines, Allegiant’s share price has been pressured during the past year, driven in part by investors' concern about soft domestic US pricing. Its share price in mid-Oct-2015 was USD218.93, versus 149.42 in mid-Oct-2016.

Allegiant’s annual ASM growth is slowing in coming years compared with 2015 and 2016 as it works to complete its transition to an all-Airbus fleet earlier than expected.

Its lower growth targets should ease some investor concern over high growth targets while unit revenues remain negative. In the long term Allegiant stands to benefit from operating a single aircraft type, which should be beneficial in preserving its ultra-low cost base.