Only COPA and Allegiant (both up 1.9%), with Chile’s LAN slightly in positive territory, were immune from the losses that afflicted the US and other Americas’ markets on Friday 30-Oct-2009.

After a 9.4% fall the previous day, Air Canada B shares lost a hefty 12.0%, as the effects of last week’s closure of the carrier’s public offering, pursuant to which it sold to an underwriting syndicate 160.5 million units for aggregate gross proceeds of CAD260 million (USD244. million).

The NY Stock Exchange’s Airline Index was off nearly three points on the day and some six per cent for the full week.

Allegiant, with the country’s most unusual model, had earlier in the week reported a profit for 3Q09, with a result of USD13.8 million, for a margin of 16%, on revenue of USD133.1 million, deriving approximately one third of its revenue from ancillaries, thus helping to offset consumer reluctance to pay higher headline fares. Friday continued Allegiant’s strong improvement, even as the wider market went into steep decline. 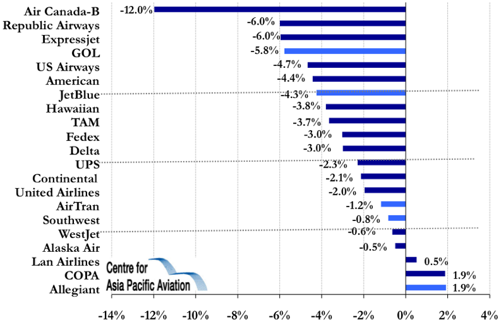